JOHN GOLDFARB, PLEASE COME HOME !—-so we can kill you: if this 1965 dreckwreck isn’t the worst example of a major studio comedy from its era, it’s not for lack of trying. There were talented people involved, but none of their skills show in the brontosaurus egg they laid. A Cold War farce, so bad it’s a wonder it didn’t start a hot one.

William Peter Blatty wrote it as a book in 1963: the satire—a takeoff on the infamous Francis Gary Powers incident and messed-up US foreign policy—was well-reviewed and successful in sales. He pitched it to Shirley MacLaine and her husband Steve Parker. They liked it, Parker produced, she starred, and J. Lee Thompson, who’d just managed a hit for the actress with What A Way To Go, signed to direct.

‘John Goldfarb’ (Richard Crenna), infamous for a football foul-up that nicknamed him ‘Wrong-way Goldfarb’, crashes his U-2 spy plane in the Arabian kingdom of ‘Fawzia’. Their idiot king (Peter Ustinov) will turn him and the aircraft over to the Soviet Union unless John agrees to coach a Fawzian football team. Undercover in the king’s harem is journalist ‘Jenny Ericson’ (Shirley MacLaine), who’d covered Goldfarb’s football flop. The State Department gets blackmailed, and Notre Dame’s famous football team must clash with Fawzia’s rookies. What a riot!

Catastrophically unfunny, insulting enough to Notre Dame that they sued 20th-Century Fox. The resultant publicity didn’t help and reviews were dire. After spending $3,705,000 to mount it, Fox took a cold shower when $7,000,000 came back, belly-flopping into 42nd place for the year.

A career low for all involved. You’d never know he’d won two Oscars for being delightfully sly (Spartacus and Topkapi) by watching Ustinov’s pathetic flailing as the monarch. It sets a benchmark as an affront to Arabs, perhaps equaled only by Mickey Rooney’s awful Japanese caricature in Breakfast At Tiffany’s. Crenna, familiar mostly from TV, was a good actor in both drama and comedy, but his opening shot as a leading man in features was flattened by this pancake. MacLaine could be charming when she toned it down (The Apartment ,Two For The Seesaw, Terms Of Endearment) but when Shirl cranked her volume to Shrill (Irma La Douce, What A Way To Go) it’s enough to make nails on a blackboard run for cover. Director Thompson has everyone yell constantly: it would be his worst movie if his post-1963 output didn’t offer so much competition (too many and too dismal to bother listing). Blatty, whose idea germ contaminated everyone, would go on to deliver The Exorcist, perhaps to purge this from a guilty conscience.

Also shipwrecked are supporting hardies like Harry Morgan, Fred Clark, Jim Backus and Wilfrid Hyde-White. John (then Johnny) Williams did the score, and MacLaine belt-squawks the title tune, an assault that tells you what you’re in for from the outset. 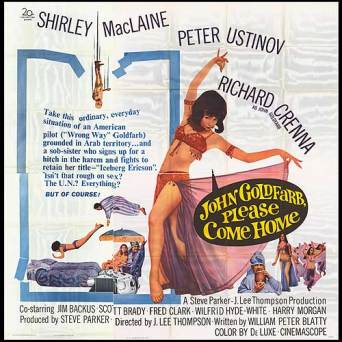