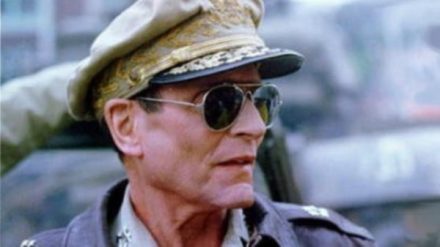 INCHON, the attractive South Korean port city, was the site of an ambitious attack in 1950, an audacious amphibious assault. Assorted A-words ascribed to the artistic achievement of the 1981 epic about the affair include asinine, atrocious, abysmal, agonizing—just plain awful all around. Worse, it’s so bad that it’s no fun. Aaargh…

The North Korean Army’s sudden plunge across the border into South Korea in June of 1950 caught the U.S.-backed country by surprise. After three months of pummeling, US Marines, under the command of Gen. Douglas MacArthur, staged a dramatic and daring end-run with a timed-to-the-minute landing at Inchon. This turned the tide of the war in favor of the U.N.—at least for a while. 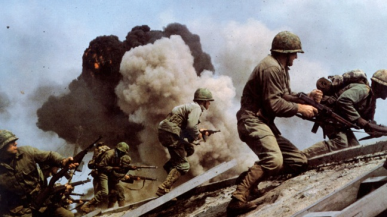 For the purposes of the movie, the ever-posing MacArthur is garishly impersonated by Laurence Olivier (a career low, though he scored a cool million bucks) and fictional characters are inserted via Jacqueline Bisset (think ‘Korean War’, she’s the first thing that comes to mind?), Ben Gazzara (practically narcoleptic), David Janssen (The Green Berets wasn’t enough? Sadly, he died during the production, a heart attack at 48), Toshiro Mifune (another legend bottoming out), Richard Roundtree (a long fall down a cold shaft), and last but least by a 38th Parallel mile, film critic Rex Reed as a reporter (Smirkosaurus Rex not sufficiently sated/humiliated by appearing in Myra Breckinridge). 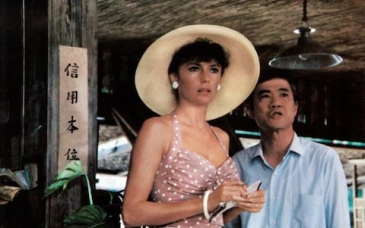 Is this a war or am I just dressed for one?

Actors and director Terrence Young were weeks into harness before they realized the big-scale battle bash was underwritten by batshit crazy Unification Church leader Sun Myung Moon, who picked this subject after mulling biopics of Jesus and Elvis. Christ, Presley, or hey, a battle in a war everyone wanted to forget? Insert $46,000,000. Press releases claimed the deceased MacArthur endorsed the movie from the spirit world. Another believer in fantasy, Ronald Reagan, then the most powerful man in the world (shiver..) displayed his intellectual, artistic and historical acumen by giving it a plug with a diary entry: “Ran Inchon—it is a brutal but gripping picture about the Korean War and for once we’re the good guys and the Communists are the villains. The producer was Japanese or Korean which probably explains the preceding sentence”. He was re-elected. 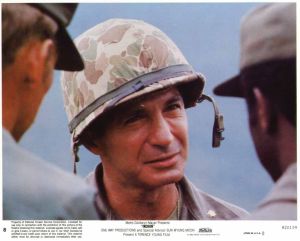 What am I doing here?

Ronnie’s US Defense Department contributed 1,500 troops to use as extras. Originally 140 minutes (death by boredom), it was promptly cut to 105, but nothing saved it from terrible reviews: despite $11,000,000 spent on advertising, crowds didn’t materialize. The gross in North America (Canadians actually went to see this?) came to an un-whopping $1,900,000; the total international rake was $5,200,000. The losses came to $44,000,000, one of the worst financial soaks in movie history. 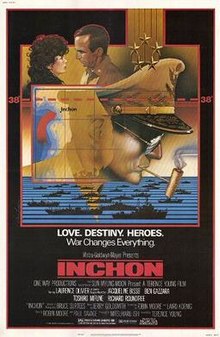 Terence Young was famed for directing Dr. No, From Russia With Love and Thunderball. Alas, Young’s more recent run had whelped dogs like Bloodline, The Klansman and War Goddess/The Amazons. That last opus featured another Inchon veteran, Sabine Sun, a French  blonde bombshell 25 years his junior Young married and featured in six movies; for this 1950-set war drama she’s outfitted with a low-cut dress fit for a Bond flick.

The acting, writing (Robin Moore did the terrible script), and editing all fall into the a-word salvo fired above. As for action, there’s a goodly amount, but it’s not well handled, either. Only composer Jerry Goldsmith comes out with any honor: his score, while far from his best, at least tries to make some drama out of the drivel. Meanwhile, history gets clobbered. The troops who made the perilous landing at Inchon deserved better. American history’s most overrated general got another undeserved sanctification. **

Other actors caught in the chum: Gabriele Ferzetti, Namkoong Wong, Karen Kahn (fed-up, she quit the business after this was released), Anthony Dawson (a long way from serving director Young as villain ‘Professor Dent’ in Dr. No), Lydia Lei and Mickey Knox. 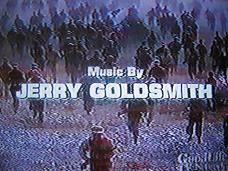 * Besides Goldsmith’s gallant work on carving a score for a ten-ton turkey, one other worthwhile item to emerge from the steaming pile was Olivier’s comment on why he participated (he took a cool million for the part) : “People ask me why I’m playing in this picture. The answer is simple. Money, dear boy. I’m like a vintage wine. You have to drink me quickly before I turn sour. I’m almost used up now and I can feel the end coming. That’s why I’m taking money now. I’ve got nothing to leave my family but the money I can make from films. Nothing is beneath me if it pays well. I’ve earned the right to damn well grab whatever I can in the time I’ve got left.” 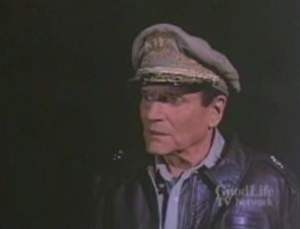 ** Your humble combat correspondent is no fan of Douglas MacArthur. He was extraordinarily lucky with his Inchon gamble, which could just as easily have been a monumental disaster. Just as he’d done in WW2 in The Philippines, “Dugout Doug” was caught like a deer in the headlights when North Korea launched their attack, and was walloped yet again a month after Inchon when China poured men into the fight. Olivier’s performance is pretty bad, but other portrayals of the egotistical officer by the likes of Gregory Peck (MacArthur), Tommy Lee Jones (The Emperor) and Liam Neeson (Operation Chromite), while less goofy (Peck’s is the best), haven’t adequately conveyed the man. 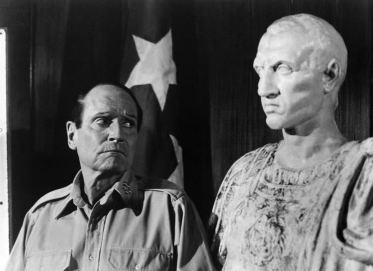