DR.NO failed in his plan to please SPECTRE by blackmailing the American space program, but his lair-demolishing defeat spawned one of moviedom’s all-time greatest success stories, a pop culture phenomenon as great as any history can offer. Ian Fleming’s sixth novel about the most derring of doers, published in 1958, hit the big screen in Britain in the fall of 1962, striking major pay-dirt in the States come spring of ’63. As the MI-6 armorer tells the hero, upon receiving his new weapon, the “Walther PPK, 7.65 millimeter, with a delivery like a brick through a plate-glass window”, so was the impact made by ‘007’ on the global moviescape of larger-than-life action adventures. 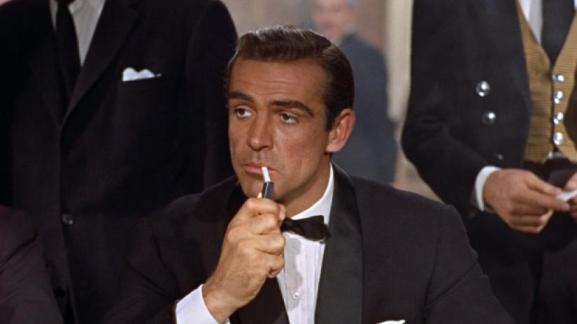 After their station agent and his secretary are murdered in Jamaica, ‘M’ (Bernard Lee), the head of the Britain’s Secret Intelligence Service, sends ‘James Bond’, Agent 007 (Sean Connery), to find out the why, and the who behind it. Dapper, dogged and more than a bit devilish, Double-O-Seven is also deadly, as Bond carries a ‘License to Kill’. That soon comes in handy when clues lead to a mystery man who runs private island ‘Crab Key’ with an iron fist—literally. Helped by C.I.A. operative ‘Felix Leiter’ (Jack Lord) and earthy Jamaican fisherman ‘Quarrel’ (John Kitzmiller), Bond has several perilous run-in’s with lethal underlings before finally confronting ‘Dr. Julius No’ (Joseph Wiseman) and discovering what the bad doctor has up his sleeves (if you know the movie, that pun is for free).

A definite Yes on the way to No is the Venus-like emergence from the steamy Caribbean of ‘Honey Ryder’ (Ursula Andress), who ends up with James as a guest delicacy for their weird host, the first in a long line of precisely spoken megalomaniacs who thrive in Bondland. Through the patient, measured tones of the diabolical genius, No informs 007 and delighted audiences that he works for SPECTRE, the “Special Executive for Counter Intelligence, Terrorism, Revenge, Extortion.”  He will shortly find, and we will relish for generations, that there is only one man who can deal with an outfit like that—this would be a good time to practice your feeble impression saying the name. “I admire your luck, Mister….?

Producers Harry Saltzman and Albert R. Broccoli had Richard Maibaum adapt the novel (Johanna Harwood and Berkely Mather contributed to his script), then picked the spirited Terence Young to direct. After considering Cary Grant, David Niven, Patrick McGoohan and several others, they made the crucial—and perfect—pick of 30-year-old Sean Connery, who they felt moved like a big predatory cat. Young helped him style and finesse the character, which Connery would then polish even brighter in the sequels.

Former Naval Intelligence Commander Fleming said of his creation that Bond “was a compound of all the secret agents and commando types I met during the war”, and with Connery’s sex appeal, magnetism and acting ability the karmic mix gave us one of fiction’s greatest heroes.  Bond is cultured and witty, wears the best-cut suits, gambles with skill (who besides a few rich knobs in Monaco ever heard of frickin’ ‘baccarat’ before these movies?), knows wine–and that you need to shake a martini, can deftly manage whatever sleek vehicle, wild gadget or neat weapon he’s given, travels to exotic locations, meets and beds beautiful women (even those working for the enemy), is cool under pressure and capable of remorseless brutal action when it’s time to dish it out to death-deserving dastards. *

Plus all he has to do is say his name or walk into a room and his incredibly Cool theme—the most internationally recognizable piece of music of all time?—plays on the soundtrack. Monty Norman wrote it, then the arrangement by a young turk named John Barry overhauled, using guitarist Vic Flick (a name you can’t make up) for the signature riffing. Barry is gone, we age rapidly: this kicker of all asses never gets old. **

Though the tongue was present in cheek, the plot and action aren’t so totally fanciful as to discount, lending just enough meat to the meal to make the dressings and dessert all the more tasty. To modern viewers it will seem quaint, but it was thrilling and sexy stuff once upon a yesterday, and ever brings a smile to us hobbling loyalists. Anyone, regardless of their inclination, who is not taken seriously aback by the sight of Ursula Andress on that beach, needs some invasive therapy. And if you’re so indifferent as to shrug over the introduction of Mr. Connery as Mr. Bond, there’s an ejector seat waiting for you. 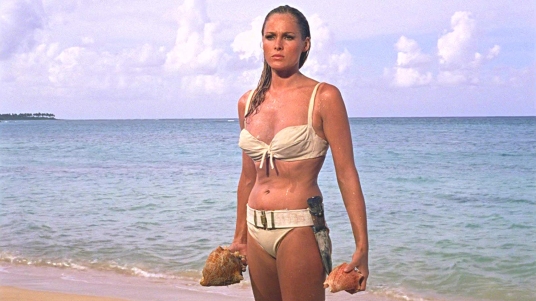 110 minutes, with Anthony Dawson (“You had your six“), Zena Marshal (the barely-wrapped ‘Miss Taro’), former ‘Miss Jamaica’ Marguerite Lewars (the nasty photographer) and Eunice Gayson, who—as ‘Sylvia Trench’, in the classic introductory scene—gets the honor of being the first ‘Bond girl’. Bernard Lee would go on to play crusty M eleven times, and Lois Maxwell (did you really think we wouldn’t mention her?) would be the ever-pining ‘Miss Moneypenny’ in fourteen of the capers. ***

* Fleming, responding to criticism: “Perhaps Bond’s blatant heterosexuality is a subconscious protest against the current fashion for sexual confusion. Perhaps the violence springs from a psychosomatic rejection of Welfare wigs, teeth and spectacles and Bond’s luxury meals are simply saying “no” to toad-in-the-hole and tele-bickies. Who can say? Who can say whether or not Dr Fu Manchu was a traumatic image of Sax Rohmer’s father? Who, for the matter of that, cares?”   Quite.

** David Arnold, who scored five of the later films, described the James Bond Theme as “bebop-swing vibe coupled with that vicious, dark, distorted electric guitar, definitely an instrument of rock ‘n’ roll … it represented everything about the character you would want: It was cocky, swaggering, confident, dark, dangerous, suggestive, sexy, unstoppable. And he did it in two minutes.”  My own pet theory–and I think it’s fully credible– is that, given the almighty reach of film into nearly every nook and crannie of the globe, it is quite likely more people have heard and can identify the James Bond Theme than any other piece of music ever written. No? Think about it. Countless millions of people in Asia, Africa and South America never had the opportunity—over centuries, mind you—to hear Beethoven, or, hell, take your pick—but 007?  Fiji to Finland, Ghana to Greenland, someone in an outrigger, on a donkey or by an igloo can tell you who that music is for.

*** Wiseman: “I had no idea what I was letting myself in for. I had no idea it would achieve the success it did. I know nothing about mysteries. I don’t take to them. As far as I was concerned, I thought it might be just another Grade-B Charlie Chan mystery.” Fleming styled Dr. No in the fiend neighborhood occupied by Sax Rohmer’s diabolical ‘Fu Manchu’, who’d been around pulp fiction in books and film since 1913.

Ursula: “It’s a mystery. All I did was wear this bikini in Dr. No –not even a small one — and whoosh! Overnight, I made it.”  The 26-year-old unknown from Ostermundigen, Switzerland was paid $6000 for the role. Her thick accent a problem, she was dubbed by German voice-over artist Nikki van der Zyl, who would do other such unaccredited, unsung jobs for numerous actresses in 10 Bond films. Vocal-schmokal, the face and body belong to Andress, the gasps and sighs belong to we who bear witness. In 2001 the bikini sold at auction for $59,755.

Young: “When you look back on it we were just damn lucky and everything worked. It was just one of those things. It could have gone exactly the other way, and they’d have been sunk without a trace.”