THE APARTMENT, which nearly every reviewer from Arkansas to Zimbabwe treats with the reverence accorded to a few people from the Bible, sad to say leaves this crabapple resorting to the old admonishment from Thumper to Bambi “If you can’t say something nice, don’t say nothin’ at all.”  After my recent look, probably the 5th time I’ve seen it, I went through a quick count of movies from 1960 and found 28 that I’d rather sit down with again than The Apartment, 19 of them in my personal stash. Tipping a hat to the elements that click, and hastening to say I like & respect much of the work—in this film and others—from many of those involved, this critical and box-office success, hailed as a classic, just doesn’t do too much for me. Or at least, it doesn’t bowl me over like it’s supposed to. “Shut up and deal…” 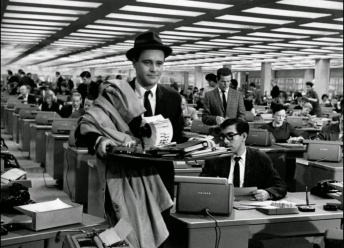 New York City, corporate jungle, carnal bungle, career ladder, spirit breaker. One of the serfs toiling his life away by tallying insurance stats for ‘Consolidated Life’ is ‘C.C. Baxter’ (Jack Lemmon), bachelor and schmendrick. He’s been cajoled/coerced into ‘lending’ his apartment to a smarmy squad of supervisors who use it for trysts they can hide from their wives and public exposure. In return Baxter moves up—to his own office on “the 27th floor”—where the deceit daisy chain reaches cobra-smiling Big Cheese ‘Jeff Sheldrake’ (Fred MacMurray). The boink that breaks the boys club buffet comes when the married Sheldrake’s occasional romp-mate is the charming ‘Fran Kubelik’ (Shirley MacLaine), an elevator operator who Baxter is smitten by. As with elevators, what goes up, must come down: what’s that 27th floor cubicle really cost, and is it worth it? 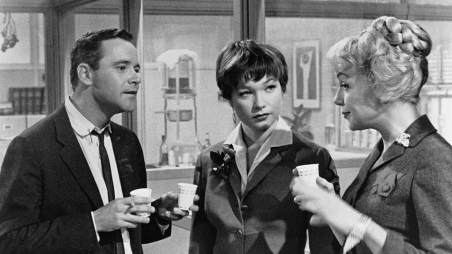 Lemmon’s terrific performance in Some Like It Hot had that hit’s taste-nudging director, Billy Wilder, and his co-writer I.A.L. Diamond, see him as the perfect modern urban Everyman mensch for a story idea Wilder had on tap for years, germinated by the 1945 drama Brief Encounter. Wilder & Diamond eschewed the ‘another time, another place’ self-sacrificial theme from that classic British film (directed by David Lean) for a cynical, joke-laden take on soulless self-aggrandizement and emotional damage in status-hungry America. They cut into enough nerves to generate controversy (reviews split between raves and rebukes), plaudits (10 Oscar nominations with 5 wins) and—where it counted in the non-reel world—bang for bucks: the $3,000,000 investment tagged #8 in the States, grossing $18,600,000, with another $6,000,000 internationally. 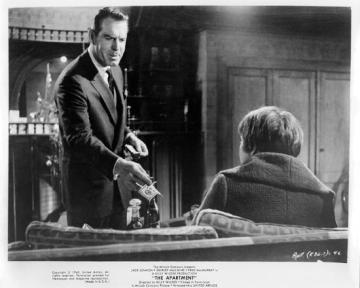 Though the satire is biting, there are more caustic winces than revelatory chuckles; it works better as a drama: Wilder himself said “I don’t regard The Apartment as a comedy. It’s a slice of life that seemed very naturalistic.” Lemmon, 34, basically nailed down the template he’d use—at least for comedy—from there on out. He’s good, but he’s more enjoyable in the underrated Good Neighbor Sam and then later in The Odd Couple. Of his 25-year-old co-star, co-scripter Diamond stated “There are any number of actresses in Hollywood who can be sexy or funny or sad, but we knew of only one who could be all three simultaneously—Shirley MacLaine.”  She is quite good here, yet we venture she was even better in a somewhat similar role two years later on Two For The Seesaw. MacMurray, 51, at the time had just signed with Disney (The Shaggy Dog, followed by six more Walt comedies) and was starting 12 years on TV in My Three Sons. His cold bastard here gave him pause (many fans were outraged), but he’s only a surprise if you don’t recall his excellent turns as a jerk in 1954s The Caine Mutiny, and further back, for Wilder, in the 1944 classic Double Indemnity. When MacMurray balked, saying “They’ll never forgive me”, Wilder told him “Everything is possible if you’ve just got a certain amount of charm.” * 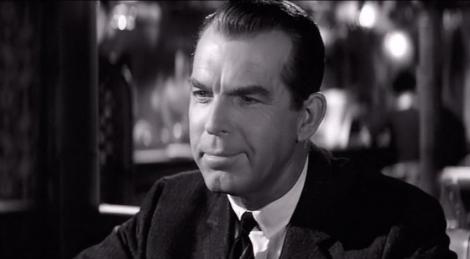 Adolph Deutsch received sole screen credit for the immediately catchy score. The very popular “Theme from The Apartment” was actually a pre-existing piece, originally called “Jealous Lover”. It had been done in 1949 by British composer Charles Williams for the comedy This Romantic Age, co-starring a future 60s icon, Petula Clark. Later in timing to fit the film, Ferrante & Teicher released their cover recording, which reached #10 on the Billboard Hot 100. 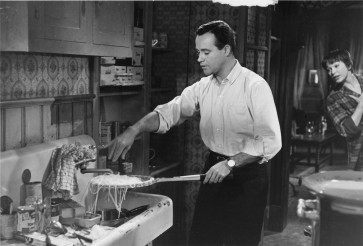 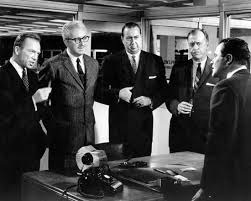 * Yes— to most of the acting, the (face it, pilfered) score, the cleverly arranged and photographed art direction of the office building, but—charm? Uh, short supply.  No—to spending two hours with a group mostly composed of unethical cruds. Comedy is a…yes…funny thing, so is sentiment, and those elemental emotions touch or turn-off all of us in different ways, at different times, for different reasons. You like light blue, I favor dark green. Who’s right? If you love The Apartment, you’ve got the edge on me (this time), and, seriously, Good for You. From my lofty perch, I’m sure you’ll get over (as in, instantly) this half-hearted reaction to a film so many consider sacrosanct. You will manage.  Jack, Fred, Billy, Ray, Edie and the others will live on as long as movies still have currents available to play them through. The Curious Case of Ms.MacLaine apparently has another fifty lifetimes to plumb. Down in the spear-carrying bleachers, I’ll have to make do until mine has dropped its last sand grain; yet, as the hourglass empties it is possible to somehow “shut up and deal” without renting The Apartment again. 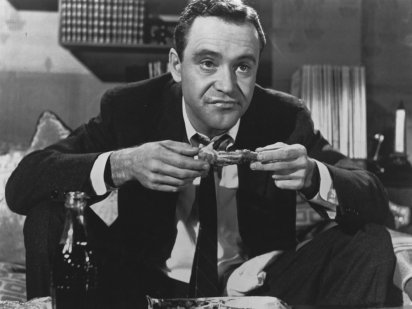 ** Nope, Oscar. We’ll allow Wilder/Diamond their script win, as the others in that category—Story & Screenplay Written Directly for the Screen–were not that hot, but Picture should have gone to the un-nominated Spartacus, Direction and Art Direction to Psycho, and Editing to the ignored The Magnificent Seven.  Generally, I’m a fan of Wilder, saluting Five Graves To Cairo, Double Indemnity, The Lost Weekend, Foreign Affair, Sunset Boulevard, Sabrina, The Seven Year Itch, Love In The Afternoon, Witness For The Prosecution, Some Like It Hot. But Irma La Douce and Kiss Me Stupid can frankly crawl off and croak. The Apartment is much better than those two, yet it still doesn’t measure up to those others. As for “influence”, yes, The Apartment can claim a share, but freedom-bursting 1960 also beheld prostitutes as heroines in big hits BUtterfield 8, Never On Sunday and The World Of Suzie Wong, had religion boxed about its tin ears in Elmer Gantry and Inherit The Wind, and hosted such bracing whacks at the wall of normality as La Dolce Vita and Peeping Tom.  OK, OK, I’m shutting up: you deal, already. 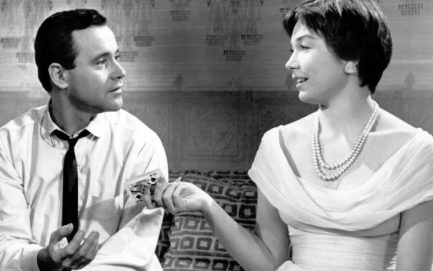 2 thoughts on “The Apartment”