42nd STREET wasn’t the first movie musical—1929s The Broadway Melody, the second Oscar winner for Best Picture, holds that place—but this 1933 put-on-a-show extravaganza holds Granddaddy position for archetype, and is cited by many as their favorite in the genre. The $439,000 production (expensive for the day) was nominated for Best Picture and for Sound, and tagged spot #9 of the year’s earners, a gross of $4,100,000 roughly equal to $162,700,000 in far-off 2020. Will the New Great(er) Depression bring back “All-Talking, All-Singing-All-Dancing” entertainment spectacles to cheer us up through The Big Want before The Final Ka-Boom or Last Gasp? Nah, but re-watching oldies like this can ease the unease for an hour and a half. Aside from the crazypants dancing, they give you some time-tested tootsie wisecracks to put away for future zaps, morsels such as “It must have been hard on your mother, not having any children.”

1933, and things aren’t looking up for anyone (maybe Hitler), and that includes desperate Broadway director ‘Julian Marsh’ (Warner Baxter), who has everything on the line, including his waning health, to see that “Pretty Lady” becomes a smash. Lead actress ‘Dorothy Brock’ (Bebe Daniels) is unhappily married to the blowhard moneybags backing the show (Guy Kibbee) and cheating on him with ‘Pat Denning’ (George Brent), vaudevillian and ‘kept-man’. Sweet, naive chorus girl novice ‘Peggy Sawyer’ (Ruby Keeler) just hopes to make it through the grueling rehearsals, alongside more seasoned ‘cookie’s like ‘Annie “Anytime Annie” Lowell’ (Ginger Rogers).

Keeler, 23, is appealing in her debut, tapping away with precision, and Rogers at 21 breaks through with the sparkle that would shortly see her top-billed. Baxter has to bark and shout so much that you can’t warm to his driven, selfish character, but the well-written movie is still involving; cute lines and game players vying with now-obvious plot devices until the wowzer wrap-up, when the show itself goes on. That is launched by the immortal commandment to Keeler “All right, now I’m through, but you keep your feet on the ground and your head on those shoulders of yours and go out, and Sawyer, you’re going out a youngster but you’ve got to come back a star!” *

The director Lloyd Bacon turns reins over to choreographer Busby Berkeley, who in quick succession maneuvers his troupers to deliver “Shuffle Off To Buffalo”, “Young And Healthy” and the eternally irresistible title number “42nd Street”.  Geometry, mass coordination, sex spice, humor and drama meld into a general dazzle of energy, imagination, abandon, cheer and hope. 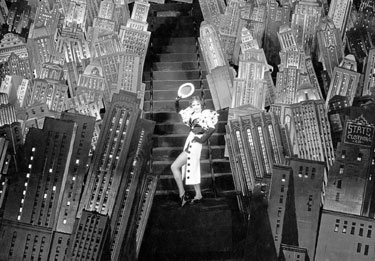 * The saucy pre-Code script by Rian James and James Seymour has a goodly share of risque insinuation going on, and it’s commendable for grounding the people patter and personnel predicaments in the reality of their time and professional milieu: the hard knocks economy, chorus girls fainting from exhaustion and lack of food, degrees of amorality, drunkenness and bitterness rescued by pure drive, talent and spirit (Ahoy, FDR!). Even so, it was toned down from the source novel written a year earlier by Bradford Ropes, which, aside from being music-free and unhappy, also had the characters later played in the movie by Baxter and Powell as having a thing for each other rather than those dancing dames. Gee–guys working in musicals on Broadway? Is such a thing even possible? 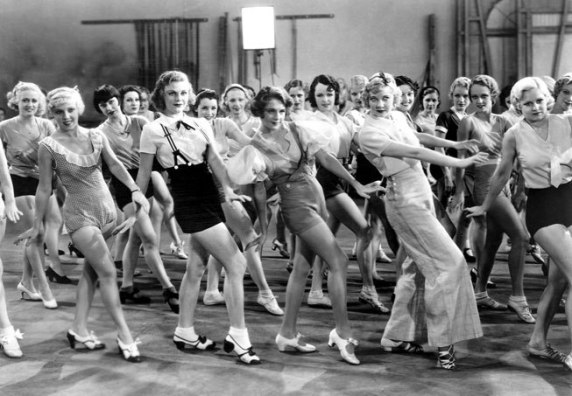