TWO FOR THE SEESAW —–in 1962, director Robert Wise followed West Side Story with another New York-set piece, this intimate relationship drama originally written by William Gibson (The Miracle Worker) as a 1958 play, which starred Henry Fonda and Anne Bancroft and ran for 750 performances on Broadway.  Isobel Lennart (Love Me Or Leave Me, The Sundowners) wrote the screenplay, with Robert Mitchum and Shirley MacLaine stepping in as the couple trying to navigate between hope and hurt in the alternating pond and quicksand of commitment. *

A fugitive from a failed marriage and Nebraska (so he has at least one victory), adrift and unemployed lawyer ‘Jerry Ryan’ (Mitchum) has moved to New York City to start over. At a lively hipster party he meets ‘Gittel Mosca’ (MacLaine), a younger, free-spirited dancer. Tentative fumbling becomes sustained flirting, the fling becomes a Thing. He gets a job, they move in together, but their merry-go-round wobbles as much as it whirls, attraction and affection bump into clashing styles and unresolved histories.

Iconoclasts to their marrow, it was literally a star-crossed situation for the mutually smitten actors, and their chemistry is obvious: it’s a movie with a high make-out quotient that they didn’t need to fake (they did plenty of rehearsing).  Mitchum, 44, made a strong showing that year, playing ballsy Gen. Norman Cota in The Longest Day and the bestial ‘Max Cady’ of Cape Fear, while MacLaine, 27, was still basking from applause from The Children’s Hour and The Apartment, which this movie is invariably (and rather lazily) compared to and dissed.

They’re the whole show, the other cast members have so little screen time they barely register. And they’re both really good, better than the incisive but overly wordy script. Mitchum felt miscast (Wise thought so, too), and had turned the part down twice, before his ken to work with Shirley swayed him. He drew a lot of flak from snippy reviewers—“Intellectual snobs”, Bob nailed them— but it’s fun watching him parry and feint with MacLaine, who’s at least as good in this bittersweet affair as she was in the biting comedy of The Apartment. The $3,000,000 effort was not a big success, grossing just $4,600,000, 53rd place for the year. 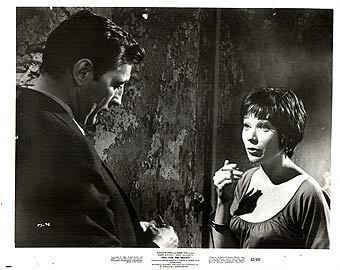 * Other relationship-centered pictures in ’62 included David And Lisa, All Fall Down, Jules And Jim, Period Of Adjustment, Phaedra, Sweet Bird Of Youth, Five Finger Exercise, The L-Shaped Room, Lolita, Days Of Wine And Roses, Long Days Journey Into Night, Light In The Piazza and Tender Is The Night.

** First the project was intended for Paul Newman and Elizabeth Taylor, but I don’t think that would have panned out as well had they done it. Newman took The Hustler, which was a smart move, and Liz was unable to escape from Cleopatra, which was more up her alley than a beatnickian type like Gittel. Q: did Shirley know the real Cleo in one of her past lives?  Life then tagging Art, the Bob & Shirl off-screen tango continued for years. 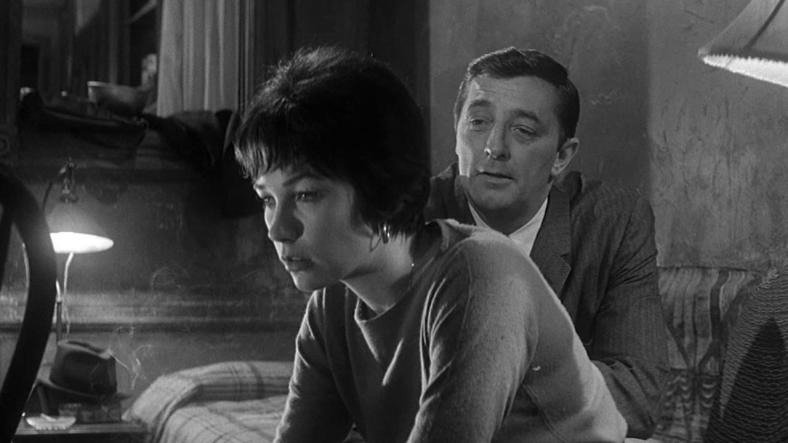