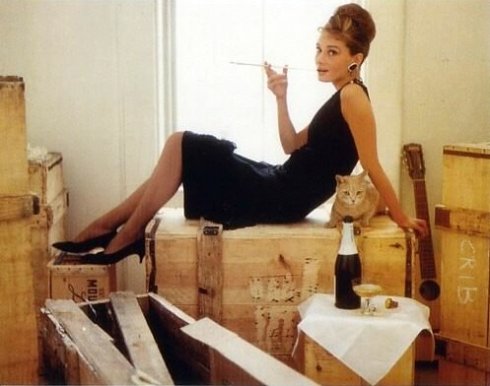 BREAKFAST AT TIFFANY’S —–(I guess here is where I lose a percentage of good will)—-Ah, how perfectly droll, so airy, frothy and chic.  How patently phony, how typical of penthouse-poolside ‘sophisticates’ to ladle it out to all of us trogs living in the woods between Malibu and the Hudson. Beyond a few ingredients, I’ve never been able to choke down this goop. Can’t dump all the blame on director Blake Edwards or screenwriter George Axelrod, considering that the source of their material was the insufferable imp Truman Capote.

‘Holly Golightly’, the character played by Audrey Hepburn, is often described by admirers of this cornerstone baloney as a lovable knockabout ‘kook’. What Holly really is, is a well-coiffed hooker, just the kind of PTP scamp we’d all simply die to be trashed by.  Give me the honesty of ‘Suzie Wong‘, any day.  Hepburn’s considerable charm gets stretched to the nth here.  It’s not her fault, since she does what’s required, but as written the character is neither believable nor sympathetic. The stuff that’s supposed to funny doesn’t tickle me at all: the famous party scene has all the extras looking like they’re having a great time but again its ‘mad’ whimsy  is so forced it freezes my face. 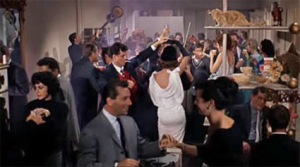 George Peppard, as her smitten fool, is okay. Patricia Neal is stylish and slyly amusing as a career fang-sharpener; she sells her role better than Hepburn, and here the writing works.  Buddy Ebsen tries in an ill-conceived role of a decent-but-dim backwoodsy type out of his bush-league in Manhattan.  Infamously, Mickey Rooney went wildly racial as a Japanese landlord—as bad calls go, this one is pretty hard to fathom.  Edwards was in charge, so I’d say the blame rests with him, the makeup & the material more than Mick. Rooney was hurt by the furor; understandable upset continues to this day.  Martin Balsam is a pro as ever and the great, missed John McGiver has a charmingly underplayed bit as a considerate clerk at Tiffanys.

Fake sheen is all over the screen, but what gives the 1961 movie any hold (and most of its sentimental pull) is Henry Mancini’s music, which is hauntingly beautiful, the peerless “Moon River” at its heart. That sublime capture of wistfulness gives more stature than deserved to this fairy tale.  It won Oscars for Score and Song. I’d never begrudge it for Song, though I do think the tune’s pull tilted the score’s win past the far richer work from Miklos Rozsa on El Cid. 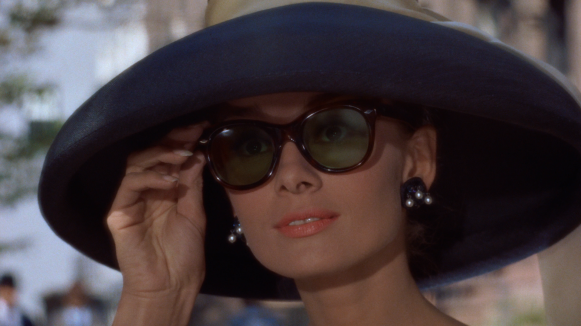