THE LAST WAGON—–Richard Widmark plays ‘Comanche Todd’, on the run for murder, whose chance for redemption comes when he is faced with leading six teenagers and kids, survivors of an Apache massacre, out of the hostile desert.

It’s a tough story, commenting on the prejudices of whites against Indians and the often cruel nature of the young.  Widmark’s character has lived much of his life with Indians, and the killing’s he’s wanted for are his avenging the murder of his family. Likewise, just as the group of young sudden-orphans have to cast their anguished lot with a tormented ‘Indian-lover’, the threatening Apaches are bent on making the whites pay for decimating their families: the un-merry-go-round of grief, prejudice and vengeance fuels the plot.

A creditable production, blessed with beautiful scenery in Arizona’s stunning Oak Creek Canyon and assorted lovely spots around Sedona, captured to a tee by Wilfred M. Cline’s camera. Fine score by Lionel Newman and one humdinger of an explosion near the end.  Good scripting from James Edward Grant and director Delmer Daves, fine acting by all.  George Matthews makes a repulsive heavy as Widmark’s main pursuer, and 24-year old punk Nick Adams nails a thoroughly nasty impression as one of the embittered young folk. Widmark, looking at home in buckskins, is excellent as ever, and his courtroom speech on his family and his ‘crime’ is suitably moving. 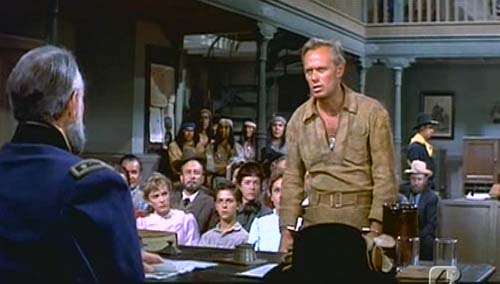 One of oddly underrated director Daves nine good westerns of the 50:the others Broken Arrow, Drum Beat, White Feather (script), Jubal, 3:10 to Yuma, Cowboy, The Badlanders and The Hanging Tree.  Several of these dealt with Native Americans and did so with sympathy, as Daves had spent a good deal of his youth on Navajo and Hopi reservations. 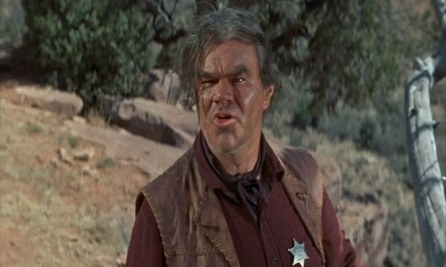