BHOWANI JUNCTION comes as a real find, an intelligent big-scale period drama, under-appreciated in its day and left on the back shelf behind staple critical and popular favorites of the era. Huge productions with international settings (The Ten Commandments, Around The World In 80 Days, War And Peace ) and sprawling American epics (Giant, The Searchers ) dominated screen and press in 1956: mention this expensive, location-shot entry, with two big stars and a lauded director and you’ll draw a blank.

“The only people who face reality are too dumb to duck when they see it coming.”

Too bad, because the majority of its 110 minutes are absorbing, thoughtfully scripted by veterans Sonya Levien and Ivan Moffat, cloaked with atmosphere and detail from the Pakistani locales, lavished with expertly marshaled crowd scenes that always have some grace note to catch your eye in the frame among the thousands of extras. It also rewards with arguably siren Ava Gardner’s best dramatic work.  Looking ravishing at 33, she’s directed by George Cukor, renowned for getting actresses to deliver their best, but not a guy known for outdoorsy affairs with train wrecks, riots, uniforms, sweat, lust and politics—all of which he manages here as deftly as he guided Gardner: it’s quite impressive.  Apparently the sophisticated and nominally fastidious Cukor relished the location challenges in Pakistan (India wanted too much money to shoot there), which included temperatures of 130 degrees and bouts of dysentery.

She’s gifted a full range of emotions to convey as an Anglo-Indian woman, torn between allegiances to England and India, caste and race, family and tradition, as Indian independence from the Crown gets cracking in 1947.  Three men vie for her: no-nonsense British officer Stewart Granger, emotional fellow half-caste sweetheart Bill Travers and Sikh rebel Francis Matthews.  The script tackles race discrimination much more effectively than most from its day (Giant also did it that same year, on home ground Texas), with the added layers of complexity factored in from India’s polyglot makeup and history.

Add Communist scheming, parental distress and attempted rape and you’ve got a novel on your hands, natural as it was taken from a bestseller by India-chronicler John Masters. Filling out the canvas are vivid smaller roles from Lionel Jeffries, Marne Maitland, Freda Jackson and Abraham Sofaer, an unobtrusively effective musical background arranged by Miklos Rozsa (no composed score with singular themes, maybe a studio budget concession) and excellent cinematography from the great Freddie Young.

Granger* is fine, (Cukor wanted Trevor Howard: hard to picture him with Gardner), Matthews quietly effective, but Bill Travers really lays it on overboard, starting in fourth gear and staying there, his performance dates badly. (Small World Footnote:when Travers had served in the British Army, author Masters had been a Major in his outfit:refer to this sites take on Born Free for neat tidbits on the redoubtable Mr.Travers).  But the acting chops in this saga firmly belong to Ava, her Oscar nom for Mogambo notwithstanding, I think this forgotten film is her best showcase and she does it beautifully—compare her work here to how Liz Taylor or Susan Hayward would have screeched or panted it up.

*The genial Granger and atomic Ava got along well or weller, depending on who’s memoirs you read–meantime his wife, Jean Simmons (who could have played Gardner’s part) and Gardner’s husband, Frank Sinatra ,were back in Hollywood making Guys And Dolls. Gardner & Granger reteamed immediately after on The Little Hut. 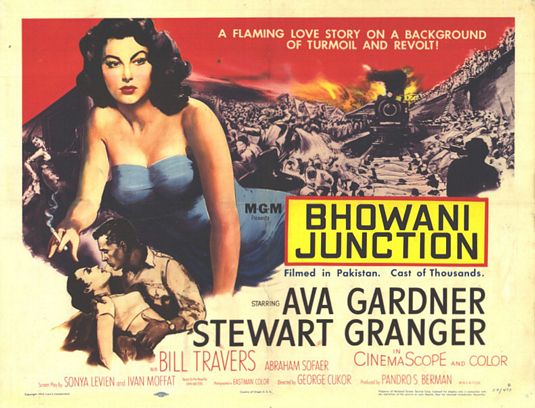