BREEZY —here’s where I lose my militant feminist fans (no doubt legion).  Those who’ve had the good fortune or bad luck to experience the rejuvenating rhapsody or deflating misery of falling in love when there is a considerable age-factor difference will appreciate this little drama, a sensitive and welcome early directorial effort from Clint Eastwood and a perfect vehicle for the world-weary projection of star William Holden. 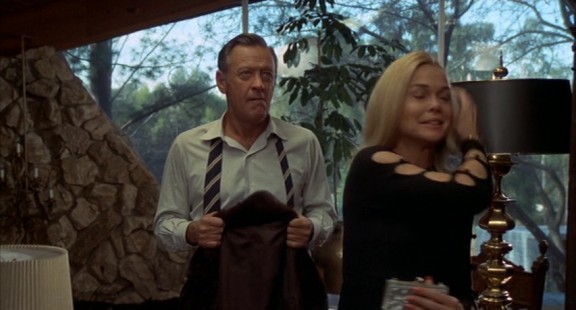 From 1973, ancient history now, it was somewhat of a period piece already, set as it is during the waning days of the flower-child era, but the universal dilemmas of the story-line and the performers appeal transcend the quaintly dated trappings.  Holden plays a 50-year-old man, divorced and disillusioned, who chances upon a life-loving hippie, glove-fit by the fresh, vibrantly sensual 19-year-old Kay Lenz.  The life-worn gent gets progressively more involved with the naive sprite, even as he tries, sometimes harshly, to keep that from happening.

Written by Jo Heims, the plot machinations are superficial and the supporting cast are for the most part a wash, but a slew of Los Angeles environs are used for location work to nice effect, including Topanga and Laurel canyons and Lookout Mountain; Eastwood getting cameraman Frank Stanley to capture the sunny SoCal ambiance adroitly. It’s almost a valentine to what some of L.A. felt like back before it was a complete snarl.

Newcomer Kay is a most convincing argument for a May-December romance and Holden could capture more with a tired release of breath than most actors could with somersaults of hammed anguish.

Eastwood’s third go as a director (the first without himself as star) was done on a pocket-sized budget that came in under a whisper of $750,000. After being poorly marketed by Universal, returns were $5,300,000, a quick-passing 52nd place for the year.  Reviews dismissed (how could the venomous likes of Judith Crist endure this?) but it’s fared better in recent reevaluations. Worked for me. Fittingly enough,  reports assert that Clint became temporarily ‘fond’ of Lenz.  Gee, wonder why?  First-stone casters, look to your own pile of rocks.