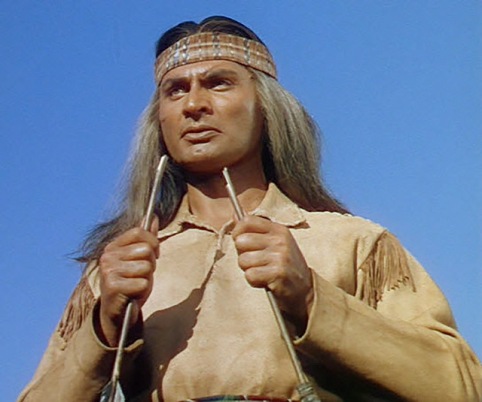 BROKEN ARROW, the 7th most popular picture of 1950, was the most successful of the years stellar crop of westerns, and is often cited, along with 1952’s High Noon, as one of the first “liberal” twists to the durable genre’s tail, in this instance offering a sympathetic view of Native Americans, here the Apaches under their great chief Cochise. James Stewart stars as Tom Jeffords, who befriends him Cochise, played in a star-making turn by 30-year-old Jeff Chandler. 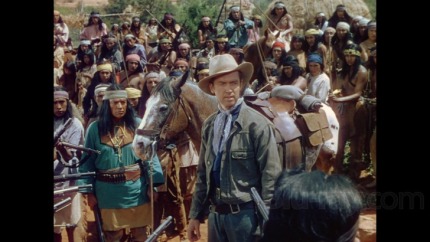 Arizona Territory, the early 1870s. Mutually murderous conflict between white settlers and Apaches tribes have lasted more than a decade. Taking a calculated risk, veteran scout Tom Jeffords (1832-1914) tries to forge peace between the bitter sides, earning the trust of the feared Cochise (1805-1874) and coincidentally falling in love with young maiden ‘Sonseeahray’ (Debra Paget). Fraternity is fragile, what with vengeful Americans (led by Will Geer as ‘Ben Slade’) on one end and breakaway warrior Geronimo (done with vigorous enmity by Jay Silverheels) ready to rampage on the other.

“You know what I am thinking? Maybe someday you will kill me, or I will kill you. But we will not spit on each other.” 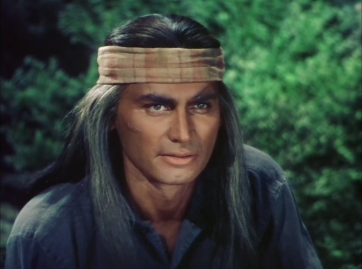 Directed by Delmer Daves, who was particularly adept at handling action with pictorial style, the screenplay by Albert Maltz was riffed off the 558 pages of Elliott Arnold’s novel “Blood Brother”, putting fictional elements (like the interracial romance) into the factual outline. Stewart’s fine, adding this to his better, tougher western that year, Winchester ’73 (he also scored two comedies, Harvey and The Jackpot). Of course, following movie tradition—and unspoken racial taboos underlining them—the doe-eyed beauty has to perish, ironically softballing the script’s otherwise commendable acceptance of Native Americans. Some may find it a tad unsettling that the gorgeous Debra Paget was only 15 and Jimmy was 41. Imposing in stature and voice, Jeff Chandler makes a vivid impression as Cochise, quietly conveying power, intelligence and authority. We’ll leave the p.c. casting critics to their ceaseless sputtering. While Jeff & Debra more than make up for their makeup with their sincere acting, Daves and producer Julius Blaustein did employ 240 Apaches from the Fort Apache Indian Reservation. *

Visually, it’s beautiful, with Ernest Palmer’s painterly cinematography of stunning Arizona locations, mostly around Sedona. Chandler earned an Oscar nomination as Supporting Actor, as did Palmer for his camerawork. A third Academy Award nomination went to the script, but since writer Albert Maltz was blacklisted, Michael Blankfort served as a front, so a movie dealing with long-standing intolerance of one sort was visited by another then in vogue. Supporting actor Geer was blacklisted a year later. 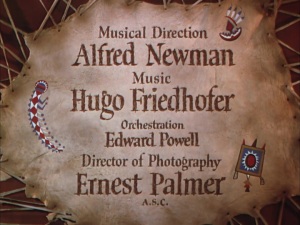 * Chandler twice reprised Cochise, bookending his story in 1952’s prequel The Battle At Apache Pass, then passing the torch in 1954 to Rock Hudson as Taza, Son of Cochise. The intense actor also had a strong role in another top-quality 1950 western, the unsung epic Two Flags West, that time as a Kiowa-hating cavalry commander.

A TV series of Broken Arrow, with John Lupton as Jeffords and Michael Ansara as Cochise ran in 1956-58.

Though Broken Arrow gets most credit, it was not the first movie to show dawning sympathy for Native Americans, and in 1950 there was another fine western that took on the issue, the neglected Devil’s Doorway. 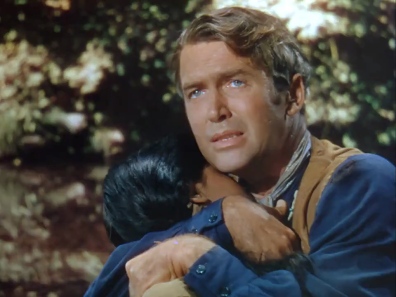