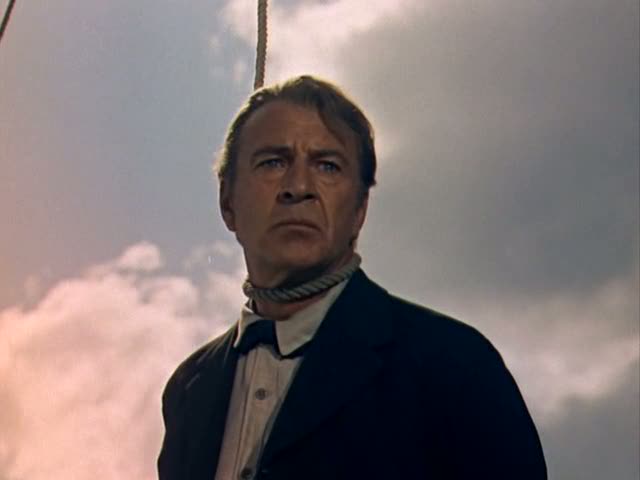 THE HANGING TREE —–thoughtful, offbeat, very well-acted and pictorially handsome, this 1959 western for adults was the last of nine impressive contributions to the genre from director Delmer Daves. It was the next-to-last for a fella who was for all intents and purposes an American Institution, an essential stalwart of the saddle, Gary Cooper. *

Montana,1873.  ‘Joe Frail’ (Cooper) follows the ‘Miner’s Trail’, town to town, as the ramshackle instant communities spring up in search of gold. He’s a doctor, likes to gamble and is good with a gun. Ducking a tortured past, alternately affable and demanding, he earns allies and enemies. The former include an immigrant Swiss woman (Maria Schell) injured after a robbery, and a troubled young man (Ben Piazza), who acts as indentured servant after Frail saves him from vigilante justice. Those bridling under Doc Frails rules include lewd lout ‘Frenchy’ (Karl Malden) and a demented, drunken faith healer (George C. Scott).

To begin with, along with the casting, the writing is superior, with all the actors allowed believable layers of frustrated desire and self-conflicting behavior. Instead of the usual frontier cut-outs, they feel more like real people. From a short story by Dorothy M. Johnson, the screenplay was crafted by Wendell Mayes and Halstead Welles.**

Daves (assisted by Malden, see below) does a top notch job  directing, with fine work from cinematographer Ted McCord  capturing the isolated, beautiful mountain locations, making the settings as much a character as the humans. Filmed during summer of ’58, on the East side of the Cascades in Washington, in pristine woods and streams of the Oak Creek Wildlife Area near Yakima, Goose Prairie and Nile (an old mining town). Makes you want to go hiking.  Max Steiner did the score, which keeps fairly well to the background, but the opening credits and powerful finale are bracketed by the irresistible title tune, written by Mack David & Jerry Livingston and sung by the great Marty Robbins. The song drew an Academy Award nomination. ***

Along with 1952’s High Noon and Friendly Persuasion from 1956, this is the best post-WW2 work from Cooper, and he’s lucky to have a character with assorted shades to convey, from graceful and tender to canny and merciless—as his daughter (Maria) said in an interview, “you don’t usually expect a Cooper character to pump several bullets in a body and kick it over a cliff!”

Mention a movie with Gary Cooper and a stunning, blue-eyed foreigner named ‘Maria’ and most fans would immediately think of For Whom The Bell Tolls and Ingrid Bergman, but the marvelous Maria Schell is ever bit as compelling, real and alluring as the more famous Swedish star.  A year after her striking U.S. debut in The Brothers Karamazov, Schell is again perfectly natural, warm, intelligent and quietly captivating. 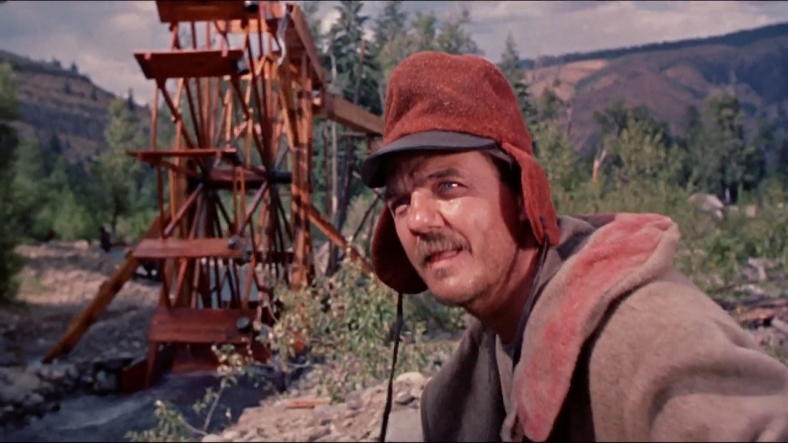 Malden brays and blusters conveying ethical mendacity and physical menace: a throughly disreputable, believably sketched troublemaker. Broadway actor Piazza, 25, is billed as “introduced”, although two years earlier he’d headlined a small Canadian-made drama, A Dangerous Age. He’s okay, the weaker link in the cast, a tad on the bland side.  Not bland is Scott, 31, in his first film (though not given introductory billing). He only has a few quick scenes as the maniac Bible-thumper, but he definitely stakes out his turf (his other 1959 appearance, supporting James Stewart in Anatomy Of A Murder, gave him more to do and he netted an Oscar nomination: he didn’t have to turn that down, as it was copped for Hugh Griffith in Ben-Hur).

Looking expansive thanks to the setting, direction and photography, it was modestly budgeted at $1,350,000. Earned $6,290,000, coming in 43rd for the year. Reviews at the time were polite: it’s finally getting its due as an excellent picture. 107 minutes, with Karl Swenson, Virginia Gregg, John Dierkes and King Donovan.

* Starting with the 1925 silent The Vanishing American, Gary Cooper graced three dozen westerns. A few months before this one, he’d shown up in Anthony Mann’s harsh Man Of The West, which many critics extol—I don’t buy it. Coop’s final mount-up, They Came To Cordura, came out six months after this, but it was muddled and grim, and lost money. The intriguing, surprising, ultimately reaffirming The Hanging Tree makes for a more fitting last roundup. 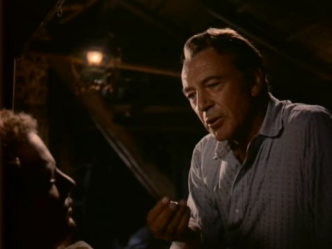 Delmer Daves fell ill from ulcers while making this; he worked for six weeks and then Karl Malden (who had recently done a good job directing Time Limit) stepped in and helped out for a month. Starting with Broken Arrow in 1950, Daves rewarded fans with Return Of The Texan, Drum Beat, Jubal, The Last Wagon, 3:10 To Yuma, Cowboy and The Badlanders.

** Among her 17 books and 52 short stories, Dorothy M. Johnson (1905-1984) added to the western canon “The Man Who Shot Liberty Valance” and “A Man Called Horse”. She said “I think the people who headed West were a different kind of people. Somebody said in a long poem that the cowards never started and the weaklings fell by the way. That doesn’t mean that everyone who went West was noble, brave, courageous, and admirable because some of them were utter skunks, but they were strong, and I like strong people.”

*** “The Hanging Tree” ceded an Oscar to “High Hopes”, from A Hole In The Head. It was one western tune that Frankie Laine didn’t nab, although he, not Robbins, performed it for the telecast. One of Robbins many beloved hits, it holds a secure rep among the singers fans and the dwindling posse who cherish classic cowboy songs (as opposed to the modern fake-urban-redneck-pickup-truck-‘cowboy’-music pap, which ain’t worth the tobacco you could spit at it). 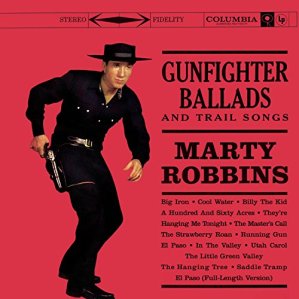 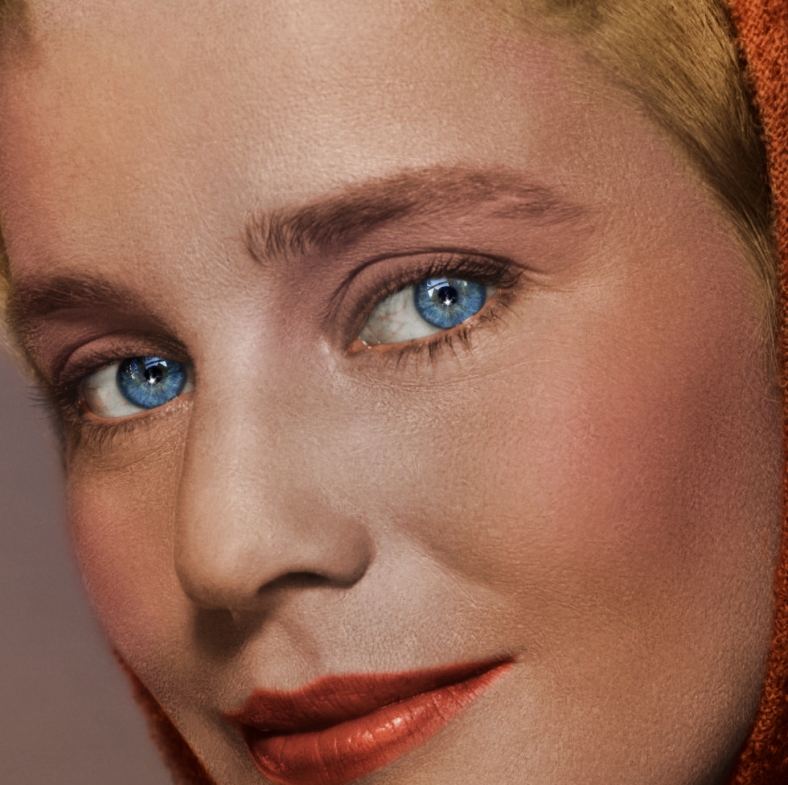 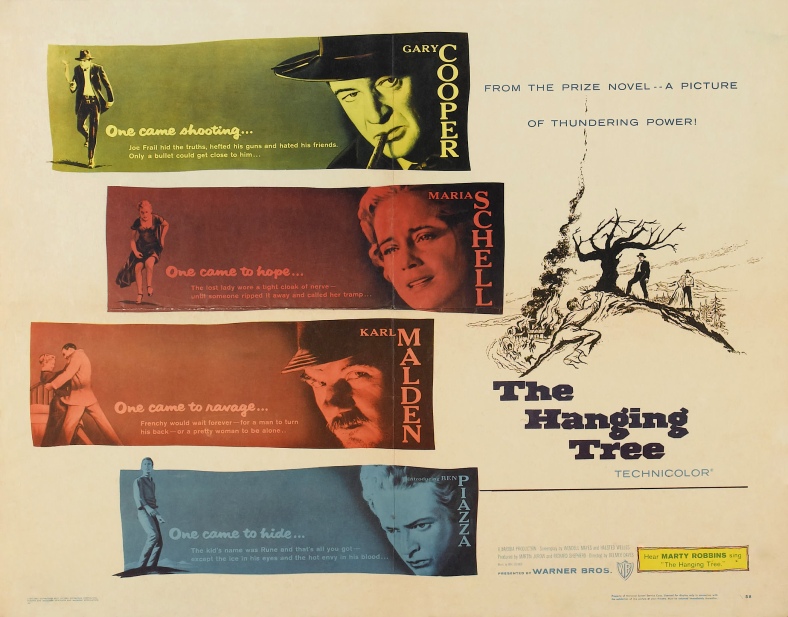