THUNDER IN THE SUN —-boy, talk about one that needs to be seen—and for sure heard--to be believed, this flagrantly bad western would ordinarily find a lowly berth in this site’s listing of duds beginning with T, since not only is it bad, it’s pretty much forgotten. Yet it’s so terrible we decided to honor it with its own special placement, kind of like a wanted poster.

Flush from her long-sought Oscar win (1958 Best Actress for I Want To Live!), Susan Hayward started off a whole slew of duds that basically lasted for the rest of her career, and the inaugural project was this 1959 cowpie, co-starring her childhood neighbor and friend Jeff Chandler, by that time no stranger to the Bar-B-queue. Perhaps writer-director Russell Rouse talked a good game (he had recently done an okay oater with Glenn Ford, The Fastest Gun Alive) and maybe the novelty of the story appealed, but the results are only good for horselaffs.

The story is another wagon train affair, but this time the catch/hitch/laff riot is that the hardy pilgrims are a party of Basque immigrants from the French side of the Pyrenees, seeking to plant their beloved grape vines in 1850 California (is this how The Grape-vine got there?—consult your Pedia of Choice and impress someone at the next wine guzzle). 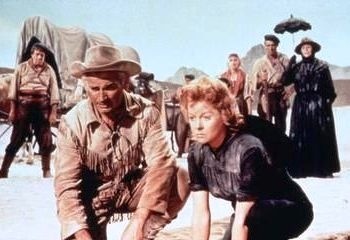 Rowdy scout Chandler reluctantly takes the lusty, colorfully attired foreigners through assorted blends of location work (near Lone Pine and Mt. Whitney in CA) and obvious, badly integrated studio sets and rear projection that won’t fool a chipmunk, let alone the hapless Indians who finally get to attack the Basques in a lengthy, kill-heavy climatic action scene truly astounding in its nonsense.

As the Basques come from mountains, and here they fight the Native Americans (as badly portrayed as ever) in mountains, they get to demonstrate their peculiar, hell, amazing boulder-leaping technique (Holy Leaping Tapas, Scoutman !), presumably perfected from chasing sheep—if you think I’m being snide—watch the movie) while screaming the “irrintzi”–a traditional whooping/ululating call (not for fighting, incidentally) that sounds –in the movie at least–like something between a yodeler on acid and a pig that found a balloon of helium. I suppose kids in the audience loved this back in 1959 matinees. Basques were not amused. * 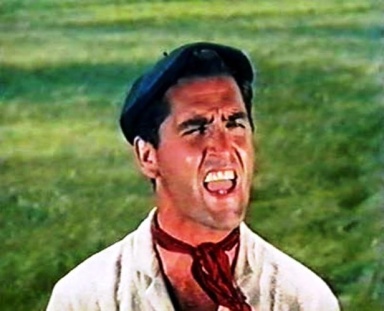 Of course, the heavy-breathing, shoulder-swinging Hayward (accent-laden, as ‘Gabrielle Dauphin’) and the jaw-flexing Chandler get together, but first her dull-as-a-wine-expert husband has to get conveniently perforated.

The ads trumpeting “THE SUN NEVER BLAZED ON A MORE SAVAGE SAGA!”, it managed to make $4,710,000, arriving at spot #48 for the year. With Jacques Bergerac (an actual Basque Basque: he married Ginger Rogers, then Dorothy Malone, before leaving showbiz to work for Revlon), Blanche Yurka, Carl Esmond, Fortunio Bonanova, Veda Ann Borg and June Wilkinson. Fittingly horrid title tune—complete with those bizarre yells— will start the laughter from minute-1, and end it all 80 later.

* People who write about movies are supposed to pretend like they know where everything came from, have read every famous book and know when to use sexy French movie-words when you can’t think how else to get out of a paragraph. I confess to knowing little about Basque culture other than they are perhaps Europe’s oldest, can identify the rough area of their geographic hinterland and understand that their first wave of US immigrants hit at the time of the Gold Rush. There may be as many as 100,000 people in the States who can claim full or partial Basque heritage, with Boise, Idaho hosting the largest community. Reading comments about this doofy movie from their ticked brethren indicates, not surprisingly, that writer-director Rouse played utter havoc with their customs. He’d later bless Bad Movie Valhalla with The Oscar. 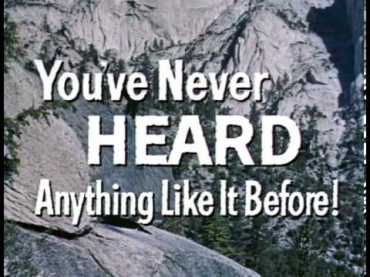