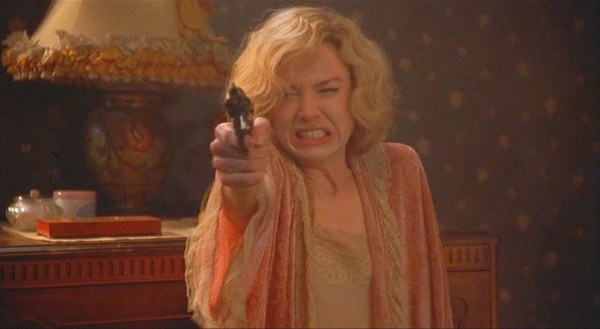 The whole movie in one expression

CHICAGO begs to get a one-sentence review: “Remember all those great songs from Chicago?”   In 2002 this adaptation of the landmark Broadway musical had critics swooning (most, not all), made a pile of money and swept up all manner of awards including 13 Oscar nominations, winning six of those. I don’t think it deserved any of the wins, so you may rightly guess I’m in the minority on this flick. I thought it was okay, good actually, when I saw it back then, but it’s telling that not only did it evaporate from my Emotion Zone as soon as I left the theater, it took this died-in-wool film buff fifteen years before I could feel like sitting through it again. Getting the flu was the key; it may have helped break the fever.

Bimbo needs to meet a dingo

Sums up the attitude the film-makers have for the audience

The used & abused sap played by Reilly and one actually innocent girl—who gets the rope—are the only characters who are not sordid, selfish or cynical. The actors are fine, but the aftertaste is like a sardine & vinegar milkshake. Individually, the songs are cleverly constructed, but they’re singularly unappetizing, all brazenly clawing SHOWSTOPPER! at you, blending into one long, senses-battering assault that, despite the body arching poses and gam flashing, comes off with the subtlety and grace of the buffalo stampede in How The West Was Won. The idiotic millisecond editing cheats on the ‘dancing’, cut in a way that tries to trick an attention-span-detrained audience into thinking they’re witnessing something other than empty neo-Brectian conceit in the ‘themes’ that supposedly under-gird all the frantic and suggestive wiggling, thrusting and pouts. Sheer directorial indulgence is unleashed courtesy of Rob Marshall (later to inflict the much worse Nine). It’s a smug con job. Count me out.

Pose-a-thon: who needs a choreographer when you have a film editor on crack?

All that Oscar jazz. Nominated for Actress (Zellweger), Supporting Actor (Reilly), Supporting Actress (Queen Latifah), Director, Screenplay, Cinematography, Song (“I Move On”). Winning for Best Picture, Supporting Actress (Zeta-Jones), Art Direction, Costume Design, Film Editing (insulting) and Sound. That this tricked-up, self-adoring nonsense beat out Gangs Of New York, The Pianist and The Lord Of The Rings: The Two Towers is another pie-in-the-kisser for Academy respectability.  Filmed for $45,000,000, it brought in $307,000,000 worldwide. Abandon hope, all ye who enter here…

Just look at me foolin’ ya, suckerrrss…