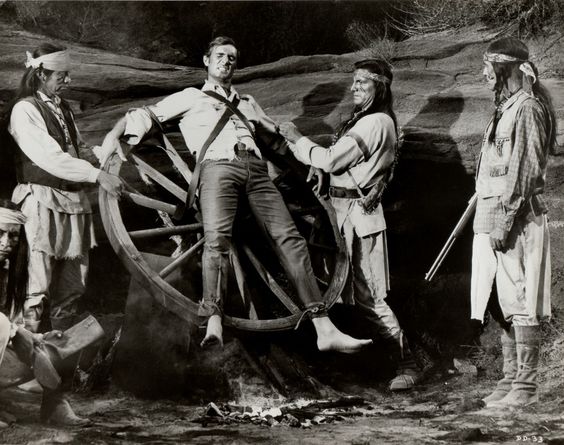 DUEL AT DIABLO —–grim 1966 western with nary a light moment in 103 merciless  minutes. Lots of action, fine cinematography and a nifty music score help an offbeat cast battle the downer tone, some sloppy editing and an unwieldy script.

Looking to avenge his wife’s murder, a scout (James Garner, sans niceness) first has to contend with a rookie cavalry unit (led by Bill Travers) being ambushed and decimated by the Apaches, who also want the baby belonging to a shamed but defiant white woman (Bibi Andersson) who crossed the unforgivable color line, which greatly displeases her Indian-hating husband (Dennis Weaver). A fancy-outfitted ex-vet (Sidney Poitier) lends his experience and gun skills.

The script’s assorted irons—revenge, racism and rampage— are not juggled well enough into the fire by director Ralph Nelson: it plays better as a stylized effort in the vein of the spaghetti westerns emerging at the time. The dead seriousness lacks the goofy aspect of the European shootups and logic loopholes undercut its pose as meaningful. I like it, but aside from the visual look, score and some of the action, we’ll concede it’s shakily constructed. 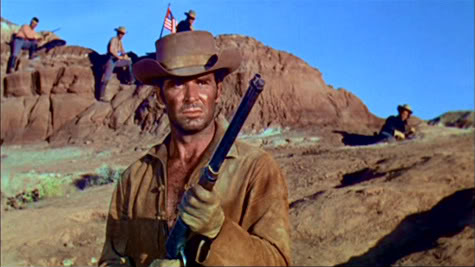 “My horse is dead and you’re back – shoulda been the other way around.”

The cast do well enough, though Travers and Andersson are definitely out of their element. For his first feature film in six years, Weaver sheds his folksy ‘Chester’ from nine seasons limping around Gunsmoke to play a bastard (and pays a literally tortuous price).  Garner is glum (not a lot to be happy about here). A refreshing aspect to Poitier’s character is that nothing is made of his color. Shallow as written but showy to see, it earns points as another notch forward in moving mainstream minds toward tolerance. An African-American buddy of mine cited Poitier’s role here as one that had a considerable hero-effect (movie-version) for him as a child. * 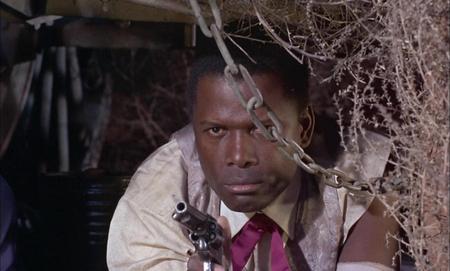 Charles F. Wheeler was behind the lens in his first feature credit as cinematographer,  capturing some dramatic sun-baked scenery on locations in Utah at White Cliffs, Glen Canyon, Paria, Kanab Canyon and the Kaibab National Forest.  Ralph Nelson’s directing of the plentiful, bruising action scenes shows flair, aided by some energetic stuntmen and cooperative horses, though the sound crew got their wires—or rather, noises—crossed with numerous instances of gunshot sounds varying from scene-to-scene, the same weapon somehow capable of three different types of ka-pow. A to-heck-with-it goof, or deliberate choice for varying the audio effect? **

As to sound, the best single aspect is the untraditional scoring from noted jazz trumpeter/composer/arranger Neal Hefti. His instrumentation doesn’t conjure typical western soundtrack embroidery. Perhaps he was influenced by the Ennio Morricone scores making their way into our noggins, as much as his heritage with hipper modern urban styling, but it somehow fits the cactus & cavalry groove here, and the arresting main theme has a mournful undertone that complements its catchy momentum.

* Are the following the only instances before this where a Black man was given hero cred in a western?  In 1960, Woody Strode, memorable in Ford’s Sergeant Rutledge, and Jester Hairston, fighting to the last in The Alamo. In 1964, future action icon Jim Brown nailed down his end of rugged Rio Conchos. Strode (who’d also been the guy who tossed the Winchester to The Man Who Shot Liberty Valance) would have a deserved break in the big hit western that same year as Duel At Diablo, sharing in the applause as one of The Professionals.

** Ralph Nelson helped Sidney Poitier win his Oscar for Lilies Of The Field and later one for Cliff Robertson as Charly. He scored with Requiem For A Heavyweight and Father Goose and flopped badly with Once A Thief, Counterpoint, Soldier Blue and Embryo. Long before he found energy outlet in film, he was a teen terror, with Judge Ferdinand Pecora deeming him “potentially the most juvenile criminal in New York”. The one-time punk became a flight instructor in WW2, directed hundreds of plays and live TV episodes, and received a honorary Doctor of Humane Letters from Columbia University.

One thought on “Duel At Diablo”