IN ENEMY COUNTRY was churned out by Universal in 1968, making use of several of their contract players in a WW2 espionage saga tailored to the 107 minutes that would make a good fit for TV after it first served as the bottom half of double bills. It looks more like an elaborate made-for-TV product; after a promising first act, the script gets  progressively unlikely, ending not with a whopper but a whimper.

As the Germans threaten war in 1939, a cold-blooded French intelligence operative (Tony Franciosa) orders his one-time flame (Anjanette Comer), working “under-covers”, to get info out of a German officer (Paul Hubschmid) by marrying and following him to Germany.  Segue to 1943, game on, and Franciosa parachutes behind the lines to penetrate the Reich’s ‘super-torpedo’ factory on the Baltic. Turns out the French gal and her hubbyfuhrer are posted near the site.  Hitch: though still operating, she’s now in actual love with the nice-guy Nazi—they even have Himmler for lunch.  Other allied agents posing as laborers help Tony wreak havoc. A Rottweiler bites him. Fistfights.  Explosions. Loyalties are questioned, situations and resolutions get more absurd as it goes along. *

Direction is by the undistinguished Harry Keller. Script by the estimable Edward Anhalt, off a story from Sy Bartlett is not one of the better efforts from either. Franciosa, in his blondish period (Fathom) is, as usual, unsympathetic and slick, and Guy Stockwell is thrown away in a crappy supporting part. After a fine role in The War Lord, the studio wasted his talent, and this one must have felt like a flat-out insult. Despite sporting 60s hairstyles (beguiling but wrong), the beautiful Comer does what she can, and has a few good moments. Hubschmid was also known for a while as Paul Christian: buffs recognize that name from The Beast From 20,000 Fathoms, which, frankly, had a more believable plot. 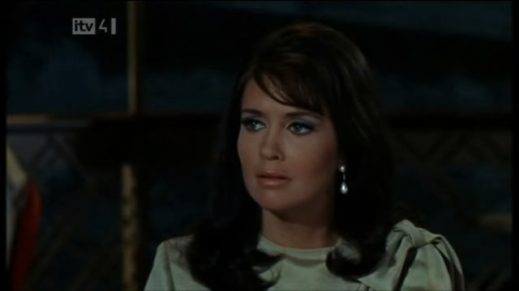 * Other lame Universal WW2 grinders from the same period include Raid On Rommel, Counterpoint, The Longest Hundred Miles, Escape to Mindanao, and one that was halfway decent, Tobruk. Besides gazing at Anjanette, best thing about In Enemy Country was the poster art.