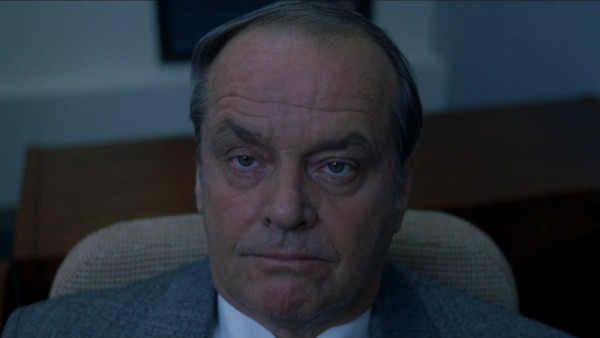 ABOUT SCHMIDT ——“Relatively soon, I will die. Maybe in 20 years, maybe tomorrow, it doesn’t matter. Once I am dead and everyone who knew me dies too, it will be as though I never existed. What difference has my life made to anyone. None that I can think of. None at all.”   Jack Nicholson won big by playing it small in this razor keen comedy-drama from 2002, earning critical raves and the last of his 12 Academy Award nominations. Playing it large, literally full-bodied, uninhibited co-star Kathy Bates earned her third nomination. The $30,000,000 production clicked with crowds as the 41st most successful film of the year, making $105,835,000, giving writer-director Alexander Payne his first hit. *

Upon retirement from a career as an insurance actuary in Omaha (think about that life sentence), politely walking-dead nonentity ‘Warren Schmidt’ (Nicholson) is further relegated to past-due when his studiously frumpy wife dies (while vacuuming). Unaware that he’s doing so, in two ways he seeks a measure of meaning for a life that appears to have next-to-none. He embarks on a road trip across Nebraska to Denver, to try and forestall the marriage of his put-off & off-putting daughter ‘Jeannie’ (Hope Davis, aces again) to ‘Randall’, a genial dumbbell (Dermot Mulroney, dead-on). That entails meeting—and surviving—the new in-laws. He also begins a foster child correspondence with ‘Ndugu’, a little boy in Tanzania, and spills his pent-up anxieties in rambling letters to the uncomprehending village youth. With scant sense of self, Schmidt tries to talk sense to his daughter, make sense of her new clan and find a sensible reason to keep breathing.

“Well Ndugu, I’ll close now. You probably can’t wait to run and cash this check and get yourself something to eat.”

Payne (and co-writer Jim Taylor) took only the title and the main character’s name from Louis Begley’s 1996 novel and crafted 124 minutes of insightful adult-minded tragi-comedy. Biting yet poignant, it has wickedly accurate fun with certain middle class, middle America types without condescending to them. Begley, who wrote two Schmidt sequels, thought the ultra-loose adaptation “a gem of original filmmaking” and that “my most important themes were treated with great intelligence and sensitivity.” 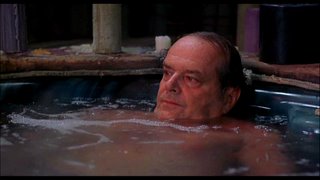 “The other night I had a dream and it was very real. Your mother was there and you were there and your aunt Estelle. And there was a… well, it wasn’t really a spaceship, it was more like a blimp or an orb of some kind. And then a bunch of weird creatures came out and started trying to take you away, and you wanna know what? They all looked like Randall. Do you understand?”

Instead of the fiery, profane Jack from so many of his great portraits, Nicholson submerges that trademark volcanic energy into a classic embodiment of a ‘small’ man living the proverbial life of “quiet desperation”. He mutes flamboyance into discreet, acute discomfort and ever-so-slowly dawning recognition of the crushing weight of Nothingness.  Squished and portly, he’s painfully credible, fully pitiable, and funny as hell. His physical bit wrestling with a waterbed (who invented those torture rafts?) is a condensed Master Class in been-there slapstick. After a measured slow-burn of trial-by-inanity and mini-defeats, empathetic writer-director Payne grants the actor, character and audience a wonderful final scene that ought to pry honest emotion from anyone who’s not Dick Cheney.

Thanks to his daughter’s sincere but appalling bad taste, Schmidt’s new tribe includes the high, wild and free ‘Roberta’, played like an imperious Earth Mother freight train by Kathy Bates. She’s riotous, over-the-top but true, so close to New Age ‘reality’ you can smell the chakras: you’ll never approach an innocent-looking hot tub in the same casual way again.

“The main reason both of my marriages failed was sexual. I’m an extremely sexual person, I can’t help it, it just how I’m wired, you know, even when I was a little girl. I had my first orgasm when I was 6 in ballet class. Anyway, the point is that I have been always very easily aroused and very orgasmic, Jeannie and I have a lot in common that way. Clifford and Larry, they were nice guys, but they just could not keep up with me. Anyway, I don’t want to betray Jeannie’s confidence, but let me just assure you that whatever problems those two kids may run into along the way, they will always be able to count on what happens between the sheets to keep them together. More soup?” 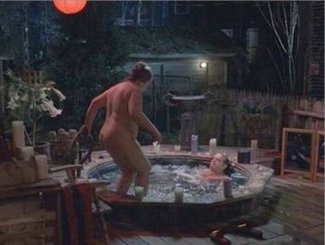 A beautifully understated score by Rolfe Kent underlines the recognizable absurdities with droll cheer and the quiet losses with plaintive gentleness: his music is smart enough not to take you where a typically intrusive “expected” soundtrack would for this type of ‘ordinary people’ movie. Like the writing and direction, Kent’s handicraft recognizes the difference between ‘heartwarming’ and heartburn. Plus, whoever saw fit to have Bachman-Turner Overdrive rock the wedding party knows their people. 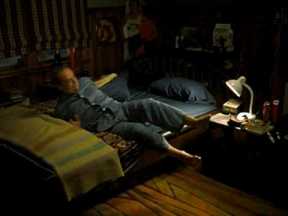 * Jack’s Oscar lineup: Best Actor in One Flew Over The Cuckoos Nest and As Good As It Gets. Supporting Actor in Terms Of Endearment. Nominated as Actor: Five Easy Pieces, The Last Detail, Chinatown, Prizzi’s Honor, Ironweed, About Schmidt. Up for Supporting Actor: Easy Rider, Reds, A Few Good Men.  Kathy Bates took Best Actress for Misery and was nominated in the supporting category for Primary Colors and About Schmidt. Alexander Payne’s previous films, Citizen Ruth and Election, were critical faves but box-office duds. Next came Sideways, The Descendants and Nebraska.

** ‘Ndugu’ —which is not a name, but a Swahili term for brother—-was found by one of the film’s publicists. Abdallah Mtulu, 6 at the time, now presumably 24 (no trace on the Internet), came from Lugongole, Tanzania.  Benefits from using his image didn’t go to him or his family directly, but were spread among group projects by Plan International.  Though his family gave permission to use his likeness, they received not a dime of the one hundred and six million dollars the movie generated. The village has a per capita income of $1 a day.  Tom Beaudoin, in his book “Consuming Faith: Integrating Who We Are With What We Buy” says of this example: “Our economy in miniature: a product entertaining and pleasurable, whose production depended on the disregard for the dignity of its secret star.”

Worth mentioning: the IMDB offers that the production crew created a lifetime Endowed Scholarship for Abdallah, through the real Childreach Organization.  Hopefully that was indeed so and has worked out. 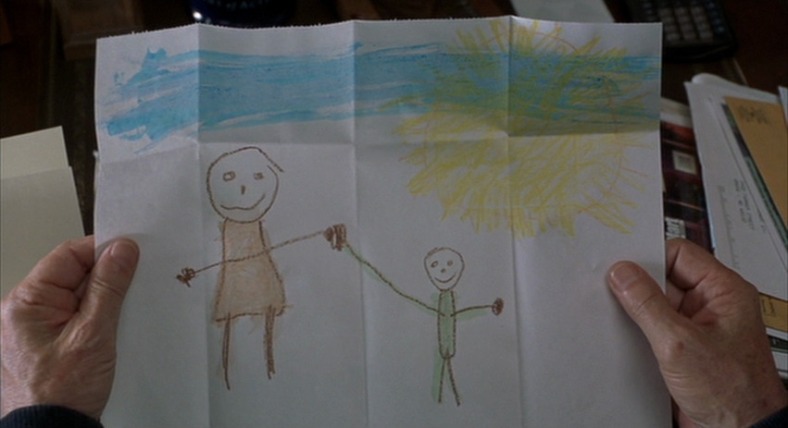