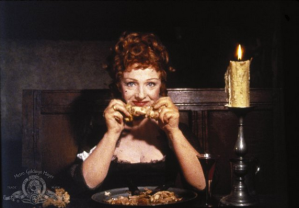 TOM JONES, “of whom the opinion of all was that he was born to be hanged”, flirted and frolicked across the tumescent cinema-scape of 1963, delighting crowds with its bawdy menu of England’s landed gentry and their lusty appetites, circa the 1740s. The period romp was an about-face for director Tony Richardson, whose previous films had all been dramas, sluggish black & white downers about unhappy people in drab surroundings.

With John Osborne adapting the 968 pages (346,747 words) of Henry Fielding’s 1749 satire into a breathable 128-minutes of screen-time, Richardson and his sparkling troupe of actors were a seductive advance party for the brash British Invasion. Tom’s foolery scooped the #4 spot at the boxoffice in a year overstuffed with comedies. * 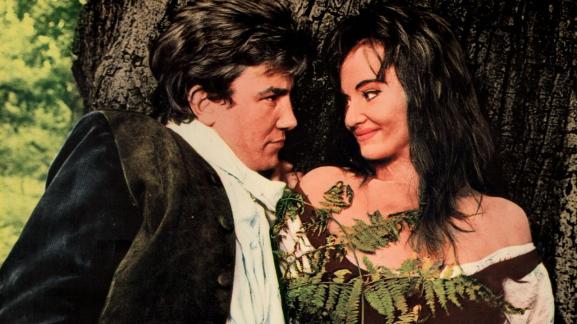 “It’s a good night to be abroad and looking for game.”

Albert Finney, 26, turned down Lawrence Of Arabia and drew his big break as Tom, a rambunctious but basically decent lad who found it really, really hard to say “no”. Understandable, with a 23-year old Susannah York (if a peach was a person) traipsing through the shire as ‘Sophie’, maid of his brave heart.  Yet, our lad Tom is sensible enough to grasp one does not live by tea alone, otherwise why did they invent crumpets?  If ever/if ever/a wench/ there was, it might be the ever-willing ‘Molly Seagrim’ (Diane Cilento).  What ho, eventually you have to sup–and it might as well be with ‘Mrs.Waters’ (Joyce Redman—she lived to be a ripe 96) who knows her way around chicken bones and oysters.  Slaked, will our hero yet be a match for the wiles of ‘Lady Bellaston’ (Joan Greenwood)?

Meantime, the sneaky ‘Blifil’ (David Warner, 21 in his debut) must be dealt with.  Battling on the sidelines are gusty buffoon ‘Squire Western’ (Hugh Griffith) and his exasperated sister (Edith Evans). “Rouse yourself from this pastoral torpor, sir!”  “Madam, I despise your politics as much as I do a fart.”

While their scenes are among the highlights, Evans loathed Griffith, who was roaring drunk most of the shoot. His legendary antics, which transform riotously on film, in real time left other cast members less than amused. The spunky 74-year old Edith whacked him with her parasol, and when Griffith took the wrapping off his riding crop and actually lashed Finney with it, the bloodied lead, in full character mode as Tom, retorted with “I can’t abide to be whipped, Squire,” then punched him in the face. They both walked off the set, swearing they’d never work together again. The funny scene where the Squire turns his horse in circles went awry, as Hugh was so plastered he pulled too hard on the reins. The horse reared up and toppled backwards onto him. So relaxed by spirits, the Welsh madman rolled with the fall, blithely saving himself from crushing injury.

The once-novel filming techniques (playing with camera speeds, quick cuts, breaking the 4th wall, the zany score) don’t hold up well, the bracing deer hunt sequence is hard to watch with its jarring brutality and bloodshed, and the last quarter of the film runs out of gas, even with the purring tones of Joan Greenwood’s Tom-devouring sophisticate. The exemplary cast are the enduring reason to watch; they keep it going when the directorial cheek loses impetus.

Initial Brit reviews were not kind, Richardson and studio execs thought they had a $1,100,000 disaster. But it caught on in the colonies, and the Oscars knighted it with wins for Best Picture, Director, Screenplay and Music Score. Nominations went up for Finney as Best Actor, the Art Direction, Griffith as Supporting Actor and an unduplicated trio of Supporting Actresses: Cilento, Evans and Redman. **

“If you take my heart by Surprise, the rest of my body has the right to follow.” Naturally, studios jumped on the bawd-bandwagon, but subsequent mining of similar ore yielded tossoff costume jewelry like The Amorous Adventures Of Moll Flanders, Joseph Andrews and The Wicked Lady. One too many mores into the breeches…

* Richardson’s pre-Tom bummers were Look Back In Anger, The Entertainer, Sanctuary, A Taste Of Honey and The Loneliness Of The Long Distance Runner: bring me some low-cut blouses, a cutlass and fresh ale for my mount!  Though 1963 collapsed in agonized disbelief with the murder of JFK, it may not be too far off to speculate that Kennedy’s disarming wit and earnest hope had added to the zeitgeist that saw at least forty comedies released that year. At any rate, the emergence of Bond & The Beatles dovetailed with Tom Jones and All Things Britain, and sexy material had cross-channel company with one of the years other big comedy hits, Irma La Douce.

** Oscar-kvetch time in the clubhouse. Tom Jones is still a tickle (Griffith & Evans are priceless), but….America America and director Elia Kazan should have won. The un-nominated The Great Escape, It’s A Mad, Mad, Mad, Mad World and From Russia With Love were deserving (I’ll take ‘MMMW’ in a flash–or “dubble-ya“). The real gripe this randy squire will never cede is John Addison’s sillypants score getting the nod over Alfred Newman’s career masterpiece How The West Was Won. W-T-F !!?  Plus they left Elmer Bernstein’s The Great Escape and John Barry’s From Russia With Love off the roster. Years later, Addison (who may well have been a fine gent) blew a bomb-sized music hole into A Bridge Too Far. This kind of note-unworthy injustice has me staggering about like Hugh Griffith. Alas, the keyboard’s horizons reveal no Susannah York within haystack grasp. Life is cruel….

“Happy the man and happy he alone,
He who can call today his own,
He who secure within can say:
Tomorrow do thy worst!
For I have lived today.“