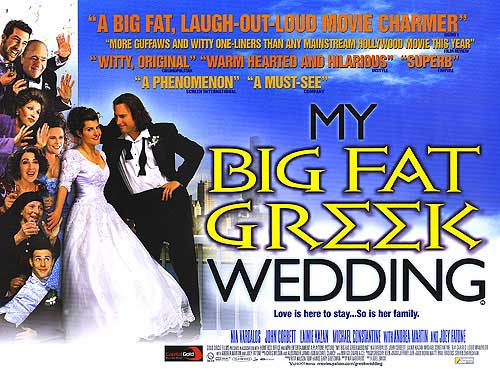 MY BIG FAT GREEK WEDDING is warm and winning from its first to 95th minute. Filled with smiles, chuckles and guffaws, its screenplay sufficiently flush with sparkle to earn an Oscar nomination, the simple rom-com charmer rode an audience ripple that became a surprise tidal wave, grossing $368,744,000 worldwide. In 2002, this little sleeper turned into the most successful romantic comedy of all time. By teasing tradition with affection, it doesn’t bang you over the head with a jar of olives, making for a sweet little wisdom lesson on tolerance.*

“I had to go to Greek school, where I learned valuable lessons such as, “If Nick has one goat and Maria has nine, how soon will they marry?” 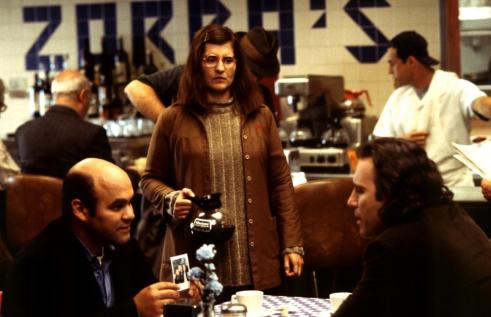 ‘Toula Portakalos’ is 30 and unmarried. Her parents (Michael Constantine and Lainie Kazan) are stunned when she decides to wed WASPy ‘Ian Miller’ (John Corbett). His decidedly more staid parents (Brice Gray and Fiona Reid) are in for some culture immersion from the swarm of Toula’s relatives, including the less-than-shy ‘Aunt Voula’ (Andrea Martin). 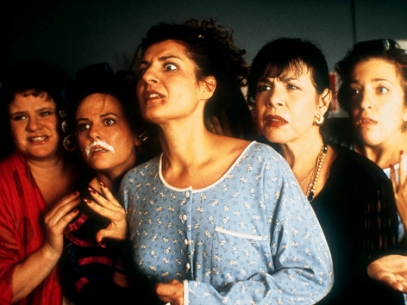 “Let me tell you something, Toula. The man is the head, but the woman is the neck. And she can turn the head any way she want.”

Basing her screenplay off a one-woman show she’d previously developed, its offbeat and most engaging leading lady, former Second City comedienne Nia Vardalos, took the story from her own experiences: “In terms of my real life and my real marriage, everything in the movie actually happened either to me, or a cousin…”I basically took every Greek wedding I’ve ever been to, including mine, and on a scale of one to 10, I turned it up to an 11.”

Studio suits wanted her to change the ethnicity from Greek to Hispanic, assuming a greater box-office potential, and to star Marisa Tomei, a known quantity and a sure bet for looks and likability.  Nia stuck to her guns, friends Rita Wilson (fellow Greek gal) and Tom Hanks produced, letting veteran TV director Joel Zwick help Vardalos craft it for  $5,000,000.

“So, what happens is my dad and uncles, they fight over who gets to eat the lamb brain. And then my aunt Voula forks the eyeball and chases me around with it, try to get me to eat it, ’cause it’s gonna make me smart. So, you have two cousins, I have 27 first cousins. Just 27 first cousins alone! And my whole family is big and loud. And everybody is in each other’s lives and business. All the time! Like, you never just have a minute alone, just to think, ‘Cause we’re always together, just eating, eating, eating! The only other people we know are Greeks, ’cause Greeks marry Greeks to breed more Greeks, to be loud breeding Greek eaters.”

There was a bit of demographic tweaking, as Vardalos’ husband, Ian Gomez (who has a part in the film) isn’t a WASP and Vardalos was ten years past 30, but neither of these factoid blips matter in the slightest. She’s perfect, and the wonderful Andrea Martin should have been given a Supporting Actress nomination (for the record, she’s Armenian).

“Ian, if you’re gonna be in this family, I get you some earplugs because the Portokalos women, if they’re not nagging someone… THEY DIE!”

With Louis Mandylor, Gia Carides, Gerry Mendicino, Joey Fatone, Bess Meisler and a roomful of Vardalos relatives. Lot’s of fun. Followed in 2016 by a sequel.

* Cost v. collection, one of the most profitable movies ever made, a return of 6,150%. A blissed Nia Vardalos walked away with $35,000,000.  For some daft reason, I avoided this exceedingly happy movie for a good fifteen years before giving it a prove-it chance. I guess I suffered from bash-me-twice resistance, thinking it was going to be another harangue force-feeding from the vat marked Lovable-Generic-Ethnics-Show-Tight-Ass-Anglos-How-To-Smile  (dictated on my yacht en route to polo).   Never too old to slap yourself.