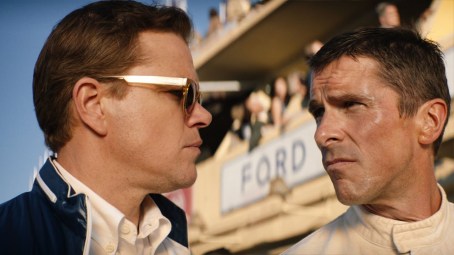 FORD v FERRARI, like its man & machine heroes, has some uncorrected design flaws that can tickle buyer’s remorse after you park it, but the drive home is rush enough to justify leaving complaints in the sneer garage and shifting the adrenaline joystick into release mode. In English: if you like car race movies, you’ll get your money’s worth, and if they’re not high on your bucket list, this period piece epic from 2019 is as sleek a vehicle as you could pick for a test ride. *

Henry Ford II is personally insulted when his company’s 1963 offer to buy Italian car maker Ferrari is snubbed. He orders company VP Lee Iacocca and underlings to build a Ford fierce enough to slay the legendary Ferrari on the field of battle: in France at the ’24 Hours of Le Mans’. Retired racing icon & vehicle designer Carroll Shelby (Matt Damon) gets picked to head the team: he enlists notoriously thin-skinned British driver/mechanic Ken Miles (Christian Bale), who will ultimately drive the rocket-fast but problem-plagued GT40 MK II in the big 1966 finish. Hot dogs and chips v pasta and nice suits.

Directed by James Mangold, written by Jez Butterworth, his brother John-Henry Butterworth, and Jason Keller, the David v Goliath setup (if you can accept a corporate titan like Ford in slingshot pose) proceeds along the expected ‘beats’ demanded by such come-from-behind tales, and does so with precision and dispatch, even at a hefty running time of 152 minutes. There’s neat period detail (albeit with a few flubs), expert cinematography, editing and sound. A hot finishing touch to Marco Beltrami’s scoring job is including a great instrumental version of “Polk Salad Annie” frenzied up by the guitar of James Burton; it’ll re-rev your engine. ** 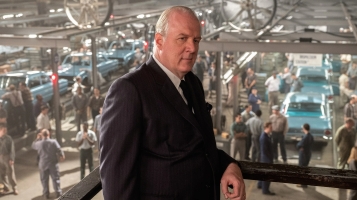 The “human interest” angle of the screenplay is lackluster and predictable, particularly with the weakly written role of Miles wife, rather done colorlessly by Caitríona Balfe. But the charismatic performances from likable Damon, intense Bale and formidable Tracy Letts (as a no-shit-taken Ford) are a decisive winning hand, and the racing sequences are superbly done. As Lee Iacocca, Jon Bernthal is refreshingly allowed to play a character closer to civilized for a change.

Taking its time, the flashy if dramatically obvious and unsurprising story drew an Oscar nomination as Best Picture, and another for Sound Mixing, and lapped the Academy’s trophies in the categories for Film Editing and Sound Editing. The technical applause certainly makes sense, but Best Picture? Whatever…

With Josh Lucas (a good actor, though as written and played the interpretation of Ford exec Leo Beebe doesn’t jibe with the record, turning a very accomplished man into a cardboard jerk),  Ray McKinnon (as engineer Phil Remington, done as standard loyal supporter, laid-back country style), Noah Jupe (okay as Miles son Peter), Remo Girone (haughtiness time, as Enzo Ferrari, the boo-hiss Euro-snob figure who must be taken down by Yank-Brit knowhow. Have wrench, will strike.  Brass balls spin 200mph.

* The flag has dropped—“official” car race movies are a different breed of bronc buster than their more numerous outlaw brethren of rogue dudes skipping rules, law and logic to zoom  maniacally fast & spurious outside the track world and the pesky confines of legality, morality and gravity. On the professionally crazy side, trophy-scoping auto jockeys have been screeching curves on screen since the silent era. Die hard couch champions may opt for Grand Prix as the Big Daddy Roth of racing flicks (it puts this backseat driver into a 3-hour nap), while others can crank their shafts and down a half dozen beers over Winning, Le Mans, The Last American Hero, Speed Racer, Rush, 1, Driven, The Crowd Roars, The Racers, The Devil’s Hairpin, To Please A Lady, Red Line 7000, Greased Lightning, Heart Like A Wheel, Stroker Ace, Days Of Thunder….

** Oldsters paying attention will nitpick a 1963 Ford boardroom discussion using stills of Sean Connery’s 007 and his Aston-Martin from Goldfinger (1964) and Thunderball (1965). Pour another Jack Daniels and surrender to the modern era’s Chronology Gap.

One thought on “Ford v Ferrari”