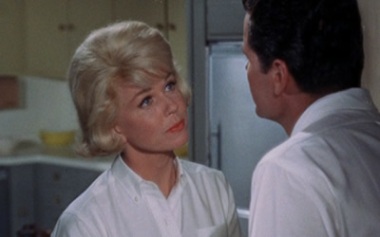 THE THRILL OF IT ALL put Doris Day and James Garner together in a bright 1963 comedy that audiences lapped up: the $15,700,000 gross placed 14th for the year. ’63 was banner for Garner, with two more big hits, The Great Escape and Move Over, Darling (also with Day) and a moderate success in The Wheeler Dealers. As to this enjoyable fluff, Garner in his autobio said it was “better than it should have been…because of Doris.”

Suburban housewife ‘Beverly Boyer’ (DeeDee, 40 and fine) is happily married to equally pleased ‘Gerald’ (equally pleasing JG, 34), busy with his obstetrician practice in Manhattan, while Bev handles their two tots (Kym Karath and Brian Nash) and finds further domestic contentment canning catsup in the basement. Income soars but stability stalls when an innocent comment Bev makes at a dinner party results in her selected to represent “Happy Soap” in TV commercials. hHer fresh and honest delivery turns her into a star, but Dr.Gerald feels the pride pinch from role reversals. Will an emergency delivery in a traffic-jammed limousine in Act 3 solve their suds-induced rift?

It wears a bit in the second half, with the husband concocting a byzantine make-her-jealous scheme, but otherwise most of Carl Reiner’s script is amusing and Reiner himself does a series of funny cameos as characters in the TV series that is sponsored by Happy Soap’s popular commercials. Norman Jewison directs efficiently, Garner’s light touch was well-proven by five years on Maverick and 1962’s Boys Night Out, and the supporting cast is stacked with familiar faces. But as Jim’s comment makes plain, the leading lady makes it work. Could she be an cuter (and that is a compliment, so drop the p.c. fork and deal)? Doris did ‘flustered’ better than anyone, and never slouched by playing plucky as daffy.