From 1959, rock your hepness to 89 priceless minutes of sleazy camp, a teen angel’s rumble of drag races, jive talk, make-out sessions, catfights, tight sweaters, and….nuns.  Front-and-center (accent centering on her front) is the Queen of Slutdom herself, the iconic Mamie Van Doren, posing like a a model for Mt. Rushwhore, trading insults and innuendoes with a cast from Nirvanistan.

“I got tired of you cats with the fast cars and the slow heads. You give me a pain in the ears.”

Sixteen-year-old hellcat ‘Silver Morgan’ (Van Doren, 27), blamed for the cliff-plummet death of a local creep, is sent to a rehab facility run by nuns, where her snarl-pout is stuck putting up with their rules, and with a clutch of punkettes. When ‘Fred’, the area’s head jerk, conspires to ship her kid sis ‘Mary Lee’ to Tijuana as a white slave, Silver brings her game on and faces down the drag-racing crowd. A punk named Fred—and he’s played by Mel Torme? Imperiled sis is Elinor Donahue, aka ‘Betty Anderson’, freed at 21 from Father Knows Best, here equipped with blonde hair and tight sweater to pass as Mamie’s kin. As to La Van Doren, considering how wantonly she thrusts her superstructure forward, she may as well be Mammaries Von Doorknobs, but her style of playacting is perfect for the tawdry-meets-moronic material. Tossed in for kicks is teen idol Paul Anka,18, in his first “dramatic” role. You have to put up with him warbling “Ave Maria”, but he does belt out his classic “Lonely Boy”. *

Mel as Fred, a real down hood

Directed—if that’s the word—by Charles F. Haas, typed into a script by Robert Smith. Haas steered Van Doren through four of her pictures, grinder musings a long remove from his studies at Harvard under poet T.S. Eliot. This laugh-riddled drive-in bait was made for $457,000, lowball enough to make canny producer Albert Zugsmith happy when it grossed $1,100,000. Zugsmith brought Mamie, Mel and Paul back for The Private Lives Of Adam and Eve, whose Biblical connections are tenuous, dubious and other things ending in ‘ous’.

“Big deal. King Groovy comes to Dungeonsville to make with a song for po’ little ol’ us. What do you want me to do, kiss your foot?”

“You’re in queersville, man. You’ve flipped.”  “Okay if I use the Alexander Graham?”   “Go bingle your bongle!”

* A gravity-defying 90 in ’21, Mamie Van Doren’s list of films includes immortal morsels High School Confidential, Untamed Youth, Born Reckless, The Big Operator, The Beat Generation, Sex Kittens Go To College and Vice Raid. Unlike fellow Monroe imitator Jayne Mansfield, Van Doren actually had some talent, but with that bod coming at you, like, who cared? 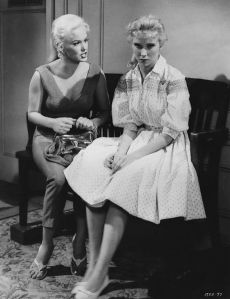 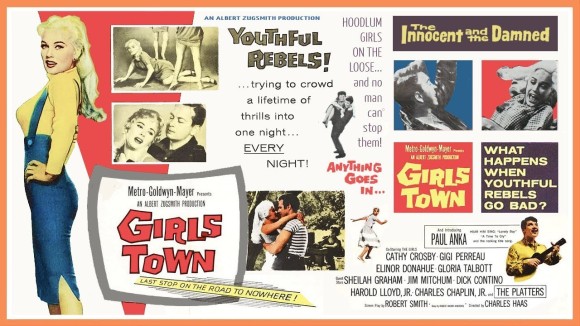