WHEN THE DALTONS RODE, lively Old West hoo-haw from 1940, is a fictional take on the Dalton Brothers, bank & train robbers of the early 1890s. Harold Shumate’s pretty good script is based off a book of the same title published 9 years earlier, co-written by Emmett Dalton, the only survivor of the gang. The book was a fanciful account, and anyway, facts didn’t get in the way of the year’s crop of westerns, a colorful posse of fibs taking history for a ride. *

“What’s gonna happen to Ma, and the farm?” 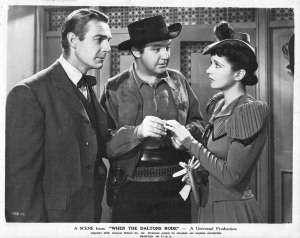 Wronged by a crooked land development company, the Dalton brothers embark on a “we’ll show ’em” spree of bank & train looting, and don’t seem overly concerned that a number of people get shot along the way. Close-knit brothers Grat, Bob, Ben & Emmett are played with gusto by Brian Donlevy, Broderick Crawford, Stuart Erwin and Frank Albertson. Their straight-arrow lawyer pal is Randolph Scott, the femme interest is Kay Francis, and Andy Devine provides his patented squeaks as the comic relief. Scott and Crawford come off best in the bunch.

Sainted “Ma” givin’ the boys a piece of her mind

Directed with verve by George Marshall, loading up 81 minutes with family dynamics and plenty of action, a mix of rear-projection and rowdy stuntwork (pity the horses in this one). Marshall was on a roll, having just delivered a classic western in Destry Rides Again as well as popular comedies You Can’t Cheat An Honest Man and The Ghost Breakers. The script uses the handy land grab revenge motif that worked for Jesse James, and drags in the ‘hearty Irish mother’ for good measure.

Placing 99th for the year, with a gross of $2,000,000, it made room in the cast for George Bancroft, Mary Gordon and Edgar Buchanan.

* The westerns of 19 & 40 offered fun but were light on accuracy: Sante Fe Trail, The Westerner, The Return Of Frank James, Virginia City, Brigham Young, Dark Command and Kit Carson all took real-life characters and raised heck with the record. Other entertaining entries that were not hamstrung by any factual basis whatsoever included Northwest Mounted Police and Arizona.

Mining Yankee greenbacks from the Dalton’s depredations worked for Randolph Scott’s financial portfolio: he used the outlaws in various capacities on Badman’s Territory, Return Of The Bad Men and The Doolins Of Oklahoma. “If they move, re-shoot ’em”.

As for script source Emmett Dalton (1871-1937), he did survive the famous Coffeyville Raid that polished off a couple of his siblings, managing to emerge from the gunsmoke with twenty-three wounds. After spending 14 years in prison, he wised up, moved to California, wrote a couple books, did some acting and dabbled in real estate. It’s not known if he went surfing. 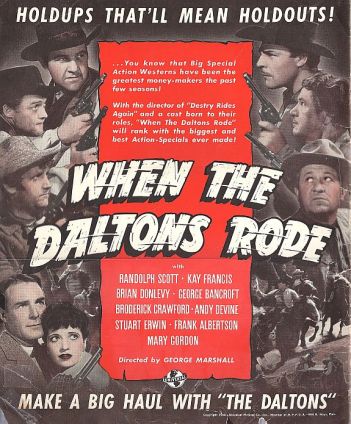