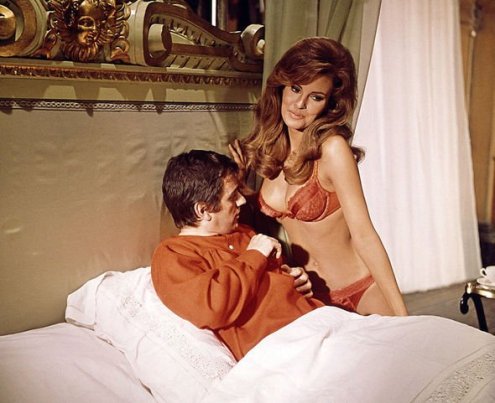 BEDAZZLED has a wicked good time reworking the Faustian bargain cautionary to Swinging London in this 1967 comedy produced & directed by Stanley Donen, giving free rein to the irreverent satirists Peter Cook and Dudley Moore. The two developed the story, Cook then wrote the script, Moore handled the music scoring, and they co-starred, with Cook as The Devil (posing as ‘George Spiggott’) and Moore as his love-yearning patsy ‘Stanley Moon’.

A cook at a Wimpy’s fast food outlet, Stanley pines for waitress ‘Margaret’ (Eleanor Bron) but is so tongue-tied around her that in his misery he contemplates suicide. His bollixed attempt at escape from angst brings George/Satan into play, promising Stanley seven wishes—in return for his soul.

“In the words of Marcel Proust – and this applies to any woman in the world: If you can stay up and listen with a fair degree of attention to whatever garbage, no matter how stupid it is, that they’re coming out with, ’til ten minutes past four in the morning… you’re in.” 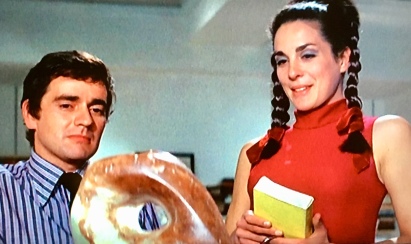 Though not a huge hit in the States, 63rd for the year, a gross of $3,800,000 easily canceled out the $770,000 price tag, and the refreshingly cheeky movie earned a loyal fan base. Along with the droll sarcasm of the duo, which includes sending up the day’s dippy pop culture and some really funny flaying of upper-crust Brit twitdom, is a good measure of welcome, playfully blasphemous skewering of religious mumbo-jumbo. Basically a series of sketches thinly tied together, mostly quite clever, some just silly, at 103 minutes, it runs on maybe a bit too long. Best seen with properly sardonic company.

Around seven of those minutes are given to displaying the pulse-jolting body of Raquel Welch, on hand as ‘Lust/Lillian Lust’. Writhing out brazen sex appeal to die for, she also does fairly well with a teasing Southern accent: showing early on more of a flair for comedy than drama, where she was…well, not bad at comedy. 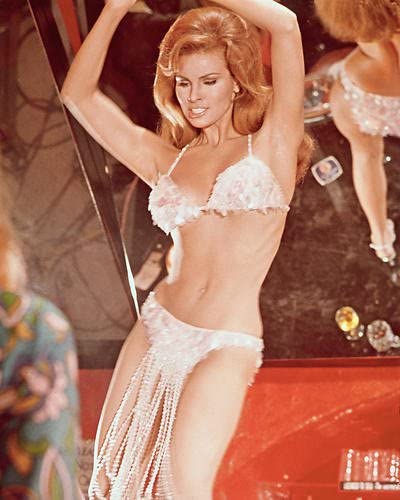