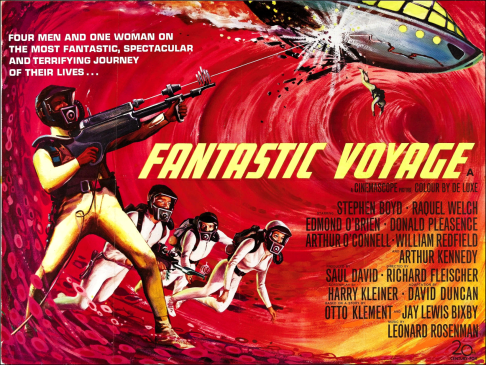 FANTASTIC VOYAGE entered sci-fi movie fans bloodstreams in 1966, its dazzler visual design making enough of an impression that the “You’ve never seen this before!” adventure still summons nostalgic smiles years later. That the plot is preposterous is secondary to the fun factor. How often do you get a chance to save the life of a brilliant scientist, beat the Russians and yank antibodies off the body of Raquel Welch in the process?  “A woman has no place on a mission of this size!” Like hell.

Both the U.S. (on behalf of Mankind) and the Soviet Union (see Badenov,B.) develop a miniaturization process, but the genius who can make it work longer than one hour needs an emergency brain clot operation. Team America reduces the nifty mini-sub ‘Proteus’ and a crew of five to microscopic size and injects them into the comatose scientist in order to zap his clot with a laser rifle. As the heroes (a saboteur among them) navigate the patient’s interior, outside the command center clock ticks and officers pace nervously, consuming cigars at a rate that says the balance of the Cold War depends on it. Abort! Destroy the clot! Abort! Proceed! Forget the windstorm in the lungs: when do those antibodies attack the babe?

Compared to getting across L.A., this should be a cinch

Well-paced by director Richard Fleischer, who’d demonstrated a knack for submarine peril (20,000 Leagues Under The Sea), the script by Harry Kleiner includes a few obligatory ‘in awe’ murmurs from the crew to go with learn-on-the-job technical instructions (“Turn that knob on the starboard side!”) and bandying of medical terms and whatever Latin sounds authoritative. Things get off to a suspenseful start from the credits sequence: white teletyping to suggest Top Secret backed by the atonal scoring from Leonard Rosenman, followed by an assassination attempt (friggin’ Soviets) that provokes the clot plot, hence the do-or-he-dies mission.

Along with serving to delight kids, bemuse physicians and physicists, and intrigue death fiends at the Pentagon, the voyage accomplished several missions. It proved producer Saul David (Von Ryan’s Express, Our Man Flint) was on target to risk $5,115,000—at the time the most ever ventured on a sci-fi picture—when box office returns hit $13,800,000, the year’s 22nd most successful show. The complex and inventive work from the technical folks won Academy Awards for Art Direction, and Special Effects, plus nominations for Cinematography, Film Editing and Sound Effects.

This marked the first lead role for the newest society-rattling bombshell: Welch, 25, landed full force that year with her bikinied cave-girl in One Million Years, B.C. and an iconic poster that dominated bedrooms, garages, dorms and barracks from Vermont to Vietnam. For leading man Stephen Boyd (the missions Handsome Guy, representing the C.I.A.) it somewhat balanced his king-sized ’66 faceplant of The Oscar (a must-see). Supporting the favored ones to deliver bromides, threats, orders and cigar smoke are actual talents Donald Pleasence, Arthur Kennedy, Edmond O’Brien and Arthur O’Connell.

Look, one of us paces, one smokes a cigar: I’ll flip you for it.

The colorful special effects, though dated today, were pretty darn cool back then, and the large-scale sets are very impressive, designed to give us peeks into veins, heart, ears, brain, lungs and the various matter that courses through them. Free laughs come from the mini-forklift that picks up the shrunken Proteus to carry it to further shrinkage and placement in a syringe. Biggest chuckles come when Boyd and the boys frantically (and all too willingly) have to pull clinging anti-bodies from Raquel’s clinging wetsuit. I vividly recall giggling with my pals (attention Don Blakeslee, D.D.S.!) when several pairs of actor hands went where millions of Joe Blow’s could only wish to land.

Gallantry is not dead

With William Redfield, Jean Del Val, Barry Coe (once pushed by Fox in Peyton Place and The 300 Spartans, reduced to a half-dozen lines here), Ken Scott and James Brolin (somewhere, as a technician).  100 minutes.

So, when does the toy come out? Christmas? This will go great with the Flint lighter and 007 attaché case. 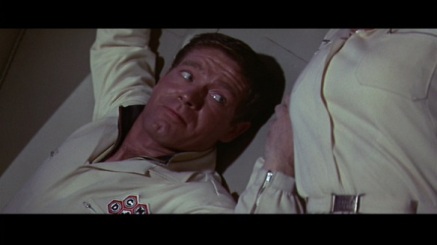 The interior pressure must have been considerable

One death by Yuck right around the corner