DUNKIRK, the superb, long-ignored, old-school version, was rescued on disc more than six decades after its release in 1958. Those who got an eyeful of visuals (and busted eardrums) from the director-shows-off 2017 hit should watch this to get a clearer idea of what the 1940 military fiasco/triumph really involved. Bonus!—in this one, you’ll actually be able to differentiate characters, understand non-muffled and/or mumbled dialogue and invest some emotion in the spectacle beyond selfie sharing “Dude, like, that was like, cold awesome! So, like, where were they?”  *

France, 1940. Outmaneuvered by the German blitzkrieg, Allied troops are hemmed in on the beaches at Dunkerque. While the Luftwaffe pounds the crowded shore, the over-stretched Royal Navy is joined by volunteer civilians bringing their small boats across the English Channel to rescue as many men as they can. 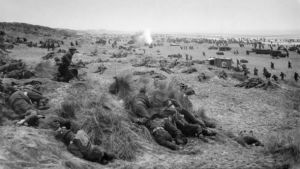 Excellently directed by Leslie Norman, the screenplay by David Devine and W.P. Lipscomb was based on the novels “The Big Pick-Up” by Elleston Trevor and “Dunkirk” by Lt Col Ewan Butler and Major J. S. Bradford. The ever-sturdy John Mills once again excels in uniform, this time as a worried British corporal trying to keep his decimated squad together. Favorite hardies Bernard Lee and Richard Attenborough excel as two of the civilian sailors who brave the dangers of the evacuation rally. Thousands of extras were employed, film clips from the real event are well integrated, and the mixture of special effects miniatures and elaborate live action is superbly meshed. Malcolm Arnold’s tense score echoes the one he did a year earlier for The Bridge On The River Kwai. 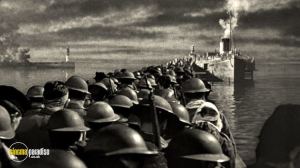 Unlike the later version, which began and concluded with the barest of framing information and concentrated on the nervous immediacy of action scenes, the 134 minutes allotted to the ’58 telling build the event gradually, letting a large number of characters develop enough that we actually relate to and care what happens to them, airs various viewpoints as to the nature, causes and blame for the debacle, and doesn’t cheat on scope. The script shows maturity both in its use of profanity (then still taboo over in the U.S.) and by not turning the show—about a colossal, humiliating defeat as well as a heroically assisted mass escape—into a rah-rah junk message about glory. Naturally a hit in Britain, where it earned $1,750,000, over in the States a weak showing $310,000 left it un-rescued at 146th place. 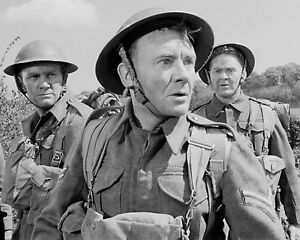 * The 2017 Dunkirk is thrilling, but it’s also a beach-too-far overrated: the rhapsodic praise from worshipers of director Christopher Nolan was so strident you’d they’d never seen a movie before. From the standpoint of technique, Nolan’s take was a smash: emotionally it’s a dud. The ’58 Dunkirk was produced for £400,000/$1,025,000, roughly £7,634,000/$10,481,000 in 2021, but that doesn’t really cover it: done today, on this logistical scale, it take at least 10 or 15 times that much. Even so, you’d most likely end up with a screenful of special effects (Midway), maybe a doofy romantic subplot (Pearl Harbor), and certainly a pantload of lame exposition, crayon-explaining to a mystified audience where Europe is located, was this the Tom Hanks war?, when does Lincoln make his speech?, is that the same beach from Troy?  Yeah, yeah, Dunkirk 2017 was directed by God….. 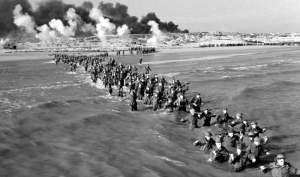