MYSTIC RIVER scored a big 2003 hit for Clint Eastwood as a director, one of his best in that facet of his long and surprising career. The wrenching drama of a horrible crimes tragic aftermath reaped critical praise, box-office success, and peer recognition for his handling, and for the excellent work from a top-line cast. Oscar nominations went up for Best Picture, Supporting Actress (Marcia Gay Harden), Director, and Screenplay (Brian Helgeland), and it won for Best Actor (Sean Penn) and Supporting Actor (Tim Robbins). Produced (by Eastwood) for $30,000,000, from a novel written two years earlier by Dennis Lehane, it grossed $156,595,000 ($90,135,000 domestically, $66,460,000 in foreign markets).

Boston, the mid 70s. Three boys—‘Jimmy Markum’ ,’Sean Devine’ and ‘Dave Boyle’—are playing street hockey, when two grown men brazenly kidnap Dave, who they abuse for days before he manages to escape. Fast-forward a quarter century. Jimmy (Penn), an ex-con, owns a neighborhood grocery, is married with two daughters. Sean (Kevin Bacon), is a police detective, estranged from his wife. Dave (Robbins) is also married with a young son of his own. When Jimmy’s older girl is murdered, Sean gets the case and begins to sift through leads and motives. Not fast enough for ripped-apart Jimmy, who uses his street connections to pursue matters on his own. Dave, meanwhile, has alibis and attitudes that don’t square. 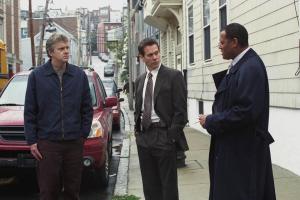 High-powered acting all round, with particularly vital work from pain-consumed Robbins and Marcia Gay Harden, as ‘Celeste’, his increasingly unnerved wife.  Since the enormity and immediacy of Penn’s characters anguish is demonstrated front & center, repeatedly, audience sympathy is axiomatic, disguising that to a degree it’s an automatically showier part. He’s very good, but I think his Oscar ought to have gone to either to fellow nominee Ben Kingsley, crushing the House Of Sand And Fog, or to the un-nominated Russell Crowe for his wonderfully heroic Master And Commander. The slow-burn meltdowns displayed by Robbins and Harden are faultless.

Pasted from here to hell and gone (including Boston) for too often starring in movies that use violence as a validating factor, Eastwood’s to be commended for keeping the tone here measured and reflective, presenting the trauma ripple that violent deeds (obviously here they are truly foul) inflict, lingering in the psyche and affecting/infecting others long after events transpire. Also strongly felt, thanks to the deeply layered yet uncluttered script and the mournful-tones look of the film, are the bonds—better or worse—produced by family, loyalty, history and environment. It’s also refreshing that the working class Boston vibe isn’t played up to cliche. Carefully paced, the screws—procedure, justice, irony, ruin—tighten until they snap, locking off escape. 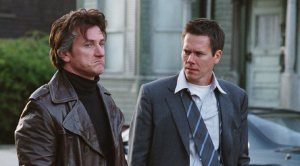