Been-around-the-chopping-block chef ‘Frank’ (Shannon) meets sultry ‘Lola’ (Imogen Poots) on a Halloween night in Las Vegas (maybe not Grounded Zero time & place for a secure relationship) and their one-night stand turns into something that racks them both over lust-meets-love’s blue-hot coals (I like the sound of that, in case any slinky-kinky Lola Poot’s are out panting there within a continent’s reach of Vegas). But then, as soon as you can say to your friends “I think I met someone”, he finds she has a few secrets (like “her own life”) and jealous rage sends him to Paris to have a man-to-man gut-punch with ‘Alan’ (Michael Nyqvist), a rich—and richly decadent—author. Someone/s getting played.

Ten years in gestation, the maiden film from journalist Michael Ross—he wrote & directed—holds attention for its brief 88-minute muse, thanks to the game actors, a sleek visual look (cinematographer Eric Koretz making a little look like a lot) and no small amount of “please-make-it-mean-something” idle curiosity. Don’t tell me I’m wasting an hour and half over a few sex scenes (this, written with as straight a face as can be mustered). There’s a first time for everything….

Motivation (on Frank’s part) is woefully lacking, and while Shannon and Poots each have odd charisma, they don’t generate believable chemistry together, and the script is pitiful.  Shannon, normally believable—often frighteningly so—doesn’t sell it here as a romantic partner: there aren’t enough red flags in Beijing to flap over Frank’s twerky behavior. Nyqvist (our now-sadly-missed pal from The Girl With The Dragon Tattoo and co.) scores as a slimy Eurotrash reprobate, but his final crunch-up with Shannon is too much escargot to swallow. Implausible and dispiriting from the get-go, the everyone-is-screwed story ends with a big “You’re kidding”? cheat.

Though Sundance attendees seemed to dig its glossy seediness-as-neediness geek chic, the decade-long dream from Mr.Ross ( but why?) never gained traction elsewhere, falling into the one-night-stand nether regions with a gross that totaled exactly $9,188.00—taken off life support at 317th place for the year. 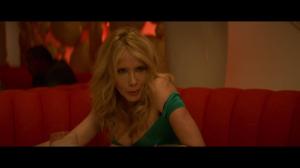 Mommy’s a sweetheart from the port + storm realm