HARPER is easily the best “private eye” movie of the 60s, that subset of the crime & suspense genre having fastened itself onto watch-&-go-to-bed TV series, while the big screen was mostly the province of flashier international spy-jinks. The 1966 hit was adapted by William Goldman from Ross Macdonald’s 1949 novel “The Moving Target”, the first featuring detective ‘Lew Archer’, changed to Lew ‘Harper’ for the film. Oft-repeated film lore has it that star Paul Newman favored the ‘H’ change-up, after having lucky strikes with The Hustler and Hud. True or not, the slick & sassy combo of actor and character made for a shrewd pick—star persona and skill, backed by a strong script and a colorful supporting cast. Directed by Jack Smight, the element blend helped recover some of Hud’s steam, escaping over three years through A New Kind Of Love, The Prize, The Outrage, What A Way To Go! and Lady L. It also solidified Newman’s fan base appeal, beyond the established aura, one of a guy intense and dangerously seductive, into that of a flawed and sympathetic charmer: quick, smart, vulnerable but durable, self-aware and self-contained. You root for the guy. *

The sun-kissed indulgence of certain Southern California denizens in the mid-60s presents a rogues gallery of kooks for cool-carrying private investigator ‘Lew Harper’ (Newman) to sift through.  He takes on the case of a missing millionaire, unloved but for his money, which, hook being crook, may be bound for the wrong hands. Sly questioning, spry legwork around various SoCal locales and making it through occasional pummeling shows Harper that all the hands on this sundeck are the wrong kind. In the fondue are the rich guy’s wife ‘Elaine Sampson’ (Lauren Bacall), disabled and caustic; sex-tease daughter ‘Miranda’ (Pamela Tiffin) and her too slick private pilot boyfriend ‘Allen Taggert’ (Robert Wagner); blowsy former actress turned lush ‘Fay Estabrook’ (Shelley Winters) and her snide hubby ‘Dwight Troy’ (Robert Webber); lounge singer and junkie ‘Betty Fraley’ (Julie Harris) and goon ‘Puddler’ (Roy Jenson). On the periphery are Harper’s lawyer friend ‘Arthur Graves’ (Arthur Hill), Harper’s about-to-be-ex-wife ‘Susan’ (Janet Leigh) and several-oats-short-of-a-meal cult guru ‘Claude’ (Strother Martin).

* Harper was director Smight’s best movie: No Way To Treat A Lady was amusing, but he bore a good deal of blame for The Illustrated Man, Damnation Alley, Midway, The Secret War Of Harry Frigg and Airport 1975. 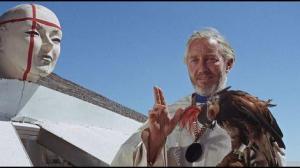 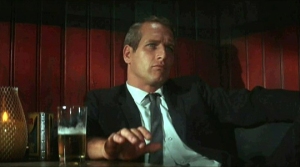 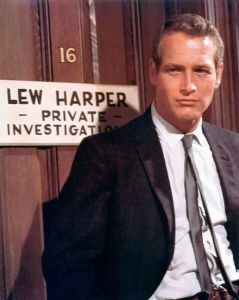