THE DESCENT——“Hey, there’s something down here...”   That would be—yes, we are compelled to say it—“Six chicks with picks.” But, those hardy depth-dwellers who made this 2005 horror feast a hit know that when the daredevil sextuplets find out what that “something” actually is, the stalactites will drip with more than water. If dank crawlspaces, disoriented panic in the dark and pools of decayed goop aren’t enough to keep you out of unexplored holes, maybe the the imminent prospect of being devoured alive will make clear why most people prefer the beach. 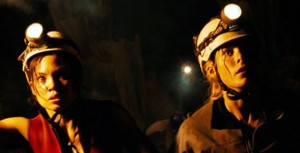 Wanting to prove a variety of ‘whatever’s to themselves, five girlfriends who’ve gone caving together before, joined by a sassy newcomer, meet up in the Appalachians of North Carolina (where Deliverance went south) for a new exploration. After some preliminary bonding (via drinks and sex talk), they head below. First, a passage collapses behind them. Then, the rather arrogant planner reveals that she’s deliberately put them into an unexplored system. What was that weird sound? Swear I saw something move, and it wasn’t an opossum. Uhmm….what it…they…are is a humanoid (accent on “oid”) colony that over eons has adapted to life underground. And their roadkill diet just took a big leap into exotic, high-carb dessert territory.

Written & directed by Neil Marshall (Dog Soldiers), once you get past the trite meet-up material, this fits the definition of an A-ticket chill-ride, with creepacious settings, loathsome adversaries who have all the advantages, tight squeezes, sudden drops and blood & guts ga-gore. Though set in the States (in non-existent “Chatooga Natl. Park“) it was filmed on location in Scotland, with 21 assorted cave sets rigged up at Pinewood Studios in London.

Though the dialogue doesn’t win any laurels, the story grips, the acting is fine, the sets and creature design excellent. 100 minutes worth, not for the faint of heart. Made efficiently for £3.5 million, it drew audiences to the tune of $57,051,000, enough to see that four years later there was The Descent Part 2. It only did one-quarter as well.

* Director Marshall saw to it the cast were kept from seeing the performers playing the “crawlers” in their full make-up until they made their first appearance in the story. Natalie Mendoza recalled “When the moment came, I nearly wet my pants! I was running around afterwards, laughing in this hysterical way and trying to hide the fact that I was pretty freaked out. Even after that scene, we never really felt comfortable with them.”    The Descent vied that same year with another underground thriller, The Cave. It’s okay, but isn’t a patch off the six-pickers, even with a budget almost nine times as large. 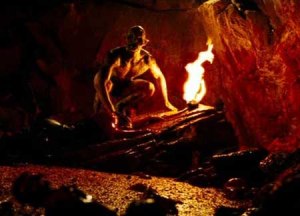