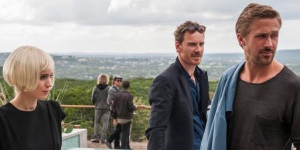 SONG TO SONG—-make that ‘Slog to Snore’, as writer-director Terrence Malick’s 2017 addition to his menagerie of meditative muses on Meaning is even more of a meander than his preceding mopes Knight’s Cup (2015) and To The Wonder (2012). This one was shot back-to-back with Knight’s Cup in ’12, not making its way to conflicted critics and sparse attendance for five years. His The Tree Of Life, released in 2011, was breathtaking, and I’m one of the minority who enjoyed the effective ennui of ‘Cup’, but ‘Song‘ runs even with ‘Wonder’ in the Deliberately Alienate the Audience genre. Saving graces (barely) are in watching the actors and camerawork. * 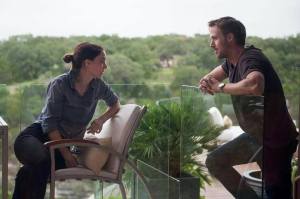 Austin, Texas. ‘Faye’ (Rooney Mara) is a guitarist hopeful involved with album producer ‘Cook’ (Michael Fassbender), who also manages ‘BV’ (Ryan Gosling). Waitress ‘Rhonda’ (Natalie Portman) marries Cook. Faye and BV hook up, but Faye is still playing beds with Cook. Then Faye flings with ‘Zooey’ (Berenice Marlohe), and BV has a thing with ‘Amanda’ (Cate Blanchett). It’s a lose-lose situation for everyone, especially the viewer, who can’t connect with any of these characters, but must ‘devine’ them through shards of ceaseless camera moves and voiceovers. Faye breathes at us “There is something else, something that wants us to find it.” Namely the money back, spent on ticket, disc or rental. Grosses slunk in at $1,778,000 worldwide, 185th place for the year.

It does look great (all Malick movies do), thanks to cinematographer Emmanuel Lubezki, filming in and around Austin and down in Mexico’s Yucatan. The actors bleed what they can out of rock-nothing in the script, with Fassbender, Blanchett and, briefly, Holly Hunter, making such mark as they can. 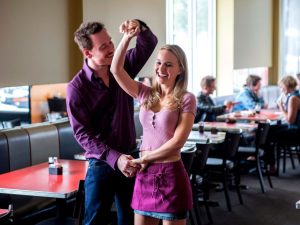 Patti Smith and Iggy Pop show up in pointless cameos (the idea of their adding clarity is faintly amusing) and Val Kilmer walks through so fast you’ll miss him if you reach for something that might keep you awake. With Lykke Li, Brady Coleman, Linda Emond and Tom Sturridge. 129 minutes of the sort of indulgent artsy foof that gives frothing Red State mouthpieces easy ammo for their moron-cheered culture warring. 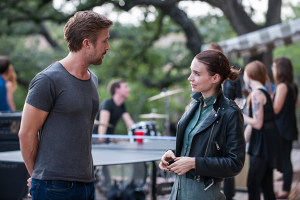 * Malick:  “I think you want to make it feel to like there just bits and pieces of (the characters’) lives”….”It’s a hard thing to convey and we didn’t know how, so doing lots of locations and lots of songs was our best guess about how to do that.”

“We didn’t know how”….We’re usually on board with Terrence—-Days Of Heaven, The Thin Red Line, The New World, The Tree Of Life, Knight Of Cups—but there is a limit.