TO THE WONDER possibly helped writer-director Terrence Malick exorcise parts of his past, as the 2012 What’s-It-Mean drama at least partly stems from autobiography, as did the previous The Tree Of Life, and the later Knight Of Cups. Part of the wonder in this dirge is wondering how many more scenes of Olga Kurylenko “happy spin-dancing” we will see before minute-113 rings down. Answer: too many–and it’s not like Ms. Kurylenko is hard to look at. It is a chore, though, to sit through the improv motions the script-that’s-not-a-script has her pirouette past, along with likewise dead-zone capering from the other capable actors involved. Painful, of the type that has you finally exclaim “Oh, for Art’s sake, come the f–k on!”

An American in Paris (each minus any charm) brings his French girlfriend and her daughter back to live with him in—Bartlesville, Oklahoma. Soon enough, ‘Marina’ (Kurylenko) finds the near-total-absence-of-a-character named ‘Neil’ (Ben Affleck) not enough to hold her, let alone the myriad opportunities for excitement available in—Bartlesville, Oklahoma. She goes back to France, and he has a fling thang with life-burdened ranchette ‘Jane’ (Rachel McAdams), who he then basically screws over. Thankfully, he can now bring Marina (who’s decided Paris is not as rewarding as—Bartlesville, Oklahoma) back. Then, go figure, she loses it again, and all this is watched over (mostly in voice-over, which is how everyone non-communicates) by a beleaguered Catholic priest (Javier Bardem). You will not care. If you do, there is nothing I can do to help you. Or as Marina would say (in voiceover), “I write on water what I dare not say.” (glub)

Thanks to Malick’s patented painstaking and the eagle eye of cinematographer Emmanuele Lubezki, there are a goodly number of evocative shots, though the whole ‘gliding camera’ gambit is worked to the rings of Saturn here. McAdams somehow milks a character out of thin air. Affleck is a dead loss. Bardem, as always, has presence, but the missing-in-action writing does him little justice. One brief flair of life comes when vibrant Italian actress Romina Mondello shows up for about five minutes to try and goose some Dolce Vita into—Bartlesville, Oklahoma.

As is his style, Malick cast actors and then discarded their footage for the final cut. Missing this time is whatever he got with Rachel Weisz, Jessica Chastain, Michael Sheen, Amanda Peet, Barry Pepper, and Michael Shannon, any of whom would be welcome to make some wonder happen.

Filmed in Oklahoma, in the towns of Bartlesville (apologies, you surely are more fun than this movie) and Pawhuska, and in France, in Paris and Mont-Saint-Michel. Tatiana Chiline plays the unsympathetic kid, Charles Baker the why-him? motel boink for Marina. The total international gross came to $2,801,000. 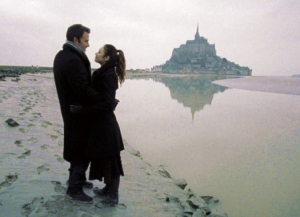