NORTH FACE scales a harrowing route to the topmost perch in the adventure sub-genre of mountain-climbing thrillers. Its death-defying (and inviting) historical protagonists keep company with a select few whose skill and daring battle impervious lofty Nature and down-to-earth common sense. Directed by Philipp Stolzl, this aced 2008 teamwork comes from Germany; it didn’t rappel to the U.S. until 2010.

“Another couple of fools. Come in a train and leave in a coffin.”

Switzerland, 1936. The Eiger looms 13,015 feet. The nearly mile-high sheer wall of its Nordwand—North face—had never been successfully ascended. Spurred on by Nazi propaganda efforts for the upcoming Olympic Games, several international teams show up to claim the summit. Taking the lead are Toni Kurz (Benno Furmann) and Andi Hinterstoisser (Florian Lukas), childhood friends from Bavaria. On their tail are a pair of arrogant Austrians, looking forward to their country’s eventual incorporation into Germany. Though German (from Berchtesgaden, no less, Hitler’s Alpine retreat), Toni and Andi are apolitical: they’re tackling the man-killer to prove themselves, not for the glory of the Reich. Watching down below is their hometown friend ‘Luise’ (Johanna Wokalek), a photographer, there with her supervisor ‘Henry’ (Ulrich Tukur), a cynical reporter from Berlin. Triumph or tragedy, he’s looking for a dramatic scoop; she’s in love with Toni. Up on the North face, the men confront rock falls, storms, avalanche, wounds and frostbite.

The story is factual, the script blends in fiction for added dramatic effect. Director Stolzl worked on the screenplay with Christoph Silber, Rupert Henning and Johannes Naber; along with the production detailing, they recreate the perils of the ascent with subtle touches on the wider social descent into suicidal, hyper-masculine nationalism. Kolja Brandt’s cinematography—location shot in Switzerland and Austria—puts you right there on the rocks and ice, the special effects enhance rather than overwhelm, and Christian Kolonovits provides an understated score, suitably ominous. Tension is high, and by evading histrionics the drama carries an emotional charge. Just seeing the now-primitive gear the guys use is cause for wonder. Fine work from all in the cast, with particularly compelling  characterizations from ruggedly handsome Furmann (Joyeux Noel), a quietly beguiling Wokalek (The Baader Meinhof Complex) and the urbanely sleazy Tukur (The Lives Of Others). 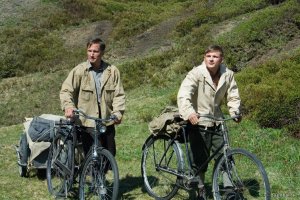 * Two years after the event shown in this movie, the North was finally won. An “Alpine Journalist “editor deemed it “an obsession for the mentally deranged” and “the most imbecile variant since mountaineering first began.” He clearly hadn’t met Clint Eastwood. The ’36 attempt was also covered by an Emmy-winning 2007 documentary The Beckoning Silence.

One thought on “North Face”