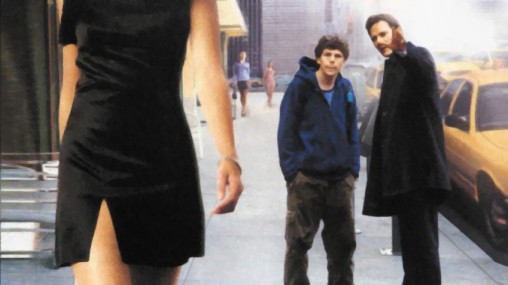 ROGER DODGER —-gee, what a sweet guy. Based on this lacerating 2002 indie, Roger is the sort of full-metal prick that, if you knew him—or just met him for more than a few minutes—you would wish to visit upon his person grievous bodily harm. Mis-described as a comedy-drama, it was too corrosive to find much audience; box office stopped at $1,194,497.  But critics approved, and it was a film festival fave, an indication that there was an extra quotient of cynicism-quaffing sourballs attending such venues that year. Drama, yes. Comedy? Get help.

Hot-shot advertising copywriter ‘Roger Swanson’ (Campbell Scott) plies his trade in Manhattan, and in the glib-is-good social whirl extends his credo “You can’t sell a product without first making people feel bad.”  Shortly after his boss (Isabella Rossellini) ends their romp routine, his 16-year-old nephew (Jesse Eisenberg, 18, feature debut) shows up from Ohio, hoping his slick uncle can teach him how to score (not on S.A.T.’s). Roger takes the naive and decent punk along on a caustic swoop through a bar, a party and a brothel. The lessons—how to act & how not to be—aren’t free of cost. 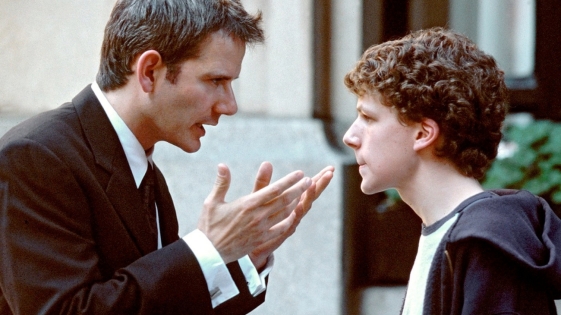 A first-time out project, written, directed & produced by Dylan Kidd, it’s marked by some admirably wicked dialogue and excellent acting, but marred by the relentlessly cruel tone and a glut of maddening camerawork from the jiggle-it-ceaselessly school. Question: when you’re looking directly across a table at someone, in conversation, does your head bob, weave, twitch and rotate like a bat on speed. Kidd’s also guilty of introducing Jesse Eisenberg to a world already writhing from force-fed irritants. He’s certainly a capable performer, but—confession time—he’s one of the few actors I genuinely, chemically, dislike to watch. Put it this way, when he plays an icky creep (The Social Network) we have no trouble believing it. Here, he’s the nice guy, and Scott is the self-indicting bastard (95% of one, anyway), yet Scott—who should have been a big star, like his dad, the great George C.—is utterly compelling and watchable to a fault. He nails Roger’s nastiness as brilliantly as Aaron Eckhart did for a similar s.o.b on In The Company Of Men.

Also very good are the unsung Elizabeth Berkley and Jennifer Beals, as two comely, fun and bright catches who are charmed enough by the guileless nephew to put up with his taunting uncle—to a point, until Roger does what he does best: alienate. The acid-bath is worth it for the performances, but you need a shower afterwards.

“I could tell you that what you think of as your personality is nothing but a collection of Vanity Fair articles. I could tell you your choice of sexual partners this evening was decided months ago by some account executive at Young & Rubicam. I could tell you that given a week to study your father and the ways in which he ignores you I could come up with a schtick you’d be helpless to resist. Helpless.”