A FUNNY THING HAPPENED ON THE WAY TO THE FORUM  has troublesome Roman slave ‘Pseudolus’ (Zero Mostel) regard a bottle of wine and pose the question “Was 1 a good year?”  Perhaps only Mel Brook’s ‘2000 Year Old Man’ could answer, but more recent fodder-folk of empire know that 1966 provided a vintage crop for “Comedy Tonight“. That’s when Richard Lester did a glorious job directing this film version of the Tony-winning play. * 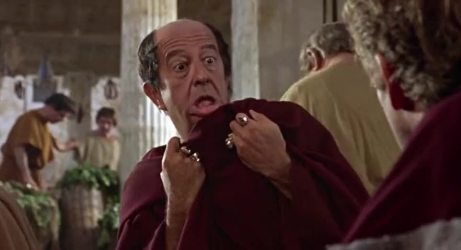 Stephen Sondheim provided the music & lyrics; Melvin Frank & Michael Pertwee wrote the screen adaptation. Though some fans of the stage show took issue, Lester & Co. made a smart move to avoid the bane of many musicals—over-length—by wisely cutting seven songs, retaining just a half-dozen. This kept the zany farce in check at a whirlwind 99 minutes, the droll satire and burlesque slapstick dizzying and joyous without lapsing into exhaustion. “I live to grovel.” 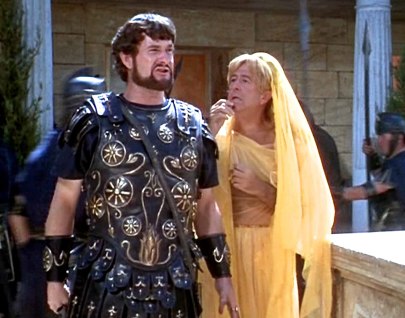 Tons of fun, with best-ever work from Mostel (much better than in the The Producers), Silvers (razor timing), Gilford (Mostel’s close friend in real life) and Hordern (priceless); everyone gnawing any morsel they can seize from the basket of wit, tease and lunacy. Opera singer Greene’s hearty despoiler Gloriosus is hilarious. Sexy dancing maidens? Look no further. It’s Rome, the height of civilization. What happens in Rome….

Ken Thorne won an Oscar for adapting the scoring. Photographed by Nicolas Roeg, shooting in Spain, using some sets left over from Samuel Bronston’s epic The Fall Of The Roman Empire. Just as he’d do so superbly a few years later in The Three Musketeers, Lester stuffs the sidelines of the silliness with an essentially realistic cache of grubby, flavorsome details to ape the period. His quick cutting (John Victor Smith edited) and Roeg’s camera skill pace the rat-a-tat script and the cast’s ramming-speed delivery. Put on for $2,000,000, it captured $8,500,000, 35th place for the year. “As magnificent as that?”

* Mostel and Gilford had starred in the 1962 play. It ran for 964 performances, then lived on in many revivals. The immortal Keaton,70, was terminally ill, but he came through like a champ in his last film role; he died before the movie was released.