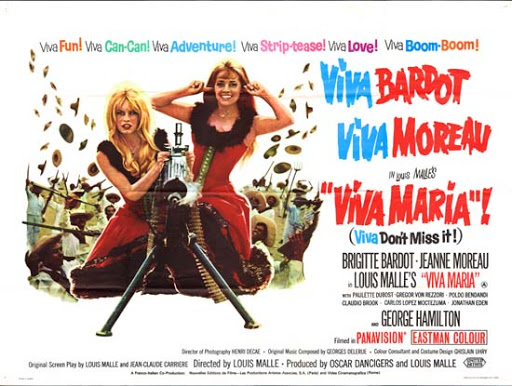 VIVA MARIA! deserves the exclamation point. Take adventure, revolution, music and sex, mix spoof and homage, then add Brigitte Bardot and Jeanne Moreau at the height of their beauty and popularity. Uncork and enjoy like vintage champagne. Directed in 1965 by Louis Malle, who’d made a star out of Moreau with Elevator To The Gallows, The Lovers and The Fire Within. He’d struck out with BB a few years before on A Very Private Affair, but more than made up for that with this cheeky, endearing romp, which he co-wrote with Jean-Claude Carriere. *

1907, the Central American country of ‘San Miguel’ (no, there isn’t one). Anarchist explosives expert ‘Maria’ (Bardot) becomes inadvertent partner to showgirl ‘Maria’ (Moreau), part of a traveling circus troupe. The gals hit it off, and seduce a fervent fan base by, among other things, inventing the striptease. While BB’s Maria cheerfully racks up lovers, Moreau’s equally sweet but more discriminating Maria gets involved with a socialist rebel. When the oppression of the peasantry from landlords, government troops and clergy becomes unbearable and revolution ignites, the smoldering passion of Jeanne’s Maria and the blow-up skills of Brigitte’s rise to the occasion. We smile.

Bardot, 30, and Moreau, 37, were never more ravishing, and they play off each other delightfully, teasing their different screen-projected personas and sexual allure quotient (sufficient to launch an uprising), displaying winsome comic chops and, in BBs case, bravura physical ability in the action sequences. After Alain Delon dropped out, Malle cast George Hamilton, 26, as the rebel: wooden even when dubbed, he doesn’t damage the movie. 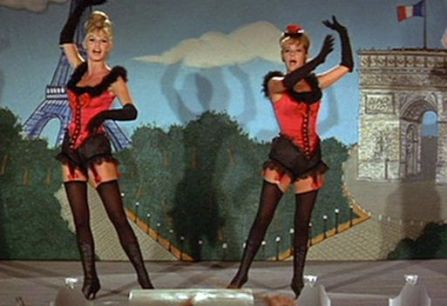 The musical numbers the ladies put on are great fun, the chuckle-stocked comedy runs from sly to absurdist (mostly the latter), the action in the second half of the film is plentiful (and lightweight). The Catholic clergy gets tweaked (they were not amused), as does the ruling class in general (Viva!), and it all looks grand in Henri Decaë’s luscious color cinematography. George Delerue provides a caressing music score. The ‘more serious’ second half wanders a bit, but it’s so enjoyable just to watch the beguiling actresses and giggle at the goofy gags that it amounts to what would later be termed a “hangout movie”. Look, a chance to chill with Brigitte Bardot and Jeanne Moreau isn’t anything this bewitched boy is going to pass up over mere editing quibbles.

* This was an early entry from co-scenarist Carriere, whose 150 credits would include The Unbearable Lightness Of Being, The Discreet Charm Of The Bourgeoisie, Belle de Jour, The Horseman On The Roof, That Obscure Object Of Desire, Valmont and Borsalino.

Partially an homage to the 1954 Gary Cooper-Burt Lancaster western Vera Cruz, (two different personality types involved in a Mexican revolt), it flips the sexes. Moreau told Time “Films have never shown the kind of relationship that can exist between two women,’ she says. ‘Men like to think that women must be constantly jealous of each other, never trusting, never in rapport. That is not true, of course, certainly not today. This film could show that.”

Malle on Bardot: “I have always felt that Brigitte Bardot has something of the quality of Alice in Wonderland. If we talk about “professional” players and “instinctive” ones, I definitely put her with the instinctive.”   The press had a heyday predicting the two famous seductresses would clash and hate each other, but they got along well. The main hassle was the lengthy (20 weeks) and exhausting location shooting—with much sickness among cast and crew.  Malle: “When I got on the set on the first day of shooting there were something like seventy journalists. Not only the French press, but the American press, the Italian press — it was ridiculous. In the months before we started they’d built up this rivalry between Moreau and Bardot; there were rumours in the press that they hated each other, which was completely untrue….we had so many different locations all over Mexico, we had a huge crew, the logistics were impossible. Jeanne and Brigitte would take turns getting sick. We had to reschedule constantly.”

It’s a tough job, George, but you can do it