DAMIEN: OMEN II —-“just when you thought it was safe to go back to church” came the second go-round for Beelzebub-boy ‘Damien Thorne’, who’d made Gregory Peck’s life miserable as his dad in the huge 1976 hit The Omen. In this 1978 sequel, William Holden plays his uncle, who gets the bad news about the little devil, now 12, and keen to be mean. The  publicity tag-line was “The first time was only a warning.” 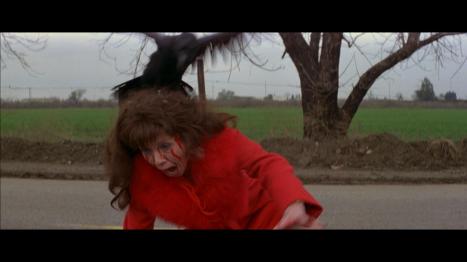 Jonathan-Scott Taylor, 15, takes Damien by the…well, horns, succeeding Harvey Spencer Stephens from the first film. Living with his industrialist uncle (Holden) and aunt (Lee Grant), Damien is enrolled in a military academy now, and soon enough supporting players begin to meet gruesome ends. The most eerie exit is given to Lew Ayres, who gets trapped under ice in a frozen-over lake.

Stanley Mann co-wrote some quality pictures: The Mouse That Roared, The Mark, Woman Of Straw, The Collector, A High Wind In Jamaica. However, he was also co-responsible for Meteor, Conan The Destroyer and Tai-Pan. This isn’t anywhere as bad as the last three, but, apart from a few “neat” deaths, it’s a plodder.

Don Taylor took over direction from Mike Hodges, fired for being too slow. Produced for $6,800,000, it suckered Satan sympathizers out of $26,800,000, their devotion to the diabolic making it the 25th most-seen picture of 1978. It was followed three years later by the lame The Final Conflict.

With Lee Grant, Robert Foxworth, Sylvia Sidney, Nicholas Pryor, Lance Henriksen and Elizabeth Shepherd (who gets squashed by a truck after having her eyes picked out by a raven—eeeuw!). Back from the first go-round, Leo McKern appears (sans credit) as the worried archaeologist ‘Carl Bugenhagen’.  He gets buried alive–so much for interfering with the Big D.  Meshach Taylor, later a fan favorite playing ‘Anthony’ in 152 episodes of the TV series Designing Women, made his debut here, as the doctor who discovers Damien has jackal blood and cells (cool!) in his body, but this foolish prying results in his getting sliced in half by a demonically manipulated elevator cable.

As for young Master Damien…irony being the playground of hobgoblins, it’s with an impish chuckle that we note that Jonathan Scott-Taylor also played Jesus (on the stage). Grown-up, he ditched acting and became a lawyer: make what you will with that hellish thought.