SEX AND LUCIA came about in 2001 because Spanish writer-director Julio Medem had a desire to—he expressed in interviews—make a “light” film after his dark 1998 Lovers Of The Arctic Circle. If this is his idea of “light”, we’d hate to see him when he’s bummed out. Lucia is sexy, to be sure, heat-seeking and put over so confidently by the three main female characters as to guarantee steamed glasses or stains of some kind when watching them perform/act/reveal themselves/get it on/ in a variety of ways. Unfortunately, it’s also deliberately confusing, self-consciously arty (and self-pleased with its pretense), rife with absurd behavioral chasms, stacked with plot contrivance, and in casting the males, it blows the money shot: instead of studs it delivers duds. Along with any humor that’s funny, there’s no-one to like. Look at, yes, but like? Nada. Empathy eludes. Some viewers are really taken (or taken in) by the film, others are left with the movie version of post-coital depression. “Hey, that was great, but, wow, I really gotta go: you take care now.”

When it appears her despondent writer boyfriend ‘Lorenzo’ (Tristán Ulloa) has committed suicide, Madrid waitress ‘Lucia’ (Paz Vega) flees headlong to a somnolent Mediterranean island. The story line serpents back & forth between past episodes in Lorenzo’s life, and Lucia’s recovery & discovery quest on the island. His were erotic encounters that left separate and lasting marks. The first was a one-night stand (in the sea, which incidentally is recommended by your faithful reviewer, if it’s somewhere tropical), with string-free ‘Elena’ (Najwa Nimri), the second an attempted extra-relational fling with lusty, string-along babysitter ‘Belén (Elena Anaya) that goes horribly wrong. In between are his abandon romps with Lucia. Lucia’s post-Lorenzo rebirth brings in the latter-day Elena and Elena’s f-buddy ‘Carlos’, who may also be someone else. Some of what happens actually did, some may exist in imagination. Some will rivet your focus (the near-porn coupling and enough incidental nudity to start a trend), some (much of the non-physical intercourse) may drift your attention to the nearest clock.

The men are poorly drawn; other than device mechanism for the plot/s ,there’s nothing about the disheveled drip Lorenzo that would stir any of the three carnally voracious felines to purr, let alone pounce. Carlos is just a dick, in every sense. The acting by all three of the women; however, is exceptional: their dynamism, along with their torrid desire quotient and total lack of physical inhibition (nice way of saying ” great sex scenes”) is something to behold. It’s too bad all the hard work (gulp) that went into the body showcasing and simulated stimulating doesn’t engage more than down-directed blood flow.

Vega’s open naturalism, Anaya’s come-hither wantoness and Nimri’s casual invitation lead into some sensual displays that test your sweat glands, but the script’s setups are artificial. When it comes to dealing with Vega and Anaya in their birthday suits, we can handle the plotholes. It’s just that afterwards you feel rather had by the pretend-deep but basically shallow enterprise.

Attractive location work was done on Formentara in the Balearic Islands (the other playgrounds in the archipelago are Majorca, Ibiza and Menorca), photographed by Kiko de le Rica. Music score is from Alberto Iglesias.

There was a good deal of praise, especially for Vega (justified), and it made $7,641,000, about a fifth of that in the US, where some of the more explicit explicitness was trimmed (so boink-traumatized Americanos wouldn’t forget about their beloved explosions for a few seconds).  128 minutes, a good twenty longer than the overladen story arc needed. With Javier Cámara (the fine actor in a thankless role as Lorenzo’s agent), Silvia Llanos (the ill-fated little girl), and Daniel Freire (boytoy Carlos/Antonio).

* The to-kill-for Paz Vega, 24 here, had been acting for four years in Spain: this was her breakthrough role. Many first became aware of her special beauty and charm three years later from her enchanting US and English-language debut performance in Spanglish. Paz is a bona fide heart-stopper, all the more so because she’s such a good actress. The devilishly enticing Elena Anaya, 25, had been acting for six years, and likewise won plaudits for this movie. Larger, less-serious crowds saw her camp it up as Dracula’s fiercest bride,a bright sick spot in the otherwise shrill 2004 monsterama Van Helsing. 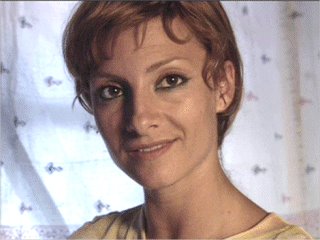 Najwa Nimri, 29 had achieved popularity as a singer and starred in director Medem’s previous film, Lovers Of The Arctic Circle.

Spanish filmmakers may be the planet’s least hesitant when it comes to exploring sexuality in their works, their actors fearless (if you’re going to shed your threads it probably helps to look like Paz Vega), and the intimacy issue will always either please or put off audiences. Being extra-brave (on the keyboard battlefield) yours truly was frankly drawn to this movie solely on the charms—and hope of seeing more of them—of the leading lady. Got my craven wish, and then some. (oh, yeah, and Art…) Confession supposedly good for the Hellbound, can we be more of a dweeb and venture that as the movie unfolded, we were struck by the churlish thought that maybe the director, besides needing to express ideas in a circuitous fashion, was looking for an excuse to spend several months with three of Spain’s hottest women, naked and doing the horizontal bop? Ditto vertical, etc. Certainly that would be the first time in entertainment history such a thing occurred. Oh, yeah, and Art…