PERSONAL SHOPPER, written & directed by Olivier Assayas, drew mostly positive reviews and a good deal of film festival buzz in 2016, with most of the up-talk (and a fair amount of down) centering on the performance of Kristen Stewart. Done for an indie trim $6,000,000, the 106-minute thriller wasn’t a huge audience hit, with an international take of just $2,820,408, but it has legs for the long run. 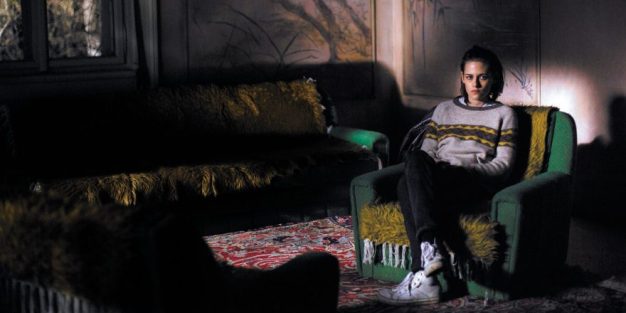 ‘Maureen Cartwright’ (Stewart) is dealing with a lot. Her twin brother has died from a heart condition, one that she shares. In between her duties in Paris and London as a personal clothes buyer for a wealthy model & fashionista, she employs her extrasensory gift as a medium to try and contact her brother in his last residence, up for sale to a couple who want to make sure the place is clear of spirits, whether good or malevolent. Along with some jolting encounters with an apparition, she stumbles upon a murder, and then is stalked by someone or something unknown through text messages on her cell phone. The stress factors from grief, fear and overall dislocation may be fracturing her grip on what is real and what is imagined.

Blending psychological complications with supernatural scares and flesh & blood horror from this dimension, the movie bides its time a-building, taking about 35 minutes to reach out and grab you. Then it holds tight for the rest of the run. Stewart’s studied manner of conveying quick-grasp smarts under a protective shell of wounded hesitancy fits the character to a tee. There’s a keen sense of unease throughout, palpably spooky tension vis-à-vis the texting torment, and some genuine jumps in the moments calling for special effects.

No one composer is credited with the spare but effective music choices on the soundtrack, but the end credits are accompanied by the achingly lovely, suitably hurting lament “Track of Time”, sung by Anna von Hausswolff.