TRANSPECOS cuts a tough and bitter trail across an unforgiving piece of the American Southwest desert border region, patrolled by loyalties-tested enforcement agents, endured by desperate migrants and trafficked by ruthless cartel soldados. Dime-budget 86-minute indie, a Crime Pays, Justice Doesn’t, God Sorts It Out story was directed by Greg Kwedar, who co-wrote with his producing partner Clint Bentley.

A seemingly routine day in the life of a trio of US border cops becomes a fight for survival when a simple inspection turns lethal, drug payoff rears its do-or-get-dead specter and moral quandary coils around the lawmen in layers tight enough to un-nerve a rattler. Agent ‘Flores’ (Gabriel Luna) tries to untangle the mess kicked over by green recruit ‘Davis’ (Johnny Simmons), part of which includes the serious wounding of their trainer, cynical veteran ‘Hobbs (Clifton Collins Jr.): the men may be in the same line of work but they have diametrically opposite views of how to handle things.

There are a small number of supporting players, but the fourth major character is the beautiful but harsh desert landscape itself, an impersonal witness to the human folly, tragedy and resolution taking place upon it.

Though there are some nagging loose ends regarding behavior, procedure and likelihood, the tension builds to a compelling degree, the acting is tight and the fine cinematography from Jeffrey Waldron, using locations in New Mexico, adds a great deal. Political grandstanding is avoided in favor of simple one-on-one human elements; there is some violence but it’s a character piece, not an action film. A fadeout plus is the soundtrack finishing with the song “Afraid Of Everyone” by The National, a fitting requiem.

It took just 15 days for director Kwedar to shoot the little story, his feature debut, shown mainly at film festivals in 2016. With Julio Oscar Mechoso, David Acord and Alma Martinez. 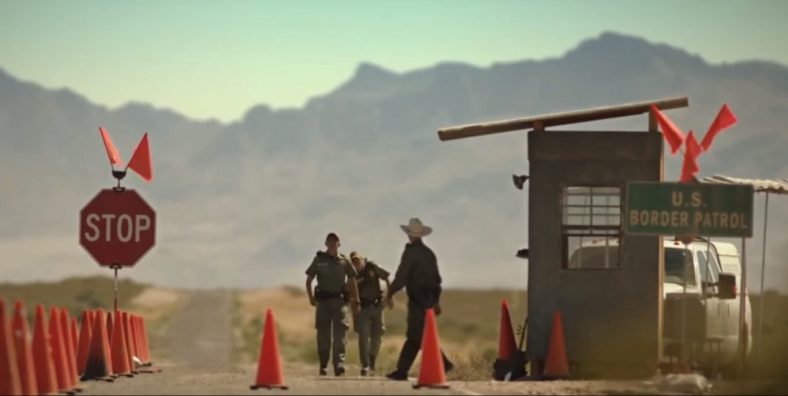