STARSKY AND HUTCH, given how feeble most adaptations of old TV series are, is better than it has any right to be, with some good chuckles spattered around its 101 minutes, jazzed up by director Todd Phillips in 2004.  Star buddies Ben Stiller and Owen Wilson earn the grins and snorts cavorting as fun facsimiles of the super-tuff cops played by Paul Michael Glaser and David Soul on the small screen back in 1975-79. The bad boys legendary pinstriped Ford Gran Torino is back in action, burning rubber over the thug-ridden street of ‘Bay City’ California. Cool gunfights and hot chicks, man—that’s the job. 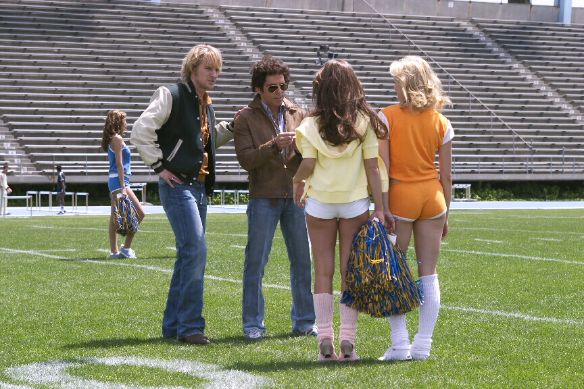 Crime kingpins ‘Reese Feldman’ (Vince Vaughan) and ‘Kevin Jutsum’ (Jason Bateman) are dusting Bay City with some potent blow. Hard-wired ‘Starsky’ (Stiller) and laid-back ‘Hutch’ (Wilson) are teamed up and unleashed, and with help from ‘Huggy Bear’ (Snoop Dog), who knows the streets better than he knows how to roll a fatty, the macho dudes lay waste to the underworld.

“A floater. Nothing harder to solve than a floater. No prints, body’s usually bloated, it’s next to impossible. All right, I say we push it out and hope the current pushes it down to the next precinct.” 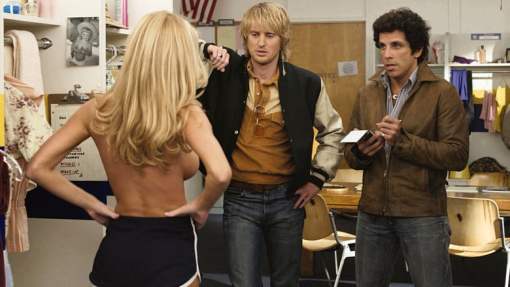 Wisely—if that word applies for something like this—set, like the series, in the 70s, it’s a silly homage done with affection instead of condescension: Stiller, Wilson and Mr. Dogg are perfectly cast to send-up the posing and roughhousing that characterized the series, obviously inspired by rule-breaker-cop flicks like Dirty Harry and Freebie And The Bean.  *

Amusing ‘period’ music score by Theodore Shapiro complements the gags and gunfire. Wardrobe and hairstyles are spot-on. Screenplay is from John O’Brien, Scot Armstrong and director Phillips. The $60,000,000 entree was a hit, racking $170,268,000.

* Nothing if not prolific, in 2004 Stiller was also in Meet The Fockers, Along Came Polly, Envy, and Dodgeball, while bud Wilson showed up a matching number of times—Meet The Fockers, The Big Bounce, Around The World In 80 Days and The Life Aquatic With Steve Zissou. To date the pair have appeared in a dozen films together. 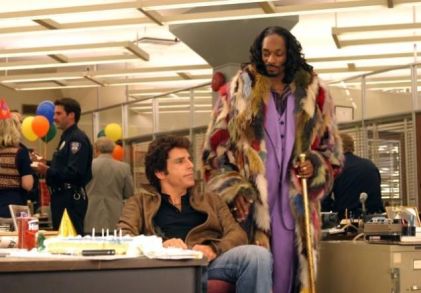 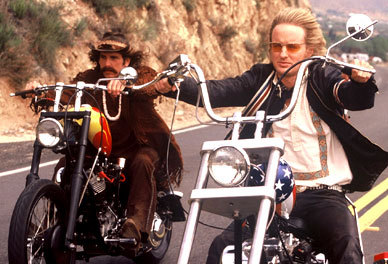