THE LAST VALLEY was left undiscovered by moviegoers in 1971, their loss ascribed to several diverging paths that led to a box-office box canyon: apparent editing edicts from the studio that truncated what should have been a full 3-hour epic into just 125 minutes, difficulty in marketing what seemed old-style in a climate that had snidely hip critics on auto-pilot deriding tradition and restless younger audiences flocking to trendy fare like A Clockwork Orange, The French Connection and Dirty Harry. It’s a good film marked by flaws that kept it from excellence, but undeserving of the sorry fate dealt it from the fickle and the faddish. A tough sell from the get-go, with a literate script that roils with arguments over philosophy, religion and morality, set in a dark time when the entire populations of cities were slaughtered, people (mostly women, naturally) were denounced as witches and burned at the stake and plague was epidemic. As announced in the Prologue: “The Thirty Years War began in 1618. It started as a religious war – Catholics against Protestants. But in their relentless pursuit of power, princes of both faiths changed sides as it suited them and in the name of religion butchered Europe.”

South-central Germany in 1641, the 23rd year of the war. Simultaneously, and by accident, two men—two different types of men—stumble upon a beautiful valley which isolation has so far shielded from plunder and rapine. One, a teacher named ‘Vogel’, is alone, fleeing the horrors that saw his family massacred. The other is ‘The Captain’, leading a group of ruthless mercenaries who live by and off violence. Vogel is an intellectual, a romantic, but also opportunistic enough to convince the calm, cold and pragmatic Captain to spare the peaceful, bountiful valley and its inhabitants, at least through the winter. Vogel acts as intermediary between the hamlet’s leery leader, superstitious peasants, and fanatic priest, and the Captain’s restless, temporarily pacified pillagers. Trust hard to come by, how long can the truce last? 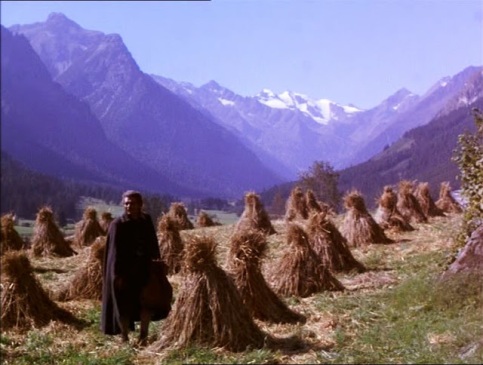 Taken from a 176-page 1959 novel by James B. Pick, it was produced, scripted and directed by James Clavell, who at the time was flush in the success of his novels “King Rat” and “Tai-Pan”, as well as having scored a big cinema hit doing triple-duty on 1967s To Sir, With Love. Given a large budget and popular stars to go with the daunting responsibilities, he delivered a complex, intriguing, often striking ‘intimate epic” that was flawed in the editing—cut down enough, especially in the last quarter, that it feels choppy—and is not sufficiently exciting in its few but crucial action scenes. He bit off more than he could chew. Yet despite those debits his film has much to recommend it, even if the critics sniffed, the studio fumbled and the public was distracted not just by cops & robbers, but by a general lack of historical awareness: a bare handful of movies have ever dealt with this period—and those just tangentially—this is the only one jousting with it directly. *

It’s a lush, evocative, unsentimental, often brutal picture (though not wrecked by gratuitous focus on mayhem), blessed with superb cinematography (originally in 70mm Todd-AO) from Norman Warwick and John Wilcox that captures intoxicating Austrian locations around Trins, and the Gschnitz Valley in the Tirol, near Innsbruck. John Barry provides a subdued, yet properly portentous soundtrack that has earned much upon-reflection praise. **

‘The Captain’ is Michael Caine, 36 at the time, sporting a command-confident beard and precisely clipped, quite effective Germanic accent, excelling in one of his best roles of the decade (to go with The Man Who Would Be King and Sleuth) as an iron-willed leader whose warrior instincts have not quite erased his humanity. Omar Sharif (a year older) does easily his best work of the 70s as what’s effectively the conscience of the crowd; humane and hurt, but shrewd enough to know how wield his wits in a world that’s lost its own.

Grosses only came to $2,300,000 in the States (a disastrous 102nd place), and though it took in more than twice that abroad, measured against the $6,250,000 production cost and what it then needed to recoup (factor 150% more for prints, insurance, ads), it lost $7,185,000.  Caine gave another good performance in another interesting and flawed historical saga that failed that year, Kidnapped, and gambler Sharif lost out big with the flops of The Horsemen and The Burglars: after Funny Girl, he battled through nine duds in a row.  Clavell put an end to his movie career (which included, lest we forget, the scripts for The Fly and The Great Escape) and got to work on his next book, a little muse he called “Shogun”. ***

* Supporting player George Innes: “They built an entire village, using local people. It was quite amazing. It was a huge movie, but the problem was they had to cut it down. Clavell said, ‘They’re going to make me cut this, they just won’t show a film of this length.’ That’s what really did it in. The Last Valley is a movie of great scope but it lost a lot in the cutting.”

Mere pieces of the nasty conflict from four centuries back figure in a segment of 1933s Queen Christina, in the battle scene from the 1990 version of Cyrano de Bergerac, and in A Jester’s Tale, an obscure but well-regarded 1964 Czech anti-war comedy using animation. Sure is a good thing that intolerant religion, for-hire warriors and clueless leaders don’t play any part in our civilized world of today. 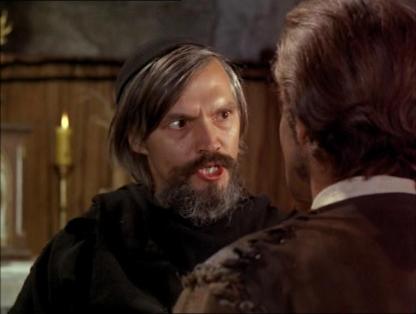 ** Barry’s score makes use, in German, of “Tears Of The Fatherland”, a poem written by Andreas Gryphius (1616-1664). I intended to include a partial translation, but since several versions appear in various sources on-line, and as your blaspheming scribe does not speak the language, fearing that  picking the wrong one would further confuse understanding the rational mid-1600s, we leave it to the curious reader to check them out and find that which feels right. Powerful stuff.

*** Sharif: “What killed my career was appearing in a succession of films you wouldn’t turn down. They were by good directors, but they were bad films.” He specifically mentioned Behold a Pale Horse, The Appointment and The Horsemen, but he was also hurt by Che!, Mayerling, The Night Of The Generals, Juggernaut, MacKenna’s Gold and Ashanti. Iffy flix or not, who doesn’t like Omar Sharif?

Herr Caine, from 1997: “It went completely nowhere. It’s my elder daughter’s favourite film – not only of mine, but of all time. I thought that was a wonderful film, with an unbelievable score by John Barry.”

One thought on “The Last Valley”