TO SIR, WITH LOVE wins you from the very start, with the pop classic title tune sung by cast member Lulu. While the gentle outlook of this 1967 favorite may be carbon-dated by generations of ever-decreasing civility, the nostalgic call of its decency hasn’t dimmed. That’s thanks to the innate strength and graciousness of its leading man, the sparks from a fresh and disarming supporting cast and the emotional tidal pull of its bedrock hopefulness. Written, produced & directed by James Clavell for just $640,000, it became the year’s 7th biggest hit, grossing $47,800,000, and the uplifting title song was the year’s best-selling single. *

No luck at getting the engineer work he was trained for, ‘Mark Thackeray’ (Sidney Poitier) takes a job teaching at a hard-case school in the East End of London. An outsider from the get-go (he’s Afro-English from British Guiana via California), Mark gets the requisite hard time from his cynical, unruly students (equivalent to a American high school’s senior class) but is determined to tame their excesses enough to actually make them pay attention and maybe even learn something.

For Poitier, more than his breakthrough Oscar win for 1963’s fable Lilies Of The Field, 1967 was his year, with the glossy Guess Who’s Coming To Dinner the 4th biggest hit, and the sweaty In The Heat Of The Night the 11th. He’s pleasant in the first soft-sell entertainment (Okay, be my son-in-law), and iconic in the tension-racked second (smarts, balls, a nice suit and a wicked backhand), but ‘Sir‘ is his warmest, most audience-seductive character.

Notable in support: winsome Judy Geeson, 19, making her debut as Sir-smitten student ‘Pamela Dare’; Christian Roberts, 22 in his debut, as hard-to-reach ‘Denham’; and Suzy Kendall (what a smile!) as fellow newby teacher ‘Gillian Blanchard’, who Sir would be borderline bonkers not to do homework with.

Two scenes are most affecting: the beaming faces of the students assembled for the museum field trip, and the gift-giving finale. Heart tug time.

* When the title tune was ignored at Oscar time, both director Clavell and Lulu’s manager lodged complaints over the exclusion (didn’t help). With the exception of “The Look Of Love” from Casino Royale the other songs on the list were vapid, including the insipid winner “Talk To The Animals”, given as sop to the bloated Doctor Doolittle.

The movie made Sidney Poitier a rich man. Instead of a large salary, he signed on for just $30,000, but took 10% of the gross. That’ll teach ’em. Poitier, Geeson and Lulu re-teamed 29 years later for To Sir, With Love II, done for TV by director Peter Bogdanovich.

Though adored by audiences, one person was notably irked. E.R. Braithwaite, the Guyanese-born author who wrote the autobiographical 1959 novel it was based on, grouched “I detest the movie from the bottom of my heart.” Yeek!  Maybe he didn’t like that another author, mega-seller Clavell, wrote the screenplay. Certainly its success got more people to read his book. Mr. Braithwaite lived to be 104.

Sir was cross-Atlantic mirrored in ’67 by another beleaguered mentor story, the well-done Up The Down Staircase. 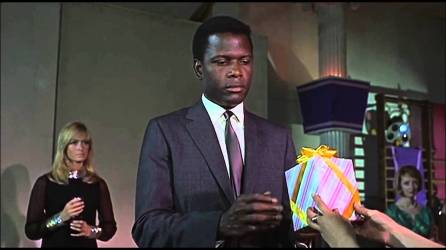 One thought on “To Sir, with Love”