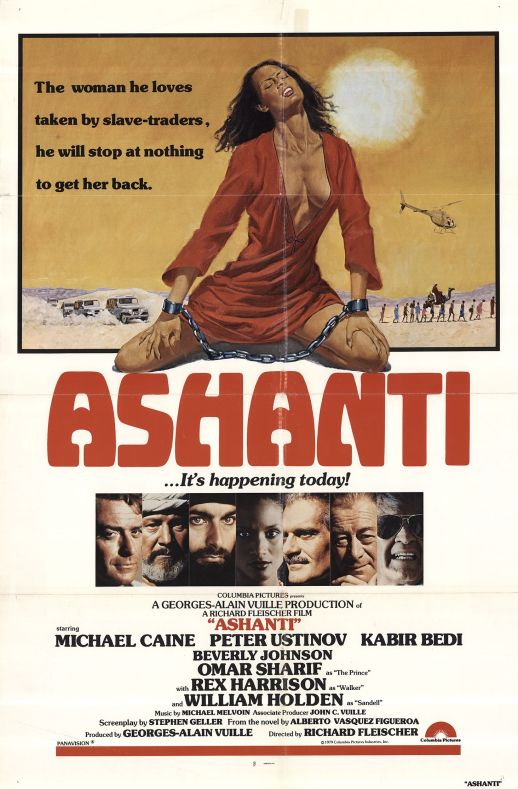 ASHANTI was a bollixed-up adventure released in 1979, its original budget of $7,500,000 possibly going as high as $11,000,000, one director dropping out, his replacement and numerous personnel getting sacked two-thirds of the way through, searing desert temperatures felling camels and sizzling star tempers. Critics sniped, and such play-dates it was given only sufficed to scratch up $1,700,000, nose-diving into 121st place for the year. *

Husband and wife doctors on a mission in West Africa experience the terror of modern-day slavery when the wife is kidnapped. She’s taken by caravan across the Sahara to be sold into sex servitude to a rich Arab prince, coolly awaiting his new plaything on his yacht in the Mediterranean. The husband, using whatever help he can muster, sets out on a desperate tracking mission to find her before she disappears forever. 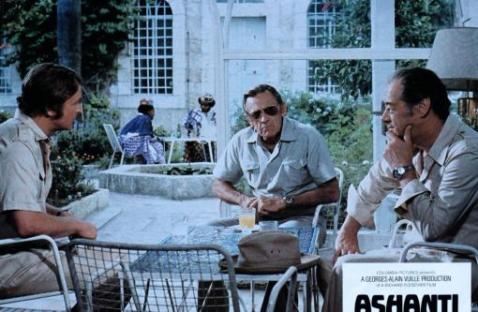 The script by Stephen Geller (Slaughterhouse-Five) with uncredited input from George MacDonald Fraser of “Flashman” fame, was based off the 1977 novel “Ebano” by Spain’s prolific Alberto Vázquez-Figueroa. Richard Fleischer directed, and Aldo Tonti did a fine job with the cinematography of extensive location work in Egypt, Kenya, Israel and Sicily.

Estimable cast: Michael Caine as the frantic husband, Rex Harrison and William Holden in late-career cameos as cynical Africa hands who help out, Peter Ustinov as the oily slave master and Omar Sharif as the smugly certain prince. The plum role of the trafficked wife was seized by Beverly Johnson, 26, known for being the first African-American supermodel. Along with displaying stunning beauty, she clearly had honed a razor edge for competition, as she saw that the actress already hired—another Beverly, Beverly Todd—was axed from the project. She acquits herself well enough, and the pros are just that, though Ustinov’s bad guy—the first he’d done in decades—strays close to camp territory.

Action scenes are perfunctory, and the music score (by Michael Melvoin) is lousy—the setting and story cried out for someone with a touch like Jerry Goldsmith. Though marketed with an exploitative leer in the poster art and advertising, the film itself plays fairly respectful in its treatment of the subject. Perhaps it was just paycheck time for the celebs (Holden’s too-brief stint done just so he could hang out in his beloved Africa and get paid for it) but there was a reason these folks all had star power, and they make even mediocre material work.

* Called by Michael Caine “the worst, most wretched film I ever made,” a ripe Cockney mouthful from the bloke who headlined The Magus, Too Late The Hero, The Swarm, Beyond The Poseidon Adventure, The Hand, The Island, Victory and Jaws: The Revenge. While this picture may have been a bastard to endure on location, in retrospect we think Sir Michael judged the result too harshly (refer the above list). It’s a flawed film, but holds the interest, thanks to the built-in-quease/fascination of the subject matter, the acting and the visual package. Better than its sorry fate and lingering rep as a dog.

Fleischer replaced Richard C. Sarafian (just as well, if you’ve ever fallen victim to The Man Who Loved Cat Dancing, Eye Of The Tiger, Sunburn or The Next Man), yet the blistering shoot took a toll on him as well, as lore indicates he suffered a sunstroke. Richard Fleischer’s directorial resume was all over the map, from excellent (20,000 Leagues Under The Sea, The Vikings) to good (Barabbas, The Boston Strangler, Bandido, The New Centurions, Tora! Tora! Tora!) to okay (Soylent Green, Compulsion, Fantastic Voyage) to execrable (Doctor Doolittle, Mandingo, The Jazz Singer): this one falls in the middle of the pack.