THE PROMISE is a sweeping, moving, beautifully produced historical drama from 2016, its storyline, setting and style recalling old-line epics along the lines of Doctor Zhivago. While it doesn’t fully reach the tier occupied by the likes of David Lean or Peter Weir, director Terry George’s 133-minute destiny-entwined love triangle set against a colossal tragedy earns solid marks for the lavish and gallant attempt.

Turkey, 1915. Armenian medical student ‘Mikael Boghosian’ (Oscar Isaac) is betrothed to a girl in his mountain village, but while studying in Constantinople he falls for striking and worldly ‘Ana Khesarian’ (Charlotte Le Bon), who is already involved with ‘Chris Meyers’ (Christian Bale) a dogged American reporter. Turkey uses the war (World War One, the Ottoman Empire sides with Germany against England, France and Russia) as the excuse to exterminate its minority populations. The trio, their families and friends are suddenly swept up in one of history’s most appalling deeds.

George (Hotel Rwanda, In The Name Of The Father) rewrote the initial screenplay done by Robin Swicord (The Perez Family, Matilda). Filming was on stunning locations in Portugal, Spain and Malta (Turkey, a full century into craven denial, was utterly out of the question), with many hundreds of extras in richly detailed recreations of country and city, luxury and ruin, horror and endurance. CGI is kept to a minimum, and is well-handled. Stoked with a host of characters and vivid incident, the story culminates with the dramatic events on the coastal mountain of Musa Dagh (read Franz Werfel’s “The Forty Days Of Musa Dagh”). The three intense leads mesh, and are backed by a well-picked lot of supporting players. Hats off especially to an impassioned Oscar Isaac, who never fails to impress. 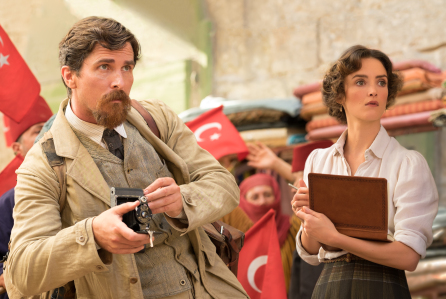 After film festival premiere in the fall of 2016, it was wide-released in the US the following spring. Effusive celebrity endorsements from Leonardo DiCaprio, Cher, Sylvester Stallone, the Kardashsian’s and George Clooney sought to stir support but the indifferent and/or uneducated public stayed away and controversy-skittish foreign release was minimal: further hampering was an Internet campaign that sought to tilt online viewer vote tallies to negative (take a wild guess where this originated). The gross was only $11,720,000. Against a cost of $90,000,000, factoring in advertising expenses it lost a traumatic $102,100,000. *

“My darling Yeva told me that her greatest wish was that her parents and our dear Ana were here. I told her I know that they ‘are’. For sure, they are here. And all of your parents and all those families lost in an attempt to wipe our nation from the face of the earth. But we’re still here. We’re still here.”

* That titanic loss was however borne posthumously by the legendary Armenian-American investor Kirk Kerkorian. The billionaire philanthropist footed the entire production cost but passed away a month before filming began, age 98. All proceeds went to charity. And the film probably brought more attention to the atrocity than any single action since it occurred a century before. MGM planned a picture back in 1934 to star Clark Gable, but the Turkish government stymied the idea. Much later, Stallone and then Mel Gibson each tried to mount a project but again were dissuaded by officialdom threatening censure. Only a handful of movies have finally dared tackle the subject, with most coming out within a few years of each other. Russell Crowe’s 2014 The Water Diviner is a mixed bag, and The Ottoman Lieutenant was demolished by critics and historians in 2017.  2014’s The Cut is very well done: it makes a fine, suitably somber companion to this sadly neglected epic.

Like Japan with its horrific war crimes from 1931-1945, Turkey needs to own up. Fat chance. In a just world movies like The Promise and The Cut would not be needed. Our world is a lot of things: ‘Just’ doesn’t seem to be one of them.  Adolf Hitler, on the eve of invading Poland: “After all, who remembers the massacres of the Armenians?”  A reminder to the simpletons among us seeking to purge ‘undesirables’: power-crazed lunatics don’t stop until They are stopped. Their purifying axe eventually falls on you, too.

2 thoughts on “The Promise”