SPEED 2: CRUISE CONTROL boasts a reasonably clever title, as this 1997 sequel to the 1994 hit Speed sets its action plot on a luxurious cruise ship plying the seaways of the Caribbean rather than aboard a homely city bus coursing through the freeways of Los Angeles. Catapulted into stardom by the runaway success of the first film, 32-year-old Sandra Bullock returned (buoyed by a healthy paycheck 18 times bigger than the original) but co-star Keanu Reeves begged off, with an intense but less-known brooder, Jason Patric, taking the stud reins. Amping up the nutty villain juice from Dennis Hopper’s bus-bombing madman is computer system hacker Willem Dafoe, taking revenge on the cruise line by setting the ship on course to plow into an oil tanker. Directing was in the hands of Jan de Bont, who’d steered the first film and had a smash with Twister in the interim.

This cruiser is a loser, wallowing in waves of hard-to-swallow situations, little chemistry between the leads, jokes that sink like anchors and a seasick cost of as much as $160,000,000—a launch five times what it took to hurtle Speed. Accepted accounting says that with prints, insurance and advertising the movie needed to make about $400,000,000 to break even. It keelhauled with a worldwide take of $164,500,000, docking 39th place for its year. 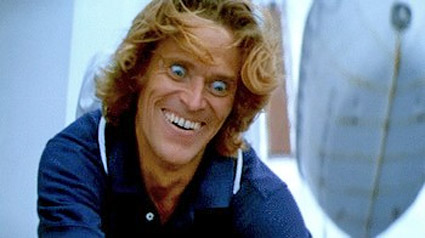 Even the massive-sized climactic stunt,which alone cost $25,000,000 to arrange, doesn’t salvage it by plowing the Seabourn Legend  and two large-scale mockups into dozens of purpose-built structures in the city of Marigot on the island of Saint Martin. A whopper, but too little-too late to save the movie.