DAKOTA —-“And speaking of politics, where we’re going, there are only two parties: the quick and the dead.”  So says ‘John Devlin’ (John Wayne), the amiable gambler fleeced by rascals of the seed money he and his fiancee plan to invest in a railroad around Fargo in 1871. The line about politics ding-dongs with showbiz history irony as the script (not a good one) came from a story conceived by lefty Carl Foreman, who later became a target of the conservative star when he wrote High Noon, which Wayne detested. Duke’s misplaced ire would’ve been better vented on the concoction of this 1945 turkey.

* Director Kane was generous about Miss Ralston: “She was very nice to work with. She was in the same sort of position with Yates as Marion Davies was with William Randolph Hearst. So, if she’d been that sort of person, she could have made it rough for everybody. Naturally, when you’re in that kind of position with the boss, you can do anything you want. She never took advantage of that situation. She was always very cooperative, worked very hard, tried very hard. But you know, the public is a very funny thing. The public either accepts you or it doesn’t, and there’s nothing you can do about it. If they don’t go for you, that’s it.” 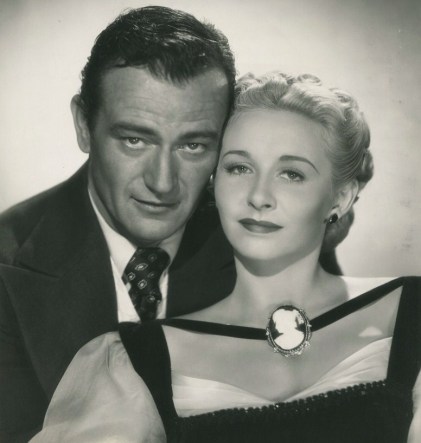