THE MUMMY stalked into 1959 in vivid Hammer Studios Technicolor, inaugurating the second run for the character begun a quarter century earlier with Boris Karloff. The script, from Jimmy Sangster, actually makes a squash-up of ideas from three of the goofy four that followed the mute and musty murderer into the 40s. While not as successful as Hammer’s The Curse Of Frankenstein and Horror of Dracula, this did well enough that it, too, produced three limping followups. “He who robs the graves of Egypt dies!” *

This is one of those “Hey, Take Another Look” nuggets that, for this scribbler, then fall into the affectionate “Wish I’d Seen It As A Kid” trough, as an appreciative look at its strong points through older eyes sees why it would have captured lifelong fans (like the esteemed Glenn Erickson). 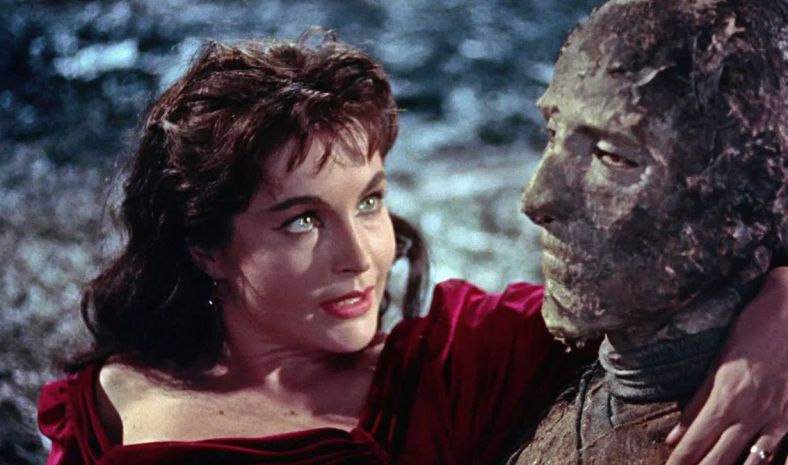 Egypt, the 1890s. Opening the tomb of ‘Princess Ananka’, high priestess of Karnak, a father-son team of British archaeologists let curiosity get the better of caution, and suffer the wrath of the reawakened mummy ‘Kharis’, everlasting lover, defender and avenger of the long-gone-but-never-forgotten princess. A devoted worshiper of the ancient traditions follows the Englishmen home, Kharis in tow. He strikes!

Logic goes out the window in Mummyland, so it’s up to the handling of the material and the trappings to provide pillars of fun for disbelief to relax on. Directed with some flair by Terence Fisher, this benefits from the nifty cinematography by Jack Asher, some  sudden and effectively blunt action moments, and the astute casting. As the son half of the cursed Brit team, Peter Cushing muses that it “Seems I’ve spent the better part of my life amongst the dead.” Whether this admission is tonic or toxic to his wife (the becoming Yvonne Furneaux) is moot, as she bears a remarkable resemblance to Ananka, enough that the speechless (his tongue snipped a few thousand years back) and shotgun-blast-resistant Kharis confuses her with his bygone beloved.

Christopher Lee’s physicality makes this version of the Mummy much more of a viable threat than in the earlier cycle of flicks, which relied on victims being so awestruck with terror that they couldn’t move (cue strangling), when it was obvious a turtle could outrun the foot-dragging fiend. The civilized and calm Cushing is fine as ever, hypnotic-eyed Furneaux (The Master of Ballantrae, La Dolce Vita, Repulsion) is a mix of haughty and naughty, and Kharis’ fervent handler ‘Mehemet Bey’ is aced across by George Pastell. Cushing’s colonial tomb raider and Pastell’s homeland watchdog have a well-written, era-appropriate sparring over the ethics of treasure rights. ** 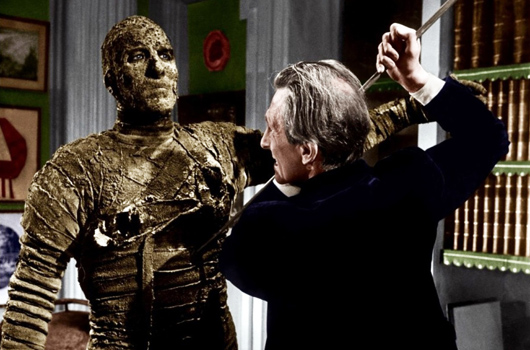 As in The Curse Of Frankenstein and Horror of Dracula, the insertion of broad, low-brow comic relief is painful to witness; needless spell-breaking stuff that may have drawn chortles in Blighty sixty years ago but charms like a toothache today. Assisting greatly in the other direction is the dramatic soundtrack composed by Franz Reizenstein; his lavish orchestral arrangements start the movie off with a welcome crash. Film also had killer poster art. 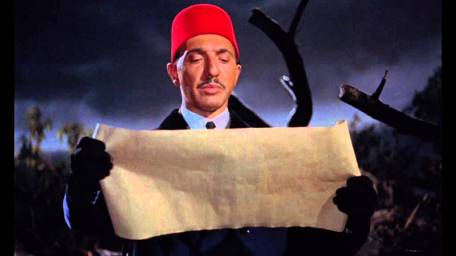 ** Read up. Brian Fagan’s “The Rape Of The Nile: Tomb Raiders, Tourists and Archaeologists in Egypt” reveals that the plunder run began long before British, French and German empire scoopers went snooping in the sand. The ancient Greeks, those Romans, Coptic Christians….greed is universal. Despite nearly two centuries of laws and restrictions to combat it, the looting continues. Covet if you must, but gird for curses.

As to what this 1959 venture into vaults means beyond chilling out with sarcophagi,  Glenn Erickson at CineSavant (all hail) cites the perspective from author Peter Hutchings (“Hammer and Beyond:The British Horror Film”) that the story here has a lean to feminine empowerment.  Cushing’s bland, sex-oblivious husband (with a game leg) seems to ignore his luscious wife, and Lee’s mourning Kharis has sacrificed his faith, surrendered his life (and tongue, read whatever into that) for all eternity on account of a woman not just gone but D-for-dead. Craven fools we men-types be. On the other hand (the one Kharis is choking you with) you could easily posit The Mummy as the original Stalker, which kind of dampens the whole Priestess Power position. Finally, it’s a Mummy movie, already!….