SKYSCRAPER is scaled by an action hero with convincing gravitas, Dwayne Johnson, who tirelessly keeps the hits (and some misses) coming. This 2018 audience-gobbler is a blend of Die Hard with The Towering Inferno, deploying enough impossible-to-escape situations for both and some left over for Tom or Keanu. Alas, its derivative, paint-by-numbers script hasn’t the freshness and wit of the first or the star-power cast of the old toastie. It does boast elaborate pyro effects to burn and plenty of the towering Rock, so that will suffice for many of the less-discriminating. 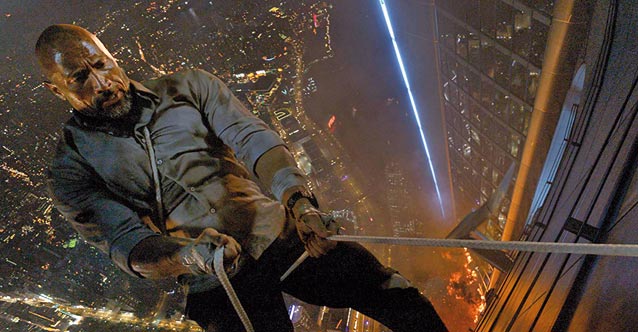 Here, the hero-a-solo isn’t a rumpled and quip-equipped cop with a bad attitude, but a genial family man and war vet (with an artificial leg) who does security for the rich toffs who own a 225-story behemoth in Hong Kong (‘Inferno’s San Francisco kindling was a mere 138—yes, we have come so far).  A clique of ruthless international terrorists seize the skyscraper and set it ablaze. Our John Dwayne not only must rescue his wife and two kids from the firestorm, he’s blamed for it, and has to simultaneously outfox the Hong Kong police, fight the bad guys, save the family and do it all while clambering precariously up and around the vertical uproar. With an artificial leg.

The daredevil stuff is wildly overdone, but fitfully amusing: it’s hard not to like Johnson plowing through this kind of monkey business. Apart from the extreme unlikeliness of the entire enterprise, the invest-in-jeopardy angle is weakened by a dullish set of villains. Among those evildoing, death-destined scuzz, the only one with a jot of charisma is played by Hannah Quinlivan.

We like our merciless female terrorists hot and fashion aware

As Johnson’s wife, Neve Campbell handles her part of the action with aplomb. Robert Elswit’s cinematography is a real plus, and the special effects are grade-A: the building is a beaut and the firestorm a requisite dazzler. Taken straight, the movie is a hokey joke; with a grain of salt (okay, a bag), it’s fair ’nuff free-fire fodder. Rock on. 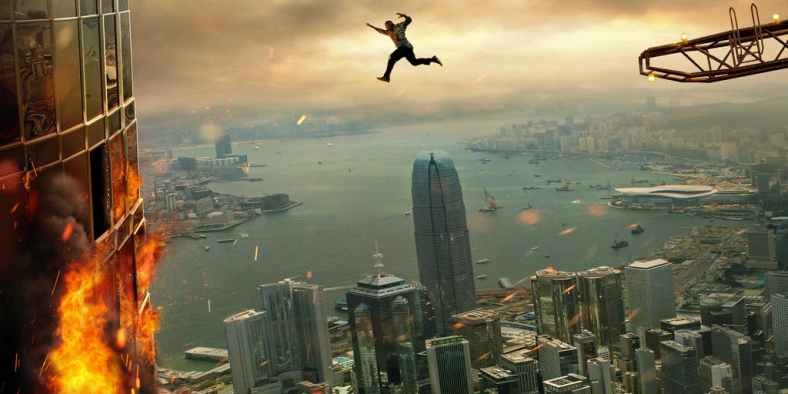