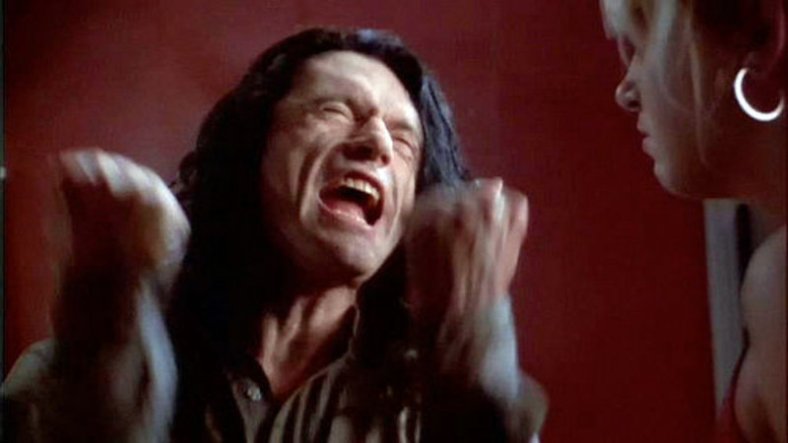 THE ROOM is best approached—in a stupor. For sure, if you watch it, you’ll be in one when it’s over. Wowza, where to start? When the Earth cooled? A film ‘experience’ that defies everything known to math, religion or your friend Darryl who almost got on Jeopardy.  If a garden variety Bad Movie—Gigli, Showgirls, Porky’s 2, Saw III—slapped your sister around, you would pummel it snotless in front of a crowd, ala Sonny & Carlo in The Godfather. If The Room slapped your sister around, you’d shove a hornet’s nest on its head and drag it into a cellar for a week with some power tools and a wolverine. They don’t make font sizes on gas-giant Jupiter big enough for how BAD this is. All that and so much more is why we wholeheartedly recommend it. “Leave your stupid comments in your pocket!”

Let’s get the ‘plot’ out of the way: ‘Johnny’, a banker (of some unknown-to-economics breed) loves fiancee ‘Lisa’, a slut (known all too well). Lisa desires ‘Mark’, pretty boy dork and Johnny’s best friend (except when he isn’t). ‘Denny’, a…is, well, Denny loves Johnny and Lisa. How will it end?

After 99 minutes it does end, and you look in the mirror to see your hair has turned polar white. Such is the dramatic power of The Room, an emotional rollercoaster that makes WW2 look like Space Mountain with no-one in line but you and a nude Margot Robbie. My point is pointless, but it’s found a split-level home in this modern classic from 2003 (and change).  “I don’t want to talk about it.” 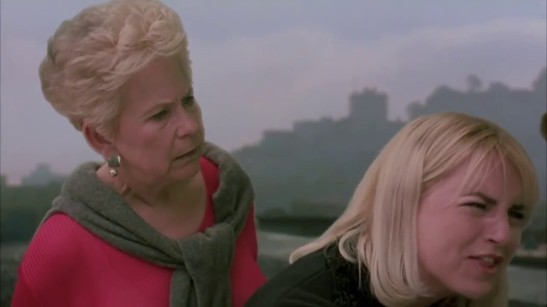 ‘Johnny’ is Tommy Wiseau (memorize that name because someday he might be President), a ‘European’ ex-pat to the States (payback for culture-void American tourists abroad?), who through possibly dubious means amassed enough money to launch this artistic titan. ‘European’, because it’s never exactly been established where he spawned from—a good guess would be Transylvania, since he resembles someone who spends a lot of time in coffins. He’s got that junkie-from-Skankville vibe as well. Anyway, Mein Tomf not only starred himself—he wrote, produced & directed this opus. In the opener credits, he does away with bourgeois modesty and the fascist ampersand and gives us three full-on credits—“Written by Tommy Wiseau”. “Produced by Tommy Wiseau.” “Directed by Tommy Wiseau.”  Do you feel like a pedestrian pygmy in the face of such a Wellesian torrent of tommy-taunts?

Now, all this was after he first wrote it as a play in 2001. The play became a 500-page book (that no-one would publish). Rejection bred photo-genesis, and filming took six months, with many crew members quitting or being fired. On “release” (like you would a plague) in 2003 the auteur effort was not well-received (by anyone)—with a flea-flatus take of around $1,800. Undeterred by something as absurd as society, Wiseau proceeded to promote it with a fervor Al qaeda would shrink from, including a billboard in Hollywood that stayed up—at a cost of $5000 a month—for five years. The movie eventually consumed $6,000,000, of which perhaps $600 is visible on screen.

Cult status arrived like a fungus, and grows now with each new inductee: the amazing colossal awful of it all resulted in an actual good movie being made about the making of this one, James Franco’s 2017 hit The Disaster Artist.

Others snaring their big break include Carolyn Minnott (Lisa’s nasal warfare mom), Kyle Vogt (falling-down-tuxedo-football-guy) and Robyn Paris (the one person in the cast with some possible actual talent).   “I’m tired, I’m wasted… I love you, darling!”

Friends, you have to see this yourself: there is little anyone on this planet can do to convey how wonderfully atrocious the acting, writing, directing, editing and set design are. To be fair (“why?”, a good question), a few snippets of the photography are decent and the opening music scoring by Mladen Milicevic indicates maybe something may have value. Look, just get it and watch it. If you can stick past the first jaw-collapsing half-hour, you’ll begin to laugh more and more, and by the end you will think “Forget the phone bill. The trip to Tahiti can wait. My wife can drive herself to the hospital. I have to get a copy of this incredible piece of shit…”  *

* Bad movies—there are, of course, thousands. In earlier incarnations of this site I included brief swipes at many I’ve endured, but since scrubbed over 300 (keeping several dozen) that I felt were a waste of space and could be better investigated elsewhere on the Internet. There are any number of “well-made” films that are downright repugnant—lot’s of horror/slasher material for example–and hard-put to excuse under cover of ‘art’ or ‘freedom of expression’, blahwankyadda. There are well-known movies that have a bad rap unfairly attached to them (critics making a name for themselves over the bones of someone else’s hard work, then a second-wave of lazy tag-along snipers who think it’s somehow smart to wee-wee on big ticket gambols)—perhaps Cleopatra could serve as a legendary example. There are the FUN bad items—teen exploitation films of the 50s, dumb low-budget sci-fi entries from various volcano-lands, The Conqueror, The Oscar, the Ed Wood canon, etc.   I’m here to say—The Room occupies an entire floor of the Bad Castle all to itself.  All Hail, Tommy!   “YOU ARE TEARING ME APART, LISA!” 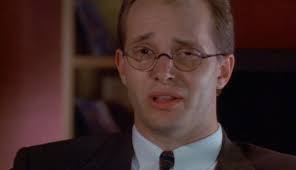 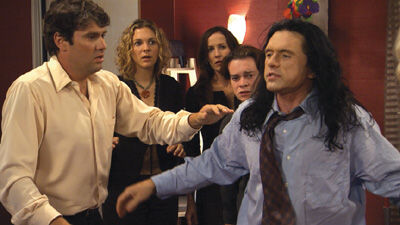 One thought on “The Room”